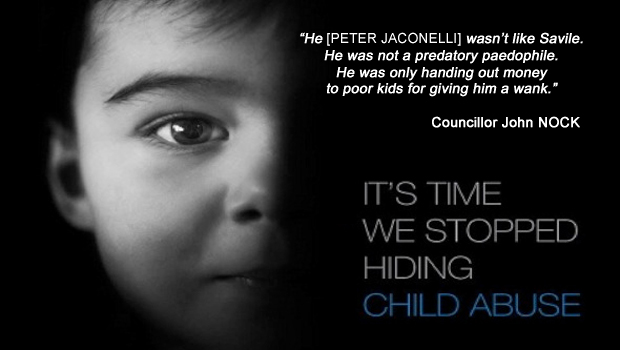 Readers may remember an article of mine published on 21st November 2015, under the title “JACONELLI Apologist: SBC Cllr John NOCK”.

The article reported on the extraordinary behaviour of Councillor John NOCK [Con.] (Mulgrave ward), who had shared his opinion with fellow elected members, in the prelude to a Special Meeting of Full Council on 23rd October 2015, convened for the purpose of bestowing the civic honours of Freeman of the Borough on two worthy citizens and Alderman of the Borough on five former Councillors, that Peter JACONELLI was somehow not as ‘bad’ as Jimmy SAVILE. Not unlike stating that Peter SUTCLIFFE was not as bad as Dennis NILSON. But it turns out that Councillor John NOCK [Con.] claims to have been making a very fine distinction.

Councillors were shocked to hear that it was Councillor John NOCK’s considered opinion that another Alderman of the Borough, former Mayor and Councillor Peter JACONELLI, was not (contrary to the resolution of his own Council and the stated opinion of the North Yorkshire Police) a predatory paedophile in the same mould as his close associate and fellow member of Scarborough’s notorious paedophile-ring, Jimmy SAVILE, with whom JACONELLI co-offended for decades.

According to the words of Councillor John NOCK [Con.], as reported to me verbatim:

“He [JACONELLI] was not a predatory paedophile. He was not like Jimmy Savile. He was only handing out money to poor kids for giving him a wank”.

In my 21st November 2015 article, I predicted the outcome of the ensuing Standards Committee hearing as follows:

“I suspect that we may now look forward to a protracted exercise in flimflammery (with its concomitant drain on Council resources), the result of which will in all likelihood be that Councillor John NOCK will be ‘sentenced’ to the maximum sanction – fifteen minutes of re-training with the Monitoring Officer, that paragon of moral probity, Lisa DIXON.”

All three reports quote the Minutes of the SBC Standards Committee hearing thus:

“Councillor John Nock explained that he believed he was having a dispassionate discussion about what Peter Jaconelli’s behaviour should be described as, admitting that he was playing devil’s advocate by drawing a distinction between Savile and Jaconelli’s respective targets.

“In strict terms, this made Savile a paedophile, and Jaconelli a hebephile. Councillor Nock went on to deny vehemently the wording which had been attributed to him in the complaint, including the use of crude, colloquial language to describe Jaconelli’s activities.”

“Hebephilia” is an artificial classification suggested by researcher Ray BLANCHARD (and others) in 2009. It seeks to make a distinction between “paedophilia” and “hebephilia” by reserving the former term for the sexual abuse of children up to age 11 and the latter term for the sexual abuse of adolescents in the age range 11-14. It has not been adopted by the wider scientific community and is generally acknowledged to be irrelevant from a moral perspective and of significance only in diagnostic terms.

Quite how this “paedophile/hebephile” distinction could in any way ameliorate Councillor John NOCK’s remarks is not made clear by the Standards Committee. Substituting the phrase “11-to-14-year-olds”  for the word “kids” in Councillor John NOCK’s reported sentence “He was only handing out money to poor kids for giving him a wank” – i.e. “He was only handing out money to 11-to-14 year-olds…” – still leaves him having made very light indeed of Peter JACONELLI’s serial sexual abuse of children.

It typifies the weasel words that are invariably deployed to protect loose cannon Councillors. I would be unsurprised to learn that Councillor John NOCK [Con.] was provided with the word “hebephile” by the very people whose duty it is to conduct the hearing impartially.

Moreover, the fact that Councillor John NOCK appeared to condone Peter JACONELLI introducing minors to prostitution (as long as they were over 11 years of age) seems to have escaped the Standards Committee completely. One has to wonder about the mores of a Standards Committee membership that baulks at the word “wank” (how shocking!) but allows JACONELLI’s coercion of minors into prostitution to pass without comment or concern in their Decision Notice. I invite readers to cast around for a suitable epithet with which to characterise the membership of the Standards Committee. [Clue: You won’t have to look far].

Re-visiting Councillor NOCK’s remarks, we note that he made no specific reference to the age of the “poor kids” who were bribed into (dare I say?) “servicing” Peter JACONELLI – only the implication that, as “poor kids”, they could do with the money. “Fair exchange is no robbery” – was that Councillor John NOCK’s intended meaning? Abusing kids is okay, as long as long as they are fairly paid?

So the “paedophile/hebephile” distinction/excuse that he trotted out to the Standards Committee four months after the event – and with some help, no doubt, either from paid public servants or from Google (do you believe for one moment that he knew the word “hebephile” back on the 23rd October 2015? ) – reads very lame to me, even if it did fool the membership of the Standards Committee.

Readers may also wish to take note of the fact that Councillor John NOCK’s fellow Conservative next-ward neighbouring elected member – Councillor David CHANCE [Con.](Mayfield) – shrewdly sent his apologies and did not attend or take part in the Standards Committee hearing. (Congatulations, David. Well left, as they say in mixed doubles. That saved you the discomfort of having to ‘thumbs down’ your chum. Shrewd move).

Of considerable significance,  too, are the remarks Councillor John NOCK [Con.] made to the press, seeking to project the blame for his own conduct onto the two Councillors who reported his rash and disgraceful remarks to the Monitoring Officer:

Let me put that in perspective.

Another rash and digraceful remark.

“4. Conducting yourself in a manner which could reasonably be regarded as bringing your office or the Council into disrepute” constitutes a breach of the Councillors’ Code of Conduct. In my view, there can be little doubt that Councillor John NOCK’s remarks about his easily-identified Complainants are defamatory. Making defamatory remarks about fellow Councillors surely “could be reasonably regarded as bringing your [his] office or the Council into disrepute”.

Councillor John NOCK [Con.] has impugned, in the public domain, the reputations of the two Councillors who, quite rightly, reported him to the Monitoring Officer. Surely he has placed himself once again in breach of Article 4 of the Code of Conduct?

The question now is whether Councillors BARNETT and DODDS will (i) seek redress under defamation legislation, through the Courts, or (ii) pursue the matter for a second time through the Council’s own utterly ineffectual regulatory body – the Standards Committee.

Should they opt for the former (litigation), I could recommend an excellent no-win-no-fee defamation solicitor and a first-class barrister. In which case, my guess would be that the best option for Councillor John NOCK [Con.] would be (i) to publish an unconditional apology to the two Councillors, the public and, most importantly, the victims/survivors of Peter JACONELLI, in the Yorkshire Post, the Scarborough News, the Whitby Gazette and (of course) the North Yorks Enquirer, (ii) to make a substantial donation to a CSA charity of Councillor BARNETT’s and Councillor DODDS’ choice, and (iii) to resign his seat on the Council in the hope that a candidate with a functioning moral compass may be elected.

As for the latter option (another Standards Complaint – via a second Formal Complaint to the Monitorong Officer), there is little to recommend it.

“The committee accepted his apology and found he was remorseful and not condoning the actions of the former Scarborough Mayor but Cllr Nock will be referred to the Conservative group for it to take further action against him.

Conservative group leader, Cllr Andrew Backhouse, said he had met with Cllr Nock, in the presence of the party’s monitoring officer, on Friday and the matter had been dealt with.

He confirmed that Cllr Nock remained a member of the party.”

(The party, that is, whose main pillar is family values).

That is the measure of how ‘soft’ Scarborough Borough Council and the Scarborough & Whitby Conservative Association really are on paedophilia – by whatever name – which goes some of the way to explaining how SAVILE and JACONELLI were able to sexually abuse kids in Scarborough for decades – long enough, at any rate, for their own deaths to ensure that they cheated justice. There is a lot of that in local government.