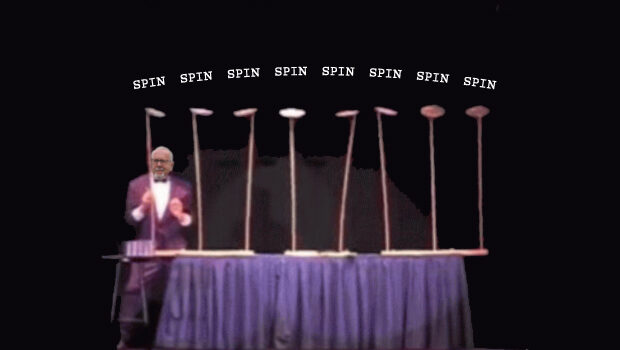 Just a few short hours after the Enquirer scooped the news that five Independent Councillors had tabled a Motion of No Confidence against the current Leader, sure enough Councillor Steve ‘Loose Lips Sink Ships’ SIDDONS [Lab.], rushed into print with a penful of petulance, pathos, pretense, pietism, posturing and pleading – a paragraph a piece (and of course I am just taking the Ps).

Readers who have not closely followed the descent into the maelstrom that began when Councillor SIDDONS uttered his incautious acceptance speech (when he was elected Leader in 2019) will perhaps not immediately discern the desperate disingenuousness of his remarks.

It is my privilege and pleasure to annotate Councillor SIDDONS’ remarks (double indented, and in green type) with my own personal perceptions, drawn from close observation.

The Motion makes no specific accusations against Councillor SIDDONS, so his remarks appear to address only his own fears and perceived inadequacies.

“I do not understand these Councillors’ actions based on their perception that they are not involved in decision sharing. Council were offered a different way of Governance and it was rejected. We increased the role of Scrutiny by setting up a second Committee to look at decisions made by Council.

This “different way of Governance” was the much-vaunted departure from the Strong Leader model and a return to the more democratic Committees system, which the oh-so-hard-done-by Cllr. SIDDONS intimated would come into effect in September 2019. It never has. The reality is that, far from spreading decision-making more evenly throughout the 46 members, the Leader has exercised an unprecedented series of Leader’s Executive Decisions, cutting a more autocratic figure than any other Leader this century.

“What I find appalling is that amid a crisis nationally and globally and with families and residents every day concerned about their health, perhaps mourning the loss of loved ones, worrying about their ability to put food on the table, the economic instability and the education of their families, we see Councillors indulging in game playing and naked attempts at a power grab. Was there really a need to try and cause a political crisis at this time.

Reading this preposterous passage, what flew into my mind was the image of a moustachioed Italian gypsy violinist, circling the Leader in super-kitsch aura of saccharined sentimentality. How dare he invoke the dead and the dying to save his sorry ass? The reality is that these dire circumstances demand, more than ever, strong Leadership. The reality is that Cllr SIDDONS has skipped too many meetings and withheld sight of documents until the last moment, so that no proper scrutiny could take place and he could thus avoid penetrating questions. This is the style of a diffident bumbler resorting to slight of hand.

“This Coalition Council is making real progress: affordable homes for rent, securing inward, private investment to ensure long term security for residents, and the production of a blueprint for the Borough. In spite of the challenges caused by Covid, we are moving ahead with plans for the future and tackling real issues, not perceived ones.

The “blue print for the Borough” is just that – a blueprint; not an outcome. “Moving ahead with plans” is not providing homes for the homeless – like the army veteran who was reduced to living in a tent on a roundabout. The “real issues” may not be perceived by Cllr SIDDONS. One of the most serious “real issues” is the matter of the elected member who has been using violence and threats of violence with impunity for years. Yet Cllr SIDDONS adheres to the absurd pretence that reports and evidence of such conduct are works of fiction.

“We recently undertook a massive public consultation in this Borough. The people spoke and we listened and acted accordingly. Nowhere did the residents say, waste time, money and effort on game playing.

“This Motion is founded on resentment and naked ambition, and history – both latter day and modern, shows us that it produces Leaders who are neither stable nor motivated by the public good.

Contrary to Cllr SIDDONS’ wild allegation – and having conferred with the signatories of the Motion – I can confirm that not one of them hold the slightest ambition to be Leader. They are all comfortable with the CEO inviting Nominations and allowing the Council a free vote – a so-called “beauty contest”; let the Councillors choose their Leader, on merit and without regard to political persuasion. Such resentment as prevails is entirely based on Cllr SIDDONS’ delusional belief that he is doing a good job, when, in fact, his tenure as Leader has been punctuated by postponed meetings, inadequate provision of reports, negligible openness and transparency, unsuccessful investigations into serious wrongdoing and a plethora of other woeful failings. This Motion is directed at Cllr SIDDONS’ shortcomings and nothing else.

“I call on all Councillors to let this Administration get on with the job that we were elected to do – ridding us of this ‘Low pay capital of the UK’ nametag, creating a better, cleaner Borough with improved life chances for all. The Borough residents deserve a cohesive council, with Councillors in touch with reality, pulling together to build that Better Borough.”

Cllr SIDDONS is clearly incapable of anything approaching forward thinking; he resorts time and again to snide pokes at the previous administration – the past. Going forward, the Borough (which, in Cllr SIDDONS’ mind, means the town of Scarborough – and not even all of that) does indeed “deserve a cohesive council” – not an administration limping along on the back of his ‘Coalition’ allies, the Independent Group, which is falling apart and reduced to seven members, following the departure of three who could no longer support the SIDDONS mirage of ‘jam tomorrow’ and refused any longer to tolerate coercion, bullying and threats. He is now reduced to begging and currying favour with anyone who will accept a seat on the gravy train in exchange for their support.

Councillor SIDDONS cannot be unaware that he has had a fair crack at the job and it is simply too big for him. The number of plates exceeds his ability to spin. Or perhaps he is just drowning in denial. The reality is that virtually everyone I know who takes a serious interest in Council affairs is praying for the day when he clears his desk – and clears off.

If he gave a tinker’s cuss for the wellbeing of the Borough, the good standing of the Council and the parlous state of the public purse, he would resign at once and spare the expense and embarrasment of an Extraordinary Meeting.