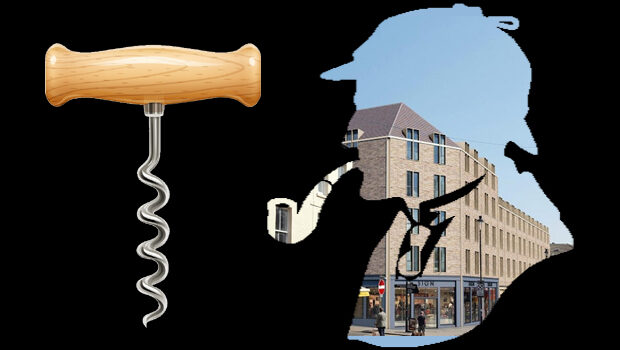 Guest Author Alderman Norman Murphy turns an eagle eye on the continuing saga of the ‘regeneration’ of the former ARGOS building.

While out taking my constitutional the other day, I bumped into an old school friend and, as is so often the case with me, our conversation quickly turned to Council affairs and he was quick to voice his opinion that the current leadership was making a total cock-up of running the Borough.

My old school pal was particularly critical of Labour leader Siddons and of course the way in which the cabal of Senior Officers surrounding him protect him from legitimate criticism and public derision. His exact thoughts on the current leadership were, and I thought I would share this with you, that Siddons and his mates were so crooked that they could hide behind cork screws. I, of course, could not comment, but, as always, please feel free to add your thoughts.

With regard to my own thoughts on the performance of the current leadership, and in particular leader Siddons, my pal’s comments set me to thinking about the ARGOS (scam) scheme and why, when this project which has been so thoroughly discredited, is hugely unpopular and, indeed, many thought was now dead, is still, apparently, being pushed forward by leader Siddons (a new planning application is, it is rumoured, about to be submitted).

To me, a very unpopular leader pushing forward the £22 million pound ARGOS (scam) scheme, a totally hated and discredited project, seems, politically and personally, to make no sense whatsoever. However, leader Siddons’ enthusiasm for the ARGOS (scam) scheme suddenly made some sense when I had a think about the timing, or should I perhaps say, the lack of time now available to leader Siddons, to get this hated project over the line.

As will be recalled, the ARGOS (scam) scheme is a project that will be funded by the Council borrowing £22 million which will be repaid by the ratepayers of the Borough over 40 years (there is no financial risk to the developers). The whole ARGOS (scam) scheme, is of course, a very luxurious gravy train and, no doubt, had things gone to the original plan leader Siddons and the Senior Officers of the Council, would by now be sat up front in the first class carriages sipping champagne and heading for a very happy, ratepayer funded, retirement.

However, events dear boy events, have cropped up to scupper the early departure of the gravy train and for the past two years, much, no doubt, to the frustration of Siddons and our Officers, it has been stuck in the station. Delayed by Covid restrictions, resident revulsion and pesky planning objections, to mention but a few of the hold-ups that the ARGOS (scam) scheme has encountered.

Now under normal circumstances, although a delay in getting their greedy mitts on ratepayers’ cash would be inconvenient, in the long run the leadership must have thought that eventually they would be able to steam-roller public opinion and ridicule and rubbish any objections, as they usually do, and then get the ARGOS (scam) scheme accepted.

Full Council would agree the deal, and, more importantly would sanction the borrowing of £22 million, which in turn would allow the gravy train to leave the station and take Siddons and the Officers to a very comfortable retirement heaven.

Normal procedure, you might think, but not, perhaps, this time. As will be noted, the current Council only has until next April to run. The devolution bill has been enacted and Scarborough Borough Council will be no more in less than a year; subsumed into the new Unitary Authority – probably North Yorkshire County Council. So if the ARGOS (scam) scheme is to be successfully pulled off by cork-screw Siddons and his Officer buddies, they realistically only have a few months left in power to get the deal done.

Therefore, what matters now to our glorious leader and his Officers is getting the ARGOS gravy train moving again, as quickly as possible, and of course, as the current authority is going to be scrapped anyway, nothing else needs to be considered.

With devolution imminent there, is now no need to worry about political considerations or keeping top jobs in the current Council structures; they will all be gone. The only consideration worth pursuing is getting the ARGOS (scam) scheme over the line before their powers are taken away.

Siddons already knows that, politically, he would be more likely to get arrested than elected if he stood again in South Cliff, and I suspect the same could be said about the rest of his motley Labour crew. So there are no electoral consequences to worry about, Labour under Siddons’ leadership, has become a dirty word in Scarborough and they will be lucky to hold on to their die-hard constituencies next May; if they can even find any candidates.

Within the Council chamber, Siddons also has problems; his administration has already suffered two votes of no confidence and it is rumoured that there is a third in the offing. Unless he can get the ARGOS (scam) scheme ratified quickly, his and his Officer buddies’ plans might not even make it to next month never mind next year.

The Senior Officers of the Council are in a similar position. They know that no other authority would employ such useless operatives, and most are just about coming up for retirement anyway, so they have no problem upsetting anyone as long as they get the ARGOS deal done. Most of our Officers could not give a flying flock about the public they are supposed to serve anyway, so now that devolution is a reality, who, they might reasonably consider, gives a toss about what residents think?

So can devolution – or glorious leader Siddons being thrown out of the Ivory Tower – save the Borough’s ratepayers from the cork-screws and their plans to lumber residents with a £22 million pound debt?

Well, maybe; but I wouldn’t hold your breath. It must be remembered that all the Senior Officers, and of course Siddons himself, know they are drinking in the ‘Last Chance Saloon’ and their desperation to get the ARGOS (scam) scheme over the line is now being driven by the knowledge that they only have a very limited amount of time remaining to pull the scam off.

Added to the shrinking time factor, it should also be noted that the ARGOS (scam) scheme will almost certainly be their last big opportunity to make some substantial Wonga out of the ratepayers, so the impetus of greed will also be driving their efforts.

Plus, of course, there is every chance that unless they get a move on, the Siddons so-called, leadership might soon be over. Siddons knows that there is a growing realisation amongst the elected membership that he is not really the “Leader” of the Council but is just the Officers’ puppet. A puppet who’s “powers of reward”, which have, so far at least, kept him in power, will very shortly, because of devolution or being booted out of power, be gone.

Consequently, as mentioned, this realisation of just how weak Siddons is amongst the elected membership may well trigger yet another leadership challenge; which Siddons would almost certainly lose, and the ARGOS (scam) scheme would no doubt go down with him.

So, even though the odds are stacked against them, as there is still £22 million to play for, and time and tide wait for no man, it is my guess that cork-screw Siddons and his Officer buddies will keep pushing to get the ARGOS (scam) scheme over the line as long as they have breath in their bodies.

Villas in Tuscany do not buy themselves, you know; the money to buy them has to come from somewhere – and it looks like it might still be coming from the Borough’s ratepayers: pass the cork-screw.