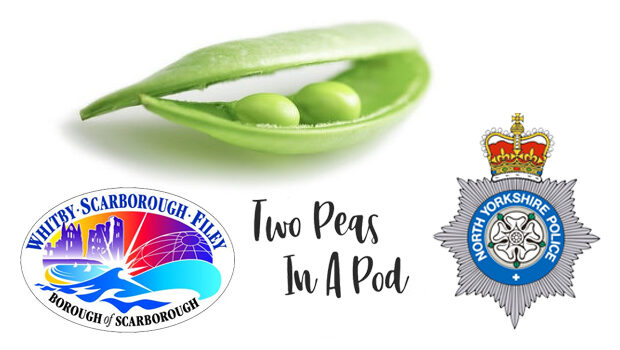 Today’s Guest Author, Alderman Norman Murphy, draws some interesting comparisons between North Yorkshire Police and Scarborough Borough Council in regard to the “Openness and Transparency” of their respective interactions with the media.

As many of you have commented, the appalling behaviour of some Senior Officers at North Yorkshire Police (NYP) highlighted in the two excellent NYE articles written respectively by Tim Hicks and Nigel Ward, is, I would totally agree, both disgraceful and very worrying.

The fact that Senior Officers, in an organisation which is funded by the public, which has the objective of serving and protecting the public, should seek to deny any form of public scrutiny, either through the media or public enquiry, is, as huge number of you have pointed out, completely unacceptable and morally wrong.

However, the secretive and sneering behaviour of NYP, displayed by its Senior Officers when perfectly legitimate questions are asked by the media or members of the public, pales into insignificance when compared to the Stalinist attitude displayed by the leader of Scarborough Borough Council (SBC) Labour’s Steve Siddons, and his clique of Senior Council Officers.

Should the media, or those who pay their exorbitant wages, have the temerity to ask Siddons and his SBC henchmen and women questions on issues such as, funding, allocation of resources and general questions of competency, they are usually presented with a Mafia-style wall of silence.

The level of contempt shown towards anyone who dares to question the decisions made by the current Labour leadership displays a culture in the Clown Hall which demonstrates, to me at least, an administration that has a pathological hatred for the public it claims to serve.

The media, the ratepayers and even the voters, are it seems, despised by Siddons and his cronies and when their views and concerns are expressed to the leadership they are either ignored or ridiculed.

Siddons treats criticism like it is something nasty he has stepped in on the pavement; inconvenient, but easily washed off. The public are little people, and their views inconsequential, they can be brushed aside crushed by the Clown Hall “Red Guards” trampled under the jack boots of officers ruling from the comfort of the Ivory Tower.

And yet this sorry state of affairs was not what was promised by Siddons and his cronies only a couple of short years ago. As a considerable number of readers have commented, when the hated Conservative administration (which had ruled the Borough of Scarborough for over 20 years) was finally booted out of power in May 2019, many residents and ratepayers gave out a collective sigh of relief.

Most voters, regardless of their individual political persuasions, were sick and tired of being treated like idiots by those who they had voted into power and thus were willing to give the new administration, however it was constituted, a chance. Many residents reasoned that whoever took over the Ivory Tower they could hardly be any worse than the last lot.

And so it came to pass that against all the odds Labour’s Steve Siddons, leader of the 13-weak Labour group, became ruler of the 46-strong Scarborough Borough Council.

Now initially, although many were concerned that giving Steve and his loony left pals the keys to the coffers of the Borough might not be such a good idea, doubters were, to some extent, reassured that all might yet be well as the propaganda Siddons and his merry band had put out before the election indicated that they understood voters’ concerns and were willing, indeed eager, to right Tory wrongs.

Sceptics and devotees alike thought that Siddons would surely not renege on his manifesto promises, well that’s how the theory went.

Siddons’ election literature was littered with reassuring rhetoric condemning the actions of the previous Conservative administration, as were his members verbal comments, Siddons vowed that his group would never commit Tory sins or back anyone who even thought of imitating Conservative miss-rule.

The new administration would be “Open and Transparent”. The “Vexatious List”, which had been brought in by the nasty Tory Leadership, barring those ‘deemed’ to be troublemakers from contacting elected members and Senior Officers, would be scrapped immediately.

There would also be no backing for any more unsecured loans. The unsecured loan of £9 million given to Benchmark came in for particular censure, as did the £14 million which Richard (the Bin Man) Bradley had recommended that the Council should borrow to buy the clapped out St Nicholas Hotel.

Consultants and developers were the “Devils Work” and they would be treated with distain and suspicion. To reinforce this conviction, Siddons made his views on the Benchmark development, and how he would give the developers notice that they should either put up or shut up, in his opening speech as leader of the Council.

Furthermore, the Council’s assets, the Futurist site and choice pieces of Council-owned land (for example), would not be given away to the likes of Flamingoland. Valuable assets and possible development sites would be put out to tender: “Let’s see what there is out there” was the order of the day.

Now, of course, two years down the line, you don’t need me to tell you that none of what was promised by Siddons before the election has come to pass.

The “Vexatious List” is still in force, indeed it has been enforced even more rigorously under Siddons’ rule. “Openness and Transparency” is a joke, and apparently, I am reliably informed, Siddons considers that even more Council secrets should be kept from residents.

Our ‘champagne socialist’ leader was, so I am told, furious that the £300,000 cost of buying and installing his terrorist proof planters got leaked via the NYE.

Siddons’ fury at his secretive plans being leaked is of course well known. It will be recalled that when details of the ARGOS development scheme were leaked, he went berserk. He was so incensed that he instructed his Head of Legal Services to bring in the Police, claiming that when the culprit was caught, he (or she) would face life imprisonment.

Fat chance of that happening, of course. NYP were not remotely interested in investigating a leak from a tin pot Council and the culprit, unsurprisingly, is still at large.

This furious reaction by Siddons in the case of the ARGOS development is, of course, not difficult to understand. As already mentioned, one of Siddons’ pre-election promises to the electorate was that there would be no more unsecured loans to developers.

Yet once the ARGOS report was leaked, it clearly revealed that Siddons was taking the advice of Richard (the Bin Man) Bradley who was recommending that the Council should borrow £22 million to build Coventry University a block of flats. I know; you could not make it up.

Then, of course, there was Siddons’ promise NOT to sell off Council assets to developers. This promise was, as I understand it, always going to be broken. Apparently Siddons was in talks with Flamingoland over developing the Futurist site even before the election.

Siddons’ enthusiasm for the Flamingoland offer was already well known and, even though he tried to keep it a secret, he agreed with the Tories that the Futurist should be pulled down, and only changed his mind, and ordered that his members should vote against demolition, when he realised that opposing knocking down the Futurist would be electorally popular.

Not that the giving away the Futurist site has that much significance when compared to his proposal to virtually give away huge areas of Borough land for, so he claims, “affordable housing”.

So we may see that the pre-election promises Siddons made are not worth the paper they were written on.

For me, and I know from your correspondence with myself and other contributors to the NYE, that many of you feel the same. As most right-minded people see it, if a political administration is to succeed then an honest and inclusive relationship between the governed and its governors has to be established.

In this regard, I would contend that the current Labour administration, under its present leader, Steve Siddons, has failed miserably the test of leadership.

The stench of corruption, many of you already consider, fills the Clown Halls corridors of power and, it is my guess that, when the wind of change starts to blow (as it surely will when the devolution elections are held next May – or possibly sooner if a by-election crops up), our Italian-loving leader and his loony left pals will soon find themselves out of a job.

The loonies will, no-doubt, crawl back under the rocks from whence they emerged in 2019 and Siddons will, no-doubt, hope that after all the planters he has bought and paid for, there is still enough ITALIAN marble left in TUSCANY to complete a building project, or two. Mustn’t forget the Officers.