Following on from Part 1 of this article (here) , regular NYE contributors Tim Hicks and Chris Clark investigate another of the UK’s great murder mysteries; the brutal murder of Mrs Ann Heron in August 1990, which is Durham Constabulary’s only unsolved murder. Their analysis has linked it to the June 1980 murder of Mrs Trevaline Evans in North Wales.

Many readers will be aware that the NYE has been investigating serial killer Christopher Halliwell, who was convicted of the murders of Becky Godden-Edwards, aged 20 in 2003, and Sian O’Callaghan, aged 22 in 2011, at Swindon, Wiltshire.

In Part 1 of this article, the authors described how Chris analysed new witness information developed by our colleagues from the Mirror that Halliwell had worked in North Wales, to connect him to the disappearance of Mrs Trevaline Evans in North Wales in June 1990.

Part 1 of the article covering the murder of Mrs Evans can be read here.

The Murder of Mrs Anne Heron

In their article Halliwell the River Tees Murders, the authors put forward the theory that Halliwell should be considered as a suspect in the murder of Mrs Ann Heron aged forty-four in Durham on Friday the 3rd of August 1990.

The Crimewatch UK program broadcast in October 1990 covered Mrs Heron’s murder at the beginning of the programme. It also covered Mrs Evans’ disappearance (at 10 minutes) and can be seen here. Please take the time to watch it before reading further.

Mrs Heron had been sunbathing in a bikini the front of her home – an isolated property situated just outside Darlington called Aeolian House – in a place that was visible from the A67.

Mrs Heron’s body was found by her husband Peter at about 6.00 p.m.in a pool of blood in the lounge. She was found naked from the waist down. Her bikini bottom was never found. The autopsy established that her throat had been cut with a weapon like a Stanley knife or a cut throat razor. There was no sign of forced entry. The front door was open, the house had not been ransacked and nothing had been stolen. The post mortem established that the time of death was at about 5.00 p.m.

A blue Vauxhall Astra was seen parked at Aeolian House and a ‘sun-tanned’ man in his early thirties was seen leaving Aeolian House in a blue four-door car.

The authors believe that Christopher Halliwell should be considered as a suspect in this murder because:

NB: the facial similarity between the victims and Mrs Heron shown in the lead illustration

The connections between the murders of Mrs Evans and Mrs Heron

Mrs Evans disappeared on the 16th of June 1990; Mrs Heron was murdered less than two months later on the 3rd of August 1990. In both cases a light blue four-door vehicle was seen and featured prominently in the enquiry.

The image below is from the Crimewatch UK reconstruction of the murder of Mrs Evans showing the vehicle and Man 4 – who resembled Halliwell – outside the antique shop. 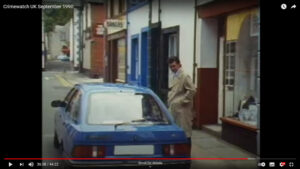 The image below is from the Crimewatch UK reconstruction of the murder of Ms Heron, showing some makes of car the police believe cold be the one seen speeding away from Mrs Heron’s murder. 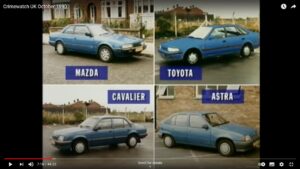 If Mrs Evans’ killer did use the car featured in the Crimewatch UK reconstruction, he would not have known that his vehicle had been seen and described to the police until the September 1990 broadcast of Crimewatch UK covering the murder of Mrs Evans. So he had no need to discard it until then, i.e. after the murder of Mrs Heron. In summary, the connections between Halliwell and the two murders are:

There has been a suggestion that the violent armed robber Michael Albert Benson (deceased) may have murdered Mrs Heron. Northern Echo article here. Crimewatch UK coverage of Benson from December 1990 here at 10 minutes.

The authors have analysed this theory carefully. They entirely agree that Mr Peter Heron had nothing to do with his wife’s murder, they have ruled Benson out as a suspect. Their reasoning is as follows: 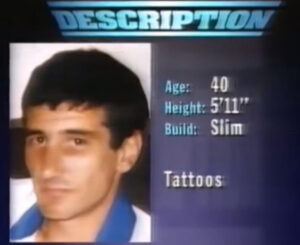 Did you know of Christopher Halliwell’s father, a man called Alan Keith Halliwell who might have lived in Huddersfield, York, Ampleforth or Oswaldkirk, who previously served in the RAF?

If you prefer to talk to a journalist anonymously, then please email letters@nyenquirer.uk. All enquiries will be treated in the strictest confidence.

Durham Police was provided with a draft of this article and asked for a comment, but did not provide one by the time of publication.

The NYE is the only media organisation that has conducted an in depth ongoing investigation into Halliwell. Links to our articles are below. They constitute the most up to date and continually updated source of information on Halliwell available to the public.