The NYE is the only media organisation that has conducted an in depth ongoing investigation into serial killer Christopher Halliwell, who was made famous by the TV series “A Confession”.

Unfortunately, due to covering events in Minneapolis and the impact in the UK, the Coronavirus pandemic and the Police, Fire & Crime Commissioner Elections, these articles had to be put on hold.

Tim and Chris are now returning to their joint forte of cold case investigations. In this article they cover positive new developments in the three River Tees murders.

In October 2018, the authors covered the murders of Donna Keogh (1998), Vicky Glass (2001) and Rachel Wilson (2002). In this article The River Tees murders 1998 to 2002, in which we considered the possibility that serial killer Christopher Halliwell was operating in Middlesbrough across the North Yorkshire Border.

The bare facts of the three cases are as follows:

Donna Keogh was 17 when she disappeared during the early hours of 19 April 1998 from Hartington Road, near the Shipmate pub, in Middlesbrough town centre. She was last seen around 3am being forced into a red hatch back car which headed off up Newport Road which leads to Newport Bridge and the Tees Barrage Bridge. Her body has never been found and the police believe she has been murdered.

Donna Keogh’s parents made a formal complaint about the investigation by Cleveland Police, complaining amongst other things that police officers issued press statements alleging their daughter was a prostitute although this was not so. Cleveland Police apologised for the way the case was handled.

In June 2018, Cleveland Police conducted a search for Donna Keogh’s body in wasteland in Middlesbrough, which was unsuccessful.

Cleveland Police appeal for assistance can be seen here. If you have any information regarding Donna please call Cleveland Police on 101 or call its advice line on 01642 302527.

Crimestoppers is offering a reward of up to £10,000 for information on Donna’s murder.

Vicky Glass was a 21-year-old prostitute who was dropped off by taxi outside the Shipmate pub, in Union Street, Middlesbrough, at about 4am on Sunday September the 24th 2001. Her naked and decomposing body was discovered in November 2001 forty miles away on an isolated track on the North York Moors, near Danby, North Yorkshire. Her clothes and possessions have never been found.

After Vicky’s body was discovered police launched a massive manhunt appealing for friends and clients to come forward with any information they may have to what happened to the fair-haired young woman, who was a frequent visitor to Middlesbrough town centre. When she was last seen she wearing a white T-shirt, light grey trousers and white trainers. She was 5ft 3in, and spoke with a local accent.

A lorry driver was arrested and later released without charge in 2001. In 2002, a man from North Yorkshire was arrested and questioned at Northallerton Police Station, but he was also released without charge. According to press reports, police investigated serial killer Stephen Griffiths in connection with her murder but were able to eliminate him from their enquiries.

Rachel Wilson, 19, was last seen on CCTV at 07:02 on the 31st of May 2002 in the Woodlands Road area of Middlesbrough town centre, only a half mile from where Vicky Glass was abducted just 16 months previously.

Her naked remains were only discovered in woodland in a shallow grave near Newham Hall Farm Estate in Coulby Newham on the 27th of June 2011 – an unusually remote location. A Post Mortem examination failed to find the cause of death owing to the fact that the remains had lain there for a decade before being discovered.

The Rachel Wilson investigation resulted in the arrest of a man in 2003 who was released without charge. A man was arrested and released on police bail in 2014. Teesside news report here. In 2015, Chief Constable Ian Spittal of Cleveland Police apologised to Rachel Wilson’s parents over its handling of the investigation.

As a result a cold case investigation was opened into all three murders and the HIU focussed solely on these three cases.

“There is commonality between the cases through the sex and ages of the victims and all being linked geographically to Middlesbrough. It is too early in the re-investigations to say if there are any other links.”

This Teesside Live report raises the issue that all three murders were committed by the same man here. The authors also concluded in the 2018 article that Christopher Halliwell should be considered as a suspect in all three cases.

Rachel Wilson’s partner Keith Hall, aged 62, of Middlesbrough, who had dragged Rachel into a life of prostitution and domestic abuse has admitted killing her. He initially pleaded not guilty to murder, but changed his plea to guilty of manslaughter on the basis that he had beaten Rachel so badly that it had killed her, although that was not his intention. BBC report here.

Commenting on this development, Chris said:

“I remain satisfied that my original deductions were valid and that her murder and the murder of Donna Keogh and Vicky Glass are all consistent with Christopher Halliwell’s modus operandi. He was a viable suspect in this terrible crime and it was right to recommend considering him as a suspect.

Cleveland Police have done a good job and secured the conviction. They never gave up and maintained the momentum of the investigation for twenty years. I accept that Halliwell is not responsible for Rachel’s murder.”

“I am glad that we covered the case. Our coverage included appeals for information and as a journalist I believe that any coverage that keeps cold cases in the public eye is helpful, because it can encourage witnesses to come forward.

Like Chris, I will keep on covering the murders of Donna and Vicky”

Both authors believe Halliwell is a viable suspect for the murders of Donna Keogh and Vicky Glass because:

Our first NYE Appeal for Information provided information that Halliwell was in the Scarborough area in 1998 – 2002. Scarborough could therefore be significant to the murders of Donna Keogh and Vicky Glass. It is sixty-two miles from Middlesbrough; about one hour and thirty minutes driving time along the A171. The route passes Scaling Dam and close to the deposition site of Vicky Glass’s body at Danby.

You can submit information on the murders of Donna Keogh and Vicky glass to Cleveland Police, using the website www.finddonna.co.uk.

They frequented a sandwich bar called “The Pop In”. Fred West may have done building work there. One of their victims was Anne McFall (aged 18), pregnant with Fred West’s child, who worked at the café. She disappeared in July 1967. Mary Bastholm, aged fifteen, who also worked there, went missing on the 6th of January 1968. She was last seen waiting for a bus to visit her boyfriend. The Wests modus operandi was to pick up girls at bus stops by offering lifts to them. There has been local speculation for years that Mary had been killed by Fred and Rosemarie West and her body concealed.

Sir Trevor McDonald had previously fronted a documentary called Fred and Rose West: The Real Story. Journalists were working on a follow-up documentary he was to narrate investigating the other murders they may have committed but were never charged with. They used a cadaver dog and ground penetrating radar to search for a body buried within “The Pop In” which is now known as “The Clean Plate Café” in Gloucester. Their search indicated the existence of a body and they immediately notified Gloucestershire Constabulary, which released two statements on the 11th of May 2021:

Police activity will be taking place at a location in Gloucester for a number of weeks following a recent discovery.

On Friday 7 May officers were called to a café in Southgate Street by a production company filming a documentary.

They reported how they had found possible evidence to suggest a body could be buried within the property.

Detectives attended and the Major Crime Investigation Team has deemed that further assessments are required in order to determine whether an excavation is necessary.

In the past, people have linked the building to the disappearance of Mary Bastholm.

Mary was 15-years-old when she was reported missing on 6 January 1968 and she has never been found.

Mary’s disappearance had also previously been linked to serial killer Fred West and there was suspicion he was involved in her death.

Family Liaison Officers have now been put in place to provide support and updates to Mary’s family as enquiries continue.

Investigating officers expect to be at the location, which is at The Clean Plate café, for a number of weeks.

“This could be a significant development on a case which has gained a lot of public interest over the years.

On the basis of the information provided to us, we consider this to be new and potentially important evidence in the case of Mary Bastholm, however further detailed assessments will take place over the following few days to determine the extent of excavation needed.

First and foremost our thoughts are with Mary’s family and we would ask that their privacy is respected at this difficult time. This news may understandably alarm those who work near to the premises, as well as those in the wider Gloucester community and beyond.

The Constabulary has always said any fresh evidence would be reviewed. This has happened and a focussed and proportionate investigation will now take place. Due to the potential scale of this there will likely be some disruption to those who work nearby, and I ask for their patience and co-operation during this time.”

“Anyone who has any new information relating to the disappearance of Mary Bastholm can report this to Gloucestershire Constabulary online by completing the following form and referencing incident 99 of 11 May: http://tracking.vuelio.co.uk/tracking/click?d=rh2YrPKxzu89B6zg9Ow2iWQYO_Wf8YTGtasAZqW2d3rkwCy2Pftx5m0wLulj4yKviQwyyFEnK9AweStbshDYw-gFHVm-S-jXBDxiHHcAnzlS8SZYvDf_aB5LEYbyDwXYBP7aDRWADDmX-2dzbAczBtrHsYyb6uvmjjk7RvnfH1Wa87O4AJ_LbBoWBvHD62b0YS5yuiJzugQRYwUWCFurny0vnPx8TuN5f8B-D1qJBir40

The Force still has documentation and information from the original enquiry into Fred West and therefore anyone who submitted information previously does not need to do this again.”

“The family of Mary Bastholm has issued a statement as investigation work continues at the Clean Plate Cafe in Gloucester today.

The Constabulary is stressing that the current work relates to assessments of the site, which are likely to take a number of days, and that excavation work has not begun.

Officers say that they could be at the site for a number of weeks.

Mary’s family said: We are aware of the ongoing developments around Mary’s disappearance and are being kept up to date and supported by Gloucestershire Police Family Liaison Officers, at this time please may we ask for privacy so we can grieve for Mary and direct any media queries to Gloucestershire Police’s Press Office.”

Mary was 15 years old when she was reported missing on 6 January 1968 and she has never been found.

Mary’s disappearance had previously been linked to serial killer Fred West and there was suspicion he was involved in her death.” 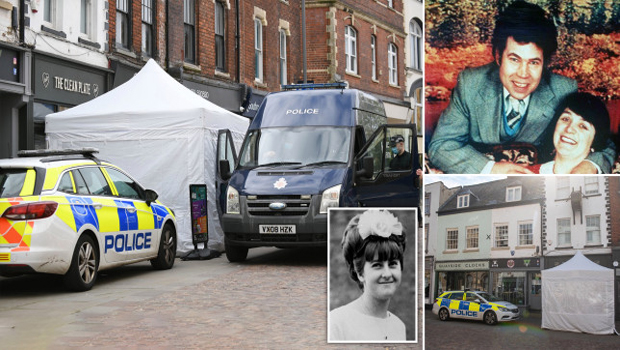 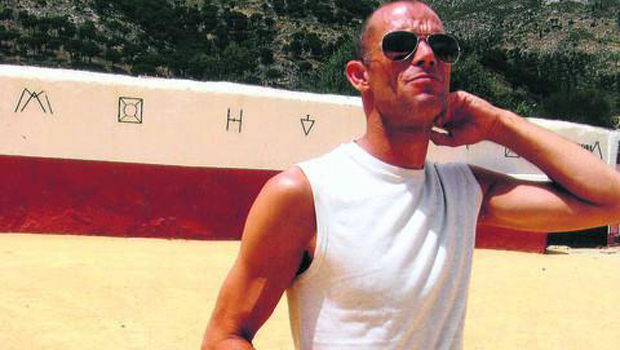 Halliwell’s picture is shown above.

Any information would considerably assist our knowledge of Halliwell’s movements. So please can you contact the NYE using our e mail address: news@nyenquirer.uk if you think you can help.

The NYE is the only media organisation that has conducted an in-depth ongoing investigation into Halliwell. Links to our articles are below. They constitute the most up-to-date and continually updated source of information on Halliwell available to the public.