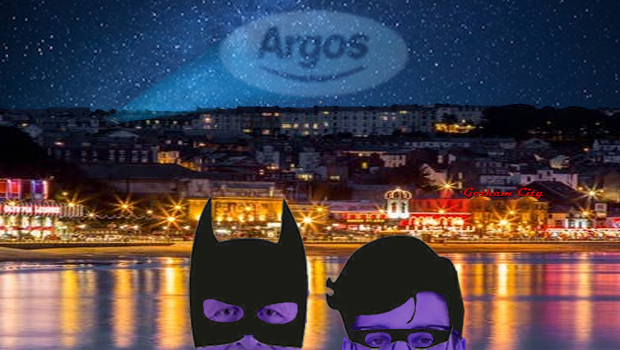 I suppose, like most people, I was greatly relieved to see that the Council’s proposed £22 million re-development of the old ARGOS building is to be the subject of not one but two call-ins by concerned Councillors. Hopefully the call-ins will allow elected members to conduct a thorough and in-depth review of this very contentious and costly project.

What, in the fullness of time, the call-ins will reveal is, of course, unknown. However, after reading through some of the highly critical, but perfectly pertinent, comments made by various people recently concerning this project, it seems an opportune moment to review what we do know about this fantastical Council scheme.

The basic premise of the ARGOS project, which is that the Council will borrow £22 million, which it will then loan to a private developer who will then build a block of flats is, in itself, I think most rational people would agree, about as fantastical as it gets.

A fantastical premise – which becomes even more fantastical when one looks at who the flats are being built to accommodate. The proposed development of 200+ flats in the old town of Scarborough, are not being built to provide what would be very lucrative tourist accommodation. Nor are the flats being built so the individual units could be sold off generating a substantial return on the initial investment for the Council.

No. Most of these flats are being built to provide accommodation for students studying at the Scarborough campus of Coventry University. While other units are being made available to the NHS to house trainee doctors and student nurses.

Stop laughing. This is serious.

Fantastical as it may seem, the developers have convinced Council Officers that students, whose University is miles away, will be happy to live in the old town. Even more fantastically, not only have they managed to convince Council Officers that students from the University will be prepared to pay out good money to live in one of the most deprived areas of the Borough, they have also persuaded them that trainee doctors and student nurses will also be willing to live in that area.

This idea is, of course, delusional to say the least, as it must be asked why would doctors, nurses and university students want to live miles away from their place of work or study?

So we may conclude that the chances of this project being successful are about as likely as a snowball surviving in Hell. So who, we might ask, is going to gain from pursuing such an obviously flawed concept?

To answer this question, it seems obvious that we must examine what we know about how this project is to be financed: follow the money.

There are six main players involved in this scheme.

(1) Wrenbridge, the consultants who brought the various bodies together.

(2) Coventry University, the principle user of the flats.

(3) The York NHS Trust, who will also take some of the flats.

(4) Buccleuch Property (Scarborough) Ltd (the Developer) who will build the flats.

(5) Future Lets, who will let and administer the flats.

(6) Then last, but by no means least, there is Scarborough Borough Council.

So what do each of the parties put into the scheme – and what will they get out?

Wrenbridge are putting NOT A PENNY into the scheme: but take out a big fat consultancy fee.

Coventry University are putting NOT A PENNY into the scheme: but get out of it prestigious looking accommodation which they can advertise to attract potential students.

The York NHS Trust are putting NOT A PENNY into the scheme: but get out of it accommodation for free which otherwise they would have had to build at their own cost.

Buccleuch Property are putting NOT A PENNY into the scheme: but get out of it the opportunity to build a block of flats, at a cost they dictate, and when the build is finished they will, no doubt, take a handsome profit.

Future Lets are putting NOT A PENNY into the scheme: but will get the rents from 200+ flats and no doubt the administration and running costs will be, miraculously, just about covered by whatever they receive in rents.

Scarborough Borough Council (actually us – the ratepayers) are putting into the scheme £22 MILLION POUNDS: and what will the ratepayers get from the scheme; a pig ugly building, 40 years of debt and the promise of jam tomorrow.

Taken collectively, it seems to me that we can be confident that this is another Council project where we, the ratepayers, take all the financial risk and everybody else involved in the scheme makes a huge profit for no risk whatsoever.

Heads they win, tails we lose. Well, this is how I read the situation in regard to how the ARGOS project sits at the present moment. As I see it, no rational Council would ever think that loaning £22 million pounds of ratepayers money to fund such a hair brained project would be a good idea.

However, despite the obvious insanity of borrowing £22 million to fund the very dodgy ARGOS project, it is certain that had it not been for the two call-ins, the current leadership would be preparing at this very moment to give the developers our money.

So, it must be asked, if the ARGOS scheme is so obviously flawed, why is the present leadership of the Council so supportive of the scheme? Can the reason for the present administrations enthusiasm for the project be put down to the usual failings of greed, stupidity and the desire for short term political gain?  Or are there more sinister motives lurking behind the façade of a Council leadership pretending to be acting in the best interests of those it supposedly serves?

Well, I don’t know about you, but when all the evidence we have so far been given with regard to the ARGOS project is examined objectively, it reminds me of a plot line from a TV programme I used to enjoy called HUSTLE.

The basic premise of each episode of HUSTLE was that a group of very clever con artists would use their talents to swindle a usually very stupid and greedy individual, possibly even a Council leader, out of a large sum of money. To achieve their ends, the HUSTLE gang would dream up some very implausible scheme, fantastical it might be called, which they would introduce to their victim as a very sound and absolutely safe investment.

The MARK, as they referred to their victim, would then do all they could to find out if the “too good to be true” deal they were being offered was in fact just a con. However, the HUSTLE gang, of course, would anticipate this and have counter strategies in place to fool the stupid and greedy MARK into believing that, he/she/Council leader, were investing in a sound project that would make them loads of money for very little risk.

Implausible? Fantastical? Well, maybe… But it should be remembered that if the ARGOS project is a scam, which many would argue is what it looks like, the MARK is Scarborough Council, and this organisation, as many people have frequently pointed out, fits the stupid and greedy profile perfectly.

It will not be forgotten that this is the stupid Council who gave an unsecured £9 million loan to Benchmark to build the failing Alpamare Waterpark. This is the greedy Council who bought a clapped out hotel for £14 million which many now believe is practically worthless. And this is the Council that wasted £4.5 million demolishing the Futurist theatre.

So if ever there was an organisation which might fall for an elaborate scam, I think we could all agree that SBC is a stand out candidate.

Indeed, it is not difficult to imagine a future, should the Council agree the £22 million loan, where the block of flats is finally finished and ready for occupation. The consultants, Wrenbridge, wish SBC all the best with their new venture before scuttling away with their big fat cheque. Buccleuch Property, who have already been paid, hand over the keys and are never seen or heard of again. While completely unconcerned, as they have not forked out a penny, Future Lets eagerly set about getting ready for their first influx of students and NHS staff.

However, sadly, the expected up take of the available accommodation, because of Covid-19, never happens. A review of Future Lets Balance Sheet shows that the company had net liabilities of £357 k as at the year ended 31 July 2018. Future Lets is sorry, but with all their existing liabilities and the low take up of the accommodation the project is not viable. They will have to pull out. But, says the Council, you have guaranteed to pay us our rent for the first ten years no matter what happens. Well “yes” says Future Lets, that is true, but we can’t – so we are going bankrupt.

The flats then sit unoccupied for several years unloved and unwanted in their present configuration. Unable to let the flats to students the Council, of course, does not know what to do with the building and it becomes (like most Council owned property) derelict.

The situation looks bad for our flats but just when it looks like the only option left for the Council is to turn the building into a giant HMO, a miracle happens. One of the directors of the now bankrupt Future Lets has an idea to reconfigure the student flats into two bedroom luxury apartments and sell them. His friend, the owner of Buccleuch Property developers, re-appears and offers, very kindly, to do the conversion at cost.

All the Council has to do, therefore, to get its self out of a very sticky situation is to sell the now derelict block of flats to the new company that nice Mr Future Lets has set up. Price to be negotiated but somewhere in the region of £2 million would be very generous thinks Mr Future Lets; sign here SBC and everybody will be happy.

However, of course, this bleak scenario could never happen. Well not, I am sure, while we have the dynamic duo to safeguard our interests. With that razor sharp combination of Steve ‘BATMAN’ Siddons, ably assisted by the Boy Wonder, Mike ‘ROBIN’ Greene on watch, we can all, I am doubly sure, be confident that no team of fancy hustlers will get one over our super heroes.

All can sleep safe and secure in Gotham City tonight!