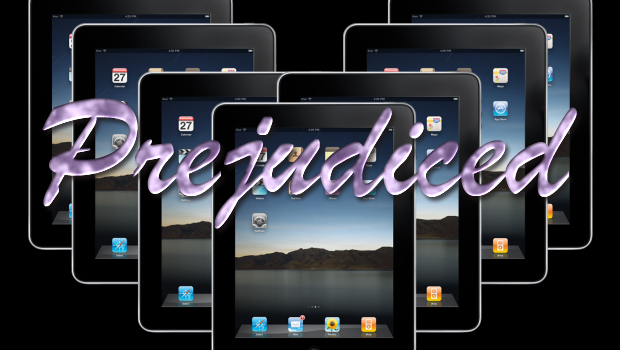 Having offered readers, in Part One of this article, an insight into the methods that SBC deploy to prevent the public from connecting, for example, the relationship between Council staff and convicted criminals, I would like to develop some ideas concerning the second P-word of the title – PREJUDICED.

The legal dictionary provides a more precise definition of the root word:

Yet the received wisdom is, in our modern democratic society, that we are “All equal under the law”; ergo, it is not acceptable that a Council – or a Police Force – should treat different people in different ways or degrees.

Were it to be widely known that Scarborough Borough Council operates a policy of selective transparency, the reputation of the Council in the public perception would stand to be seriously prejudiced. Consequently, any bias the Council may wish to apply must be applied covertly – secretly.

It is a matter of demonstrable fact that the Council – or a faction within the Council – is committed to a policy of selective transparency amounting to deliberate secrecy. It is this secrecy that facilitates the application of bias – treating different people in different ways or degrees.

Having demonstrated (in Part One) that the Council has exerted influence over the local newspaper, I can now present evidence of a wider application of the Council’s predilection for secrecy – secrecy even from the majority of its own elected Councillors.

In my article “SBC: Duty of Care” (published 16th September 2016), I touched upon the case of Whistleblower Ben MARRIOTT and his successful claim for Constructive Dismissal against the Council.

Readers may be interested to perform a simple experiment by visiting the Scarborough News website and entering the words ‘Ben Marriott’ in the search facility. My sole search return was a 2008 story entitled “Boat trashed by Scarborough harbour joyriders”. Clearly, SBC – who took pains to keep one of its solicitors out of the news – has not provided the Scarborough News with a press release regarding its defeat – read “rout” – by Ben MARRIOTT in his successful Constructive Dismissal claim.

At the request of Rob BARNETT (a Scarborough Borough Councillor [Lab.] in the Whitby ward of Streonshalh), the Enquirer has published HHJ Humphrey FORREST’s Judgment in the MARRIOTT case, here.

This information was deemed “not for public consumption” and, for the most part, “not for Councillor consumption”, either. The number of Councillors who have claimed to me (or have been reported to me to have claimed) to have been unaware of the MARRIOTT legal action until they learned of it in the Enquirer runs comfortably into a couple of rugby teams. One Councillor who was aware – Councillor John NOCK [Con.] was fobbed off with bare-faced lies. Small wonder that he now feels deeply betrayed by the leadership.

More effective than reciting a series of separate instances of the Council’s attempts to keep reputationally damaging information out of public view is the following ‘business end’ extract from an email to all Councillors sent out by Mrs Lisa DIXON, Director of Legal & Democratic Services and Monitoring Officer, on the subject of ITC-Security. 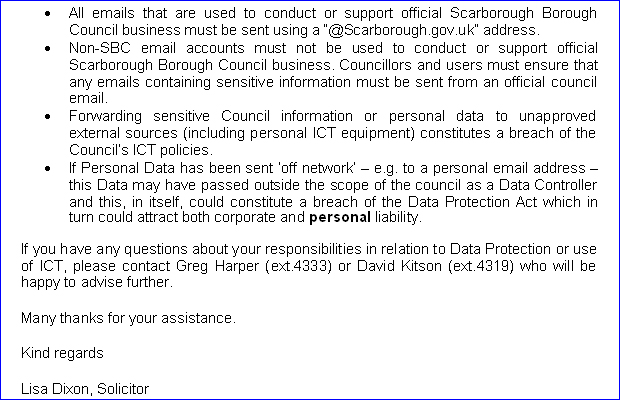 The first of those bullet-points is standard fare and has been generally observed since the Council first (belatedly) acknowledged the digital revolution.

The second gives the first hint of monitoring of Councillors email/internet usage.

But it is the third and fourth bullet-points that tell the full story.

I should explain that when the Council determined to provide all Councillors and Senior Officers with i-Pads (summer 2012), one of the most important elements informing that decision was the alarm experienced by those in control regarding the ‘leaking’ of information – and not only to the Enquirer – from Council laptops. What were they afraid of?

It was a deciding factor that the main advantage offered by the i-Pads (over the laptops formerly provided to Councillors) was the availability of a significantly more effective method of monitoring Councillors’ email traffic and web-usage, using a relatively cheap after-market App. The point being that, thenceforth, SBC ITC-Officers could easily detect if and when emails (with or without attachments) had been forwarded to third-party recipients, thus making it that much easier to ‘lean on’ Councillors for ‘leaking’ information to the Enquirer, or the Private Eye, or wherever – a kind of cyber bullying.

Former Councillor Mike WARD is a case in point; he fell foul of the Standards Committee for forwarding public interest information that had every business making its way into the public domain.

It is curious that there has been no objection by Councillors to a system designed to ensure that all their internet activity and e-correspondence is now an open book to Council Officers. Big Brother is watching them.

The salient feature of the fourth bullet-point is that thinly-veiled threat of “personal liability”. Its message is clear – thou shalt not share the Council’s secrets. Not if you know what’s good for you. That is the Second Commandment at SBC.

In this way, Councillors’ ability to be fully open and transparent with their electors is irredeemably prejudiced.

The First Commandment, by the way, is this:

Quite how this Big Brother policy is claimed to be in the public interest, or even fit for purpose, is unclear. Most Councillors know that they can share information quite easily, without leaving a digital footprint, by the simple expedient of allowing third-parties to peer over their shoulders at their wonderfully portable i-Pads.

Nor can it prevent Councillors with a genuine commitment to transparency from taking one or more digital photographs of material displayed on-screen. These can then be forwarded, untraceably, via private ITC equipment – over which the Council has no prying purview. Big Brother is out of the loop.

Readers who doubt that the Councils resents wider publication of its actions and intentions are directed to a Letter to the Editor of the North Yorks Enquirer (18th July 2014) from former Councillor Nick BROWN, who felt moved to write to the NYE setting out the reasons for his resignation. One particular paragraph is eminently worthy of repetition:

What kind of elected representatives of the public or paid public servants are they, who ridicule a colleague for the monstrous sin of engaging with the public?

There are, of course, some good Councillors in the Borough of Scarborough. Unfortunately, their best efforts on behalf of their electors are being significantly and unacceptably prejudiced by the all-pervasive secrecy ethos that fills every corner of the Town Hall.

It is on their behalf that I set the following request before the Council’s Legal Director, in an email sent at 16:34 on Thursday 22nd September 2016:

I write to request an open and transparent response to the following question:

For the avoidance of any doubt, I do not refer to your emailed apology of 16:02 on Friday 9th September 2016.

Because this request is a test of your personal integrity, I await, with keen interest, your open and transparent response – for publication into the public domain.

Mrs DIXON has confirmed receipt of my email. Should Mrs DIXON provide an open and transparent response (and my prediction is that she will not), I will ask NYE Editor Tim THORNE to post her response here, at the foot of this article.

At the time of writing (11:00am Friday 23rd September 2016), my email to Mrs DIXON has been opened 14 times now, at two different IP-locations. I wonder what is preventing her from dashing off an open and transparent one-liner?

I leave readers to look forward to the prospect of further exposés in the coming days and weeks. We will also be looking at the way in which PRIVILEGE (and its close cousins, BULLYING and MISOGYNY) undermines democracy and facilitates corruption.

All three of these phenomena are very much in evidence at Scarborough Borough Council and I shall be presenting that evidence.