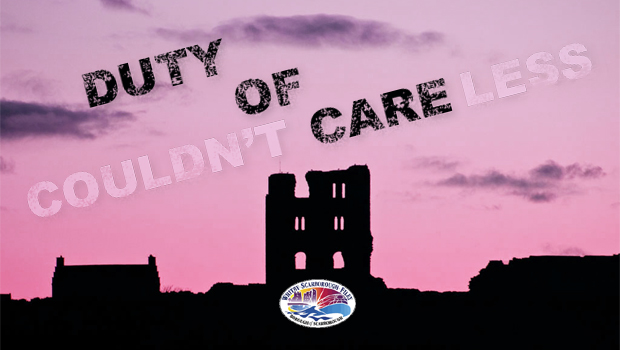 I offer you an opinion.

It is not a legal opinion; rather, it is a moral and ethical one.

Never in my years of scrutinising your Council – the body corporate – have I found myself so sought out by members seeking and sharing information and advice as in these past few months.

This is explained in part, but only in part, by the publicity accorded to the North Yorks Enquirer by the Private Eye magazine, following its report on the collapse of the scandalous legal action against me by the North Yorkshire Police – and the resultant boost to my credibility (and readership).

Even before that, concerns were being aired that find their roots in precisely the same humane value system that has gained so much currency since Jeremy CORBYN MP gave voice to the growing conviction of his many supporters.

But neither the Labour Party nor any other holds a monopoly on humane values.

Which brings me to the purpose of this letter.

There is a burgeoning public perception that this Council, even granting cognisance of the straitened financial climate, holds money above people in its hierarchy of priorities.

I did not attend the meeting of Council on Monday 11th January 2016; I viewed the webcast.

I was particularly interested to see Councillor Liz COLLING [Lab.] attempt to raise a motion on the matter of the Council’s moral obligation to pay a living wage. Firmly shepherded by the (then) Mayor, the Conservative majority would not countenance even a tentative discussion of the proposal.

Does this bespeak a caring Council? A Council that expects its own employees to live on less than a living wage?

Recently, we have observed the successful legal action by former Council employee Ben MARRIOTT against the Council in a matter of constructive dismissal, following some appalling treatment by the Council, in breach of its own Whistleblower Policy and in flagrant disregard of its statutory Duty of Care to former SBC employee Ben MARRIOTT – who (you may not know) suffered two heart attacks along the way, brought on by the stress visited upon him by the Council’s actions and inactions.

His Honour Judge Humphrey FORREST commented, in his judgment of 5th August 2016, thus:

This case alone will cost the Council (or its insurers) a great deal of money – and money, remember, is supremely important. More important, even, than people.

How many members of the Council are fully aware of the minutiae of this case?

How many members of the electorate know anything about it at all?

Were you aware, for example, that I have published four articles about it, starting in August 2013?

Where you aware that, in September 2013, your Director of Legal & Democratic Services, Mrs Lisa DIXON, declined my offer to provide evidential information supportive to Whistleblower Ben MARRIOTT’s allegations?

These questions are partly rhetorical. Their purpose is to intimate to you that ordinary members of the Council (by which I mean non-Cabinet members) cannot justly be held to account for actions which were executed by others – then concealed from the majority of non-Cabinet members, by stealth.

Both Councillors were assured repeatedly by Officers that they had rigorously complied with the relevant policies/procedures and were unshakeable in their confidence in the Council’s ability to defend the claim.

They were wrong. Calamitously wrong.

When Ben MARRIOTT’s claim did come to court in Hull (1st – 5th August 2016), Judge FORREST stopped barely short of flaying them all (the Officers, that is – and I include Chief Executive Mr Jim DILLON) alive.

At the heart of this case lies the Council’s utter and abject failure to fulfil its Duty of Care to Whistleblower Ben MARRIOTT.

That all this should have been in train throughout the period in which the Council was undergoing the most severe and relentless criticism, nationally, over its failure of Duty of Care towards the victims/survivors of a former Mayor of the Borough is incomprehensible.

Even after Assistant Chief Constable Paul KENNEDY of the North Yorkshire Police and County Councillor Carl LES [Con.] (Leader of NYCC and Chair of the NY Police & Crime Panel) had published appropriate apologies on behalf of their respective authorities, Leader Councillor Derek BASTIMAN [Con.] (and before him, Leader (then Mayor) Tom FOX [Con.]) determinedly disregarded appeals for an apology – and not only from me.

It becomes glaringly obvious that the Leadership of this Council is all-too-readily perceived to be oblivious to humane values and the requirements of Duty of Care, where they conflict with reputational damage limitation.

And now, barely a month after HHJ FORREST’s scathing condemnation of the Council for its disregard of Duty of Care in the Ben MARRIOTT case, comes the case of Councillor Michelle DONOHUE-MONCRIEFF [Con.] (Hertford).

Here, for your convenience of reference, I provide you with a copy of Councillor Michelle DONOHOE-MONCRIEFF’s Personal Statement concerning reports of an incident outside a Hunmanby public house in consequence of which she was summarily relieved of her Portfolio and her delegation to the Police & Crime Panel of North Yorkshire.

Please be clear that the issue here, from a strictly Council perspective, is not whether or not the former Portfolio Holder for Democracy, Neighbourhoods and Stronger & Safer Communities (and former SBC delegate to the Police & Crime Panel for North Yorkshire) has committed a crime.

That is a matter for the North Yorkshire Police and (perhaps) the judiciary – and let us remember that Councillor DONOHUE-MONCRIEFF [Con.] is entitled to a presumption of innocence and the benefit of any doubt.

Nor is it a matter of whether or not Councillor DONOHUE-MONCRIEFF [Con.] has misled us in her public assertions to the effect that she suffered a mental breakdown which left her unaware of her actions at the time of the alleged incident.

That is also a matter for the Police – and, perhaps, for the psychiatrists.

So let us remember that Councillor DONOHUE-MONCRIEFF [Con.] is entitled to legal representation and the benefit of professional medical opinion (and any such treatment as that may entail).

The issue here that concerns the Council is the strong suspicion of another abysmal breach of Duty of Care on the part of the Leader, Councillor Derek BASTIMAN [Con.], supported by Conservative Group Leader Councillor Joe PLANT [Con.], as revealed by the recorded time-line of events.

Make no mistake about this; there is every reason to believe that a tort may have been committed.

In any tort action, there are three elements to be established:

Councillor Michelle DONOHUE-MONCRIEFF [Con.] appears to have been summarily and without due process deprived of her extra-responsibility Allowances (i.e. of all but her Basic Allowance).

I invite Councillors carefully to consider whether or not an innate breach of Duty of Care has taken place inherent in the Leader’s actions in relation to his own appointee, Councillor Michelle DONOHUE-MONCRIEFF [Con.].

And I invite each of you, individually, carefully to consider whether or not the actions and omissions of the Leader in relation to his own appointee, Councillor Michelle DONOHUE-MONCRIEFF [Con.] – perhaps motivated by a desire to minimise any reputational damage (even more important, in some minds, than either the money or humane values) – reflect your own system of values.

You may feel, as I feel, that the Leader should be called upon to provide you, and the public whom you represent, with a comprehensive explanation of the rationale that informed his actions and omissions, in open Council.

I readily acknowledge that some of you may feel it inappropriate (in some way) for me to address you collectively and in the public domain. Some of you may even support the Council’s habitual predilection for secrecy over transparency.

In the coming days and weeks, I will be reporting on a series of incidents in which the Council has exercised a highly selective approach to transparency. And I will be demonstrating how, as a matter of practice and policy, the Council, under the present Leadership, has repeatedly placed reputational damage control far ahead of money or people.

I fear that it will make shameful copy.