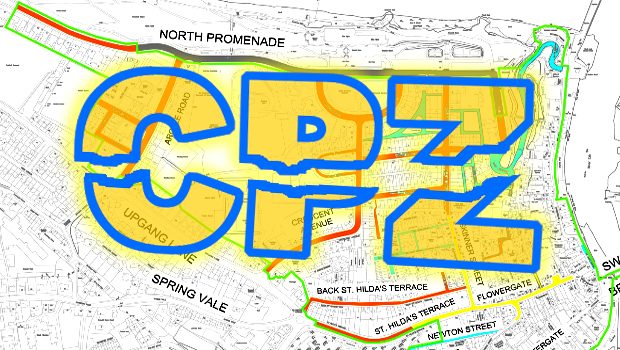 On the 16th August 2019 Scarborough Borough Council (SBC) lost another case at the Traffic Penalty Tribunal.

Maggie Kennedy, Adjudicator for the Traffic Penalty Tribunal, described SBC’s town centre Controlled Parking Zone as an “an inelegant mess” and concluded the zone was “inadequately marked” and was “consequently unenforceable” back in 2016 delivered another damning verdict of the council that seems to know very little about parking enforcement law. This time Mrs Kennedy’s decision concerned the Whitby Controlled Parking Zone.

A visitor to Whitby, Mr Stíobhart Matulevicz, rented a cottage and was given a Four Day Scratch Card Holiday Accommodation Visitor Parking Permit and parked outside the property where this sign was displayed.

Subsequently his vehicle acquired a PCN from the council who are always hungry for easy money from taxpayers.

After reading about the conduct of the council regarding parking enforcement on the North Yorks Enquirer Mr Matulevicz decided to use the standard appeals process for PCNs and fight his parking ticket.

Mr Matulevicz argued that the “No permits or scratchcards” sign was confusing as a scratchcard is classed as a permit, but the illegal sign above it also allows permit parking in Zone H. The signs contradict each other.

In their defence of their “No permits or scratchcards” sign SBC stated:

I note your comments. However, the signs and their placement are prescribed by the Department for Transport. All signs used in a controlled parking zone have to conform to The Traffic Signs Regulations and General Directions 2016.

The middle sign stating “No permits or scratchcards” is not a prescribed sign within the Traffic Signs Regulations and General Directions 2016 (TSRGD), and does not appear to be a permitted parking expression in accordance with Schedule 18 of the TSRGD. The Council produce no evidence of their having any special authorisation from the Secretary of State to use this sign. I conclude that its use is unlawful, at least for the purposes of issuing and enforcing a PCN.

Mrs Kennedy further stated that in addition to the unlawful signage, because the council did not send a “Notice of Rejection” to Mr Matulevicz as per the standard PCN appeals process, they were guilty of procedural impropriety.

At one time or another all signs in the controlled parking zone have been declared illegal by the Traffic Penalty Tribunal. Clearly the folks in parking enforcement and legal are in dire need of some proper training.

They have made a complete hash of their Public Space Protection Orders too.

Residents and tourists alike are being unfairly penalised by a council that obviously doesn’t know what it is doing with regard to parking enforcement. Refunds must follow. Proper legal training is a must for staff involved and the senior manager in charge of this mess needs an urgent trip to the jobcentre. Unacceptable.