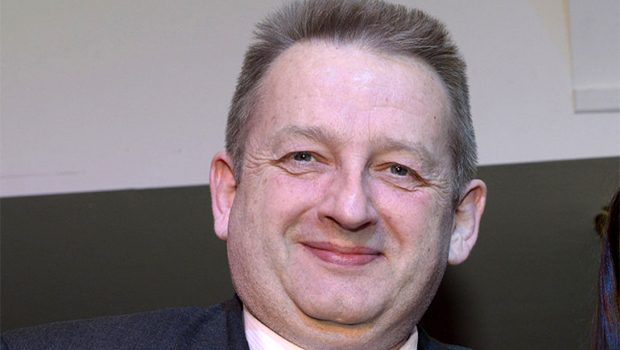 Before the live webcast of the SBC Cabinet Meeting of Tuesday 18th July 2017 was half complete, I received a number of phone calls and messages expressing maximal outrage at the astonishing performance of Councillor Bill CHATT [Ind.].

That outrage is fully understandable. Councillor CHATT’s remarks amounted to a vitriolic attack on critics, commentators and fellow Councillors whom CHATT lacked the courage to come out and name.

The Yorkshire Coast Radio news coverage barely scratched the surface of another priceless ‘own goal’ from the brains’ trust: 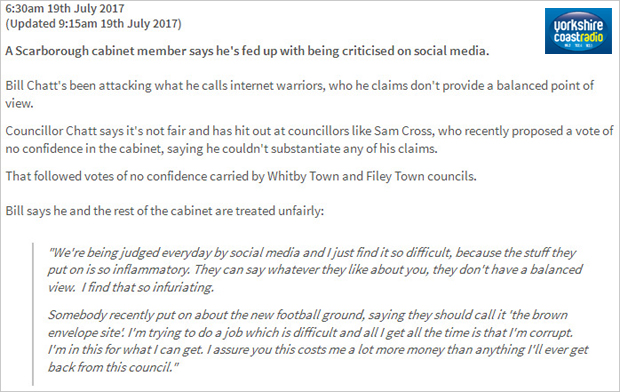 For convenience of reference, Councillor CHATT’s ‘speech’ can be loosely divided into the following sections:

00:00 to 00:30 – remarks relating to the No Confidence Motion (which Councillor CHATT describes as a “farce”) and describing the Proposer (Councillor CROSS) as “an empty tin that makes a lot of noise and didn’t do anything else”.

03:05 to 03:40 – remarks relating to “some Councillors” using social media to communicate information relating to a fire hazard at a block of flats in Whitby.

03:40 to 03:50 – further remarks relating to the “farce” (Councillor CHATT’s word) of the three No Confidence Motions and his indignation and anger at having been described on social media, along with Councillor John NOCK [Con.], as “paedophile supporters” – at which point Cabinet Chair and Council Leader Councillor Derek BASTIMAN [Con.] finally takes charge of his Meeting and belatedly draws a halt to Councillor CHATT’s hypocritical tirade.

So let us not rule the possibility, at least, that Councillor CHATT was called upon to deliver a thuggish response to the tsunami of criticism that has deluged the Cabinet. Bill ‘Hitman’ CHATT has earned from me the following opinion.

The abiding conclusion must be that the Cabinet members consider themselves a large part of the Ruling Class – not a small part of the Serving Class, which, in a democracy, is exactly what they are.

I begin my critique with Section 1:

Few would take issue with Councillor CHATT’s characterisation of the No Confidence Motion saga as a “farce”.

It was a farce at a number of levels:

Presumably, Councillor CHATT remains unaware that social media is now an accepted avenue of communication between members of the public and government institutions – even for the lodging of Freedom of Information requests and Formal Complaints, via Twitter and Facebook?

I know of no web-site other than the North Yorks Enquirer that scrutinises and reports in detail on the pitiful performance of Scarborough Borough Council and other local authorities. Is this the “certain website” to which Councillor CHATT refers? Why is he afraid to say so? It cannot be for fear of a Standards Complaint, since everybody knows that the maximun sanction available to the Standards Committee is 15 minutes “re-training” from the Monitoring Officer (Mrs DIXON). Councillor John NOCK’s ‘punishment’ for his disreputable JACONELLI remarks was a chat with Councillor Andy BACKHOUSE [Con.] – at that time Leader of the Conservative Group.

As regards to Councillor CHATT’s suggestion that communications with Councillors should pass through the proper channels, perhaps he has forgotten that when Enquirer contributor Tim HICKS asked him a perfectly reasonable question, couched in civil and appropriate terms, asking him to explain his (Councillor CHATT’s) receipt of IT/Broadband Allowances from both NYCC and SBC (“double dipping”), for one and the same broadband connection, Councillor CHATT – who claims to be able to “work with the press” – offered the following “balanced” response was:

Aside from the facile grammatical errors, does Councillor CHATT really consider that this was an appropriate response to a legitimate enquiry through the proper channels about his apparent abuse of the Allowances system? Farce #7. In my view, this is evidence enough of an arrogant, ignorant, boorish moron unfit for public office.

And on the subject of “keyboard warriors”, “trolls” and “chinless” (“and I do say chinless”) critics ( whatever the hell that is supposed to mean), let us be clear that NYE contributors do not “hide behind their keyboards”. We write under our own names, we attend public meetings in person – without wearing disguises – and we produce public record documentation, official correspondence, FOIA responses and primary legislation  in support of our conclusions.

Councillor CHATT’s rant is factually in error at every step, expressed in the language of the schoolyard – or the gutter.

Councillor CHATT has hidden his displeasure at “some Councillors” behind a cheap cop-out, when he refers, in particular, to Councillor Rob BARNETT [Lab.], who had been stone-walled in his attempts, following the Grenfell Towers disaster, to have Yorkshire Coast Homes address the dangerous fire hazard at the Whitby flats to which Councillor CHATT refers.

Let us talk about Farce #8 – “the truth” that Councillor CHATT claims to desire. The truth is that only through publication on the Enquirer of Councillor BARNETT’s Letter to the Editor, followed by my own personal correspondence with Mr Bill MILLER, Director of Operations at Yorkshire Coast Homes, was the matter satisfactorily resolved. The truth is that Councillor CHATT was oblivious to the issue until a member of the public (Mr R W) drew Councillor BARNETT’s NYE letter to his attention (I was copied in); his remarks in Cabinet, therefore, were disingenuous in the extreme. I look forward to publishing my YCH correspondence here on the Enquirer if Councillor CHATT has the gall to challenge me. Please do.

“YCH have informed the Housing Association responsible for the flat and they are dealing with this matter.”

I find it almost incredible that Councillor CHATT has the gall to raise the spectre of predatory paedophile (or ‘hebephile’, as Councillor John NOCK’s defenders would have it), Peter JACONELLI [Con.] – former North Yorkshire and Scarborough Councillor, Mayor and Alderman.

Let us be clear that I, for one, have never described Councillor CHATT or Councillor John NOCK [Con.]  as “paedophile supporters”. Nor have I ever seen anything in the Enquirer or on social media making that assertion.

What I have stated – and I repeat it without hesitation – is that both CHATT and NOCK are on the record making excuses for Peter JACONELLI. In my view, this fully justifies referring to them as “JACONELLI apologists”.

“He [Jaconelli] wasn’t like Savile. He was not a predatory paedophile. He was only handing out money to poor kids for giving him a wank”.

“Only” coercing minors into homosexual prostitution – as if such conduct were perfectly acceptable. It is not. It is criminal. And morally insupportable.

And, as if that were not contemptible enough, Councillor John NOCK [Con.] then proceeded, with the assistance of a Google wizard in the SBC Legal Department, to attempt to mitigate his disgrace by claiming that Peter JACONELLI was not actually a ‘paedophile’ at all – the strict legal definition of which refers to victims under the age of fourteen – on the grounds that Peter JACONELLI (NOCK asserts) was only a ‘hebephile’ – a form of sexual abuser who restricts his predatory perversion to children over fourteen. How he could claim to know the age of each and every JACONELLI victim/survivor remains to be explained. Councillor NOCK then arguably libelled the two Councillors who complained against him (in the Scarborough News) by asserting that it was they who, by doing so, had brought the Council into disrepute. Another “farce” – Farce #9. Read more here.

On 29th May 2014, I reported on Councillor Bill CHATT’s unsubtle remarks in the Council Chamber, in praise of Peter JACONELLI, when he gave his reasons for not supporting the otherwise unanimously carried Motion to strip JACONELLI of all civic honours:

And then, adding insult to considerable injury, Leader Councillor Derek BASTIMAN [Con.] displayed the depths of his poor judgement by appointing Councillor NOCK to a Cabinet position. It should not be forgotten that Councillor BASTIMAN has consistently declined to follow in the footsteps of NYCC Leader County Councillor Carl LES and Assistant Chief Constable Paul KENNEDY of the North Yorkshire Police by offering an apology to JACONELLI victims/survivors for the failures in Duty of care by their respective institutions. So three members of the present Cabinet have amply demostrated that they would appear to be soft on child abusers, rather like the paedo-friendly Director of Public Prosecutions who suppressed charges agains JACONELLI back in 1972, his Mayoral year. Yet Councillor CHATT claims that he and his colleagues are hard done-by by their critics. Farce #10. Pass me the vomit bag.

So you know what they say about parapet politics, Billy Boy?

“If you can’t stand the heat, get out of the kitchen!” 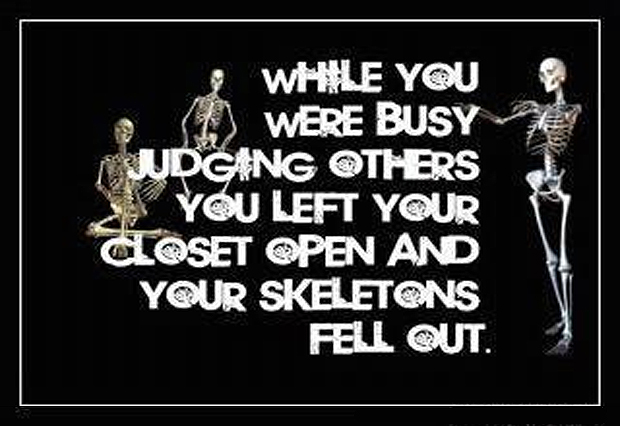