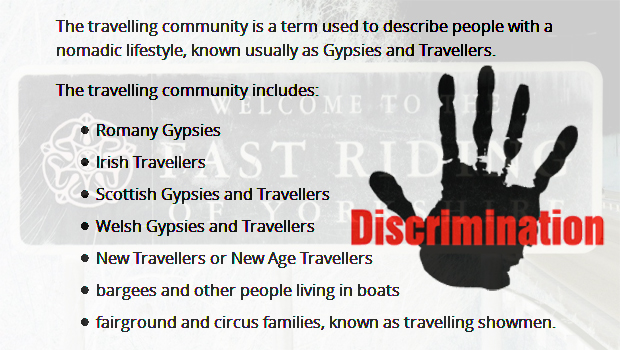 Guest Author East Riding of Yorkshire Councillor Andy STRANGEWAY reports on on the questionable ERYC commitment to ‘zero tolerance’ with regard to discrimination and hate crime.

At the meeting of the Full Council on 27 July 2016 the topic of Travellers was raised.

Councillor Robson had asked, “Would the Leader examine an effective, permanent solution, to prevent the annual criminal trespass of travellers onto Jubilee Woods grasslands, Bridlington?”. Councillor Boatman asked a supplementary question about the need for more transient sites to tackle the problem at its root cause.

In his eagerness to discredit both of these non-Con elected Members, the Council Leader revealed the prejudices of himself and his Group.  Cllr Boatman’s question resulted in a sneering call for Councillors to volunteer “who wants the site in their ward?”, to which the ERYC Cons loyally followed their Leader with sneering looks and noises.

Romany Gypsies and Irish Travellers are legally recognised as ethnic groups, and protected from discrimination by the Race Relations Act (1976, amended 2000) and the Human Rights Act (1998). I am informed that those at Jubilee Woods were Romany.

I believe the sneering by the Cons to be a disgrace, in breach of Human Rights and a hate crime.

A Hate Incident is any incident which the victim, or anyone else, thinks is based on someone’s prejudice towards them because of their race, religion, sexual orientation, disability or because they are transgender.

I believe the sneering towards those who would use or welcome any transient traveller encampment was certainly based on prejudice towards them due to their race.

“To consider the following Motion(s), notice of which has been duly given and to pass such resolutions as may be appropriate.

(a)  By Councillor Billinger

“That the East Riding of Yorkshire Council severely condemns the 42% reported rise in hate crimes and the general increase in xenophobic behaviour since the United Kingdom voted to leave the European Union.

“It requests the Council’s Chief Executive to write to the Chief Constable of Humberside Police to ensure a zero tolerance policy is pursued in relation to this serious matter.”

Ironically, Cllr Parnaby’s contribution to the debate was to refer to the launch of Humberside Police’s campaign the previous day, with its slogan “Being you is not a crime, targeting you is.” He must have forgotten this when answering Cllr Robson’s question.

While discussing the motion I raised the subject of the disgraceful conduct by the Cons.

The motion was passed.

I believe that the ERYC Chief Executive Nigel Pearson, who witnessed the full incident, must demonstrate a zero tolerance by:

I have emailed Nigel requesting that he takes immediate and appropriate action.