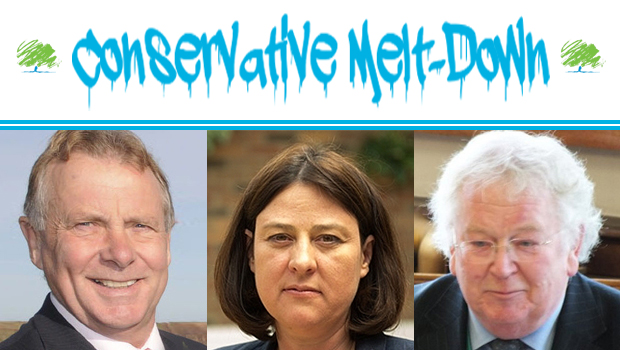 Many Enquirer readers who also follow the anti-corruption and public interest endeavours of East Riding of Yorkshire Councillor Andy STRANGEWAY [Ind.Ind.] will have seen his article covering the extraordinary Tweet by Angus YOUNG, political columnist for the Hull Daily Mail, disclosing an allegedly ‘leaked’ hand-written list of seventeen ERYC Tory Councillors who supposedly will not seek re-election in May 2019. 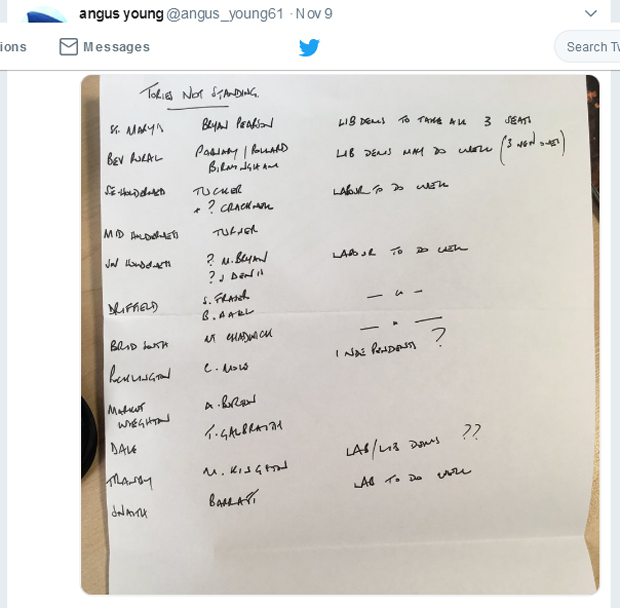 The suggestion is that the furore surrounding the various allegations against ERYC Leader Councillor Stephen PARNABY [Con.] has wreaked havoc upon the Conservatives’ public approval ratings, leaving Members whose majorities are slender suddenly at high risk of defeat next May. Some are opting to step down rather than suffer the humiliation of a trouncing at the ballot-boxes.

In North Yorkshire, too, Conservative NYCC Councillors are experiencing a burgeoning crisis of confidence regarding one of their highest-profile public figures.

Police & Crime Commissioner Julia MULLIGAN [Con.] is floundering at present, having at first been defiantly unrepentant over the NYP&C Panel’s finding that she bullied staff, then publishing a weasel-worded ‘apology’ – she is sorry, she says, that staff members ‘perceived’ themselves to have been bullied by her. That would be their mistake, then? Snowflakes? As apologies go, this one was a classic example of “too little, too late”. The image below reproduces BBC local news coverage.

As one respected political correspondent commented, “She’s on the skids!”.

I will be astonished if Mrs MULLIGAN is still in office by the conclusion of her present term (May 2020); May 2019 may see a new P&CC elected.

This collapse of confidence, as is usually the case in politics, is proving to be highly contagious, infecting everyone it touches.

Thus, I can now disclose that the Enquirer has received numerous reports of a festering discontent within the Scarborough & Whitby Conservative Association (SWCA).

SWCA members are reportedly ‘furious’ with Scarborough Borough Council Leader Councillor Derek BASTIMAN [Con.] after he used his position as Leader to protect and promote an Opposition member during the Council Meeting of the 5th November 2018,  Leader’s Questions, which the Leader pithily dubbed “The Chat Show”.

(Eventually, the Mayor may get the hang of pronouncing the words “Donohue-Moncrieff” – though perhaps not in this lifetime.)

“This is a kick in the teeth for our members who are out and about pre-campaigning for Conservative candidates! We are clearly wasting our time and efforts when they are undermined by the Leader so blatantly ‘bigging up’ a non-Conservative. He has made it impossible for any Conservative candidate to stand against this individual – not to mention the damage such displays are inflicting on the current crop of Conservative Councillors.”

No prizes for guessing the identity of the unspecified “individual”, given the Leader’s “Chat Show” quip.

The thinking seems to be that if Councillor BASTIMAN considers his own Party’s Councillors not good enough to serve in his Cabinet, how should Tory door-knockers persuade voters to put their trust in them? It is a fair question, too long unasked.

By spurning Conservative Group members when appointing his Cabinet, in favour of two independent Independents, Councillors Mike COCKERILL and Bill CHATT, the Leader has invited criticism that he is sending voters the message that his own Group members are, at best, second-rate. In mitigation, the Leader may argue that there is no-one amongst the reduced ranks of Tory Councillors who could do justice to those challenging Portfolios (Major Projects and Public Health & Housing, respectively) – or would dare an attempt. In other words, the Leader’s only plausible defence is that the Conservative group is indeed awash with second-raters. A rock and a hard place. Uneasy lies the head that wears the crown . . .

Granted that appointment to Cabinet Portfolios  constitutes one of the standing operating procedures for ‘buying’ the loyalty of ‘useful idiots’ (needed, from time to time, for pushing through decisions in potentially ‘tight’ voting situations), concerns are being expressed that Councillor BASTIMAN and his cronies have effectively squandered the Party’s majority on the Council by forcing out some of the more talented members of his own Party. Councillors Andy BACKHOUSE and Michelle DONOHUE-MONCRIEFF spring readily to mind. Both have been out of favour; both are of a far higher intellectual calibre than most of the present incumbents – the Leader not necessarily excluded.

It has also been suggested that it had been Councillor Tom FOX‘s firm expectation to be offered a return to the Cabinet following his Mayoral year. Certainly, from a Conservative perspective, his ten years as Leader amounts to indispensable experience; he is wasted on the back benches – even if his Police service throughout the JACONELLI years has permanently tarnished his otherwise considerable appeal.

In addition to his membership of SBC, Councillor Andy BACKHOUSE is also a North Yorkshire County Councillor. At one time an ambitious man, he has rather missed his way in recent times (what with one thing and another). The door appears closed to him now in respect of his one-time parliamentary ambitions. But the Leadership may yet be within his grasp . . .

Furthermore, Tory members are beginning to wonder whether Councillor BASTIMAN has a genuine commitment to the Conservative ethos, or whether he is just a monomaniacal ‘chancer’ who has co-opted the Conservative electoral machine for his personal battle-wagon.

It is widely held that the Leader has dumped just about anyone with any ability and surrounded himself instead with compliant ‘yes-men’, at least one of whom had his limitations publicly paraded in the Mayoral role not too long ago. When rank-and-file members of the Party are commenting on the fact that few of the Portfolio Holders seem capable of stringing a coherent sentence together, small wonder that they are growing fearful about how highly members of the public will rate Conservative competence to run the Council for the next four years.

It would be surprising if persistent rumours of displaced senior Councillors preparing Leadership challenges turned out to be baseless.

As things stand, a Leadership change seems likely to be welcomed by party members, who are apprehensive now about the prospects of a workable Conservative majority next May – or even a Conservative-led Council – unless the Party can re-invent itself by campaigning behind a new and credible Leader. Councillor David CHANCE, an Executive Councillor at NYCC as well as a former SBC Cabinet Portfolio Holder, is mentioned by some, but the real battle for Tory hearts and minds seems more likely to be between Councillors Andy BACKHOUSE and Tom FOX – if the latter can surmount BASTIMAN’s efforts to freeze him out.

The Conservative rule-book states that any party member campaigning against an officially nominated Conservative candidate is liable to summary dismissal. Any member – including an incumbent Council Leader.

Yet the Enquirer has learned, from an impeccable source, that the ‘war’ is already on; Councillor BASTIMAN has apparently been circling the wagons, exhorting his cronies to do all they can to prevent one of his strongest challengers from obtaining a nomination in any ward. This could back-fire, encouraging others to attempt – or back – a coup.

There have been rumblings and grumblings for some time now about the BASTIMAN regime, which has seen SBC sink from being one of the most dynamic “can-do” Councils in the north, attracting huge external investment, to being a heavy-handed, scandal-beset, rule-book-flouting “can’t do” Council, characterised by secrecy and audit problems, whilst establishing the Borough as the ‘low-pay capital’ of the nation, with beaches unfit for seaside holidays. That is quite some fall from grace.

Though some might say Derek BASTIMAN inherited a crock of crap, many would say, perhaps rightly, that he has certainly heaped it higher. What the SWCA is saying is this:

“Why, with experience like BACKHOUSE, FOX and CHANCE languishing on the back benches, is BASTIMAN content to appoint ‘outsiders’ COCKERILL and CHATT?”

In short, BASTIMAN is in the dog-house. It has even been suggested that discussions are ongoing as to whether or not Tory members will refer the embattled Leader to the Conservative Party Board’s Disciplinary Committee.

Summing up the present state-of-play in the Borough of Scarborough, one of the Enquirer’s main sources was emphatic in concluding:

“If the Leader doesn’t want a Conservative Cabinet and a Conservative Council and continues to undermine Party candidates, he may well find himself standing as an independent next May.”

He may not be standing at all.

Of course, it is also possible that some Tory double-agents have been winding me up a treat. Time will tell. Though I often turn out to be right in the long run. Roll on May, eh?