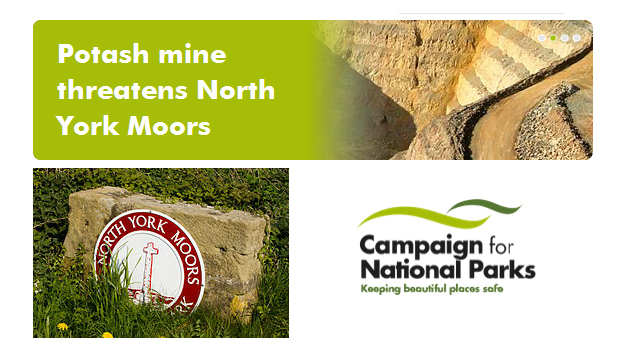 The Campaign for National Parks has published the following statement [10.12.14] in response to the NYMNPA announcement that there are to be further delays, including a re-consultation exercise, in respect of the York Potash Ltd proposed potash mine.

The Campaign for National Parks said it was frustrated by today’s news that the company behind proposals to build Europe’s largest potash mine in the North York Moors still hasn’t provided the full facts about the impact on the National Park. The National Park Authority (NPA) has announced that York Potash want to make amendments to key parts of the planning application and that they are expecting to submit further information in January 2015. The new information will include important details relating to transport and the amount of spoil generated by the project both of which could have significant environmental impacts.

There was a very similar situation in 2013 when the NPA had to ask York Potash to provide additional information to address a number of significant errors and omissions in the previous application for this project. While every planning application should contain all the information that decision makers need to assess it properly, this is even more important in National Parks where additional planning protection applies.

Commenting on today’s announcement, Ruth Bradshaw, Policy and Research Manager said: “This demonstrates that York Potash still haven’t understood the significance of National Park status. Even after all this extra time, they have still not been able to deliver a planning application which includes the information that planners need. The law is very clear on the need to provide a full assessment of the environmental impacts of projects of this scale and that’s particularly important in a National Park.”

Ms Bradshaw added: “It’s not clear whether this latest omission is an oversight or a deliberate attempt to obscure the facts. However, what is clear is that any delays caused to the decision-making process are entirely the company’s responsibility. This will mean further uncertainty for all those affected by the proposal and could also lead to even higher expenditure for the NPA which has already had to spend a significant part of its budget dealing with this planning application.”

After being postponed twice, in July 2013 the decision on the previous application was deferred indefinitely at the last minute at York Potash’s request to allow them to submit further essential information. There then followed months of uncertainty for the NPA and local communities before York Potash finally withdrew that application completely.

We objected to the previous application on the grounds that developments of this scale are only allowed in a National Park in exceptional circumstances, and when they can be demonstrated to be in the public interest. We believe there are strong grounds for turning down the current application and are currently preparing our detailed response.