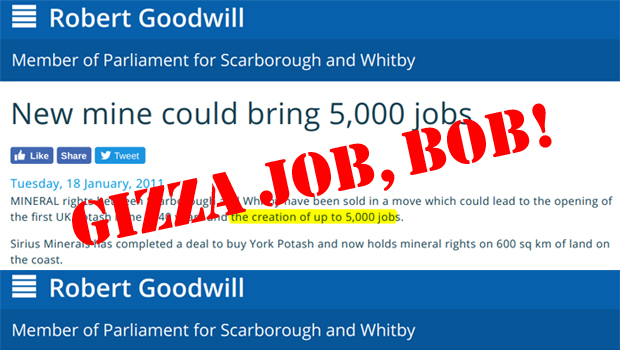 An Open Letter from Mr Ken GRAHAM, local businessman and former Whitby Town Councillor, to Scarborough & Whitby MP Robert GOODWILL [Con.],  commenting on the present reality surrounding the employment boost predicted over seven years ago by Mr GOODWILL, whose widely propagated expectation it then was that the Sirius Minerals polyhalite mining operation at Holly Bush Farm near Whitby would result in the “creation of up to 5,000 jobs”.

As Mr GRAHAM points out, “This doesn’t seem to have been the case” – at least as far as Whitby workers are concerned.

What happened to the promise of local jobs for local people at the new Potash mine?

The contractor/company Beuer Technologies at present have 145 employees, and are in the process of recruiting another 40. Correct me if I am wrong; I am led to believe that they are all being recruited from the Teeside area.

The 40 vacant posts that are being filled at present have being advertised in Teeside and offered only to people in that area, or so it would appear.

Lots of people from the Whitby area inform me they have applied, and not only have they not been successful but haven’t even being considered.
It is not as if they are specialist jobs; they are general construction work jobs.  Despite Whitby having probably the greatest concentration of scaffolders in the Country, even the scaffolders are from Teeside.  If these figures are correct, then maybe 180-plus non-specialised jobs, NOT being filled by workers from this area is an absolute disgrace!

I have also been made aware that a good rate of pay is being offered. The take-home pay is in excess of £500 per week. That could easily be £100,000 per week being diverted away from Whitby to Teeside and our locality cannot stand that.

If you have got to bring people in from Teeside to operate a high pressure washer there is something wrong somewhere. Had it not been for locals with drilling experience to man the rig that was deployed at the mine, then there would not have been anyone from Whitby employed there yet at all.

Whitby men have worked and travelled round the world and are known by industrial companies for there hard work, endurance and versatility.

There should be questions asked. I was a member of Whitby Town Council in 2010 when this was beingdiscussed, before the planning permission, and it was all about local jobs and local prosperity. Yet it is not long since this Borough was recognised as the “low-pay capital of Britain”, and the local politicians were hailing the Potash Mine as a saviour that wass going to bring prosperity to local people.

This doesn’t seem to have been the case.