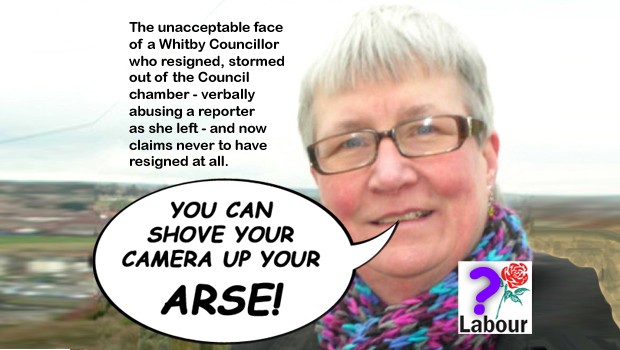 Readers may recall an incident which took place at Whitby Town Council on Tuesday 7th March 2017 (the meeting immediately following the meeting at which the motion of ‘No Confidence’ in SBC Leader Councillor Derek BASTIMAN [Con.] and his Cabinet was successfully carried), when Whitby Town Mayor Councillor Noreen WILSON [Lab.] threw a tantrum, closed the meeting, then stomped out like a raging dinosaur, calling a member of the public (Ron WILKEY) a “knob” on the way out. Twice.

This is the same Councillor WILSON who had previously told a citizen journalist to “Shove his camera up his arse”.

In 2014, Councillor WILSON threatened to resign over the issue of Council meetings being filmed for the public record. It is easy to see why.

Councillor WILSON herself takes a sterner view of far lesser forms of poor behaviour. A Whitby Gazette report, dated  March 2012, indicated that she supports the draconian punishment of imprisonment for serial feeders of seagulls. Her views on foul-mouthed tirades by public servants against members of the public can only be imagined.

I can now report that the SBC Deputy (perhaps future?) Monitoring Officer David P. KITSON and the two ‘Independent’ Persons have considered a Formal Complaint against the foul-mouthed old harridan and arrived at the entirely predictable (and predicted) conclusion that, since Councillor WILSON had already closed the meeting, she was no longer acting in her official capacity and therefore fell outside of the terms of the Councillors’ Code of Conduct.

Not so much as the proverbial slap on the wrist.

Here follows a priceless extract from the Standards Decision:

Asked to comment, one Whitby Town Councillor (who had witnessed both the “knob” and the “shove your camera up your arse” incidents) told the Enquirer:

“The ignorant old sow is only in the Chair because nobody else thinks the so-called ‘accolade’ of serving as Town Mayor is worth the wick, never mind the candle. Safe in the knowledge that I am not commenting in my official capacity, I can truthfully state my opinion that she is about as much use to Whitby as a wet fart in a northerly. Silly boy Kitson has now demonstrated the utter worthlessness of the Standards system and opened the floodgates to all the pent-up torrents of richly-deserved oprobium awaiting our apology for a Mayor. I can hardly wait.”

I have toyed with the idea of naming-and-shaming said Councillor – followed by a Formal Complaint to the Monitoring Officer – but what would be the point? Mr KITSON has determined that where Article 1 of the Councillors’ Code of Conduct states

this should, in fact, be interpreted as “You must not treat others with disrespect – but as soon as the meeting is over you can berate and abuse others with absolute impunity”. The court of public opinion may determine otherwise.

Speaking of apologies, Councillor WILSON has not apologised for either of her foul-mouthed outbursts.

Mr KITSON and the two ‘Independent’ Persons have completely disregarded the obvious breach of Artilce 7 of the councillors’ Code of conduct:

7. You must not conduct yourself in a manner which could reasonably be regarded as bringing the Council into disrepute, or your position as a Councillor into disrepute.

I close with a hypothetical rhetorical question:

“Do readers consider it likely that IF an Opposition member at SBC were to step up after a meeting and tell the Leader that he ‘couldn’t find his own arse with both hands and a sniffer dog’ that the Deputy Monitoring Officer and the two ‘Independent’ persons would consider ‘No Further Action’ an appropriate outcome?”

Is that any different to Councillor WILSON’s “Knobs” and “Arses”?

In my view, not one bit.

Yet SBC Councillors are on the record calling the people of Scarborough “thick”. Is that not “disrespect”?

This is why I have been known to refer to the Standards regime as the ‘Double Standards’ regime.

For the edification of those who disagree with my opinion, I look forward to submitting for publication the details of the outcome of another Formal Complaint in a day or three – I can promise pure farce, far beyond the bounds of hypocrisy.