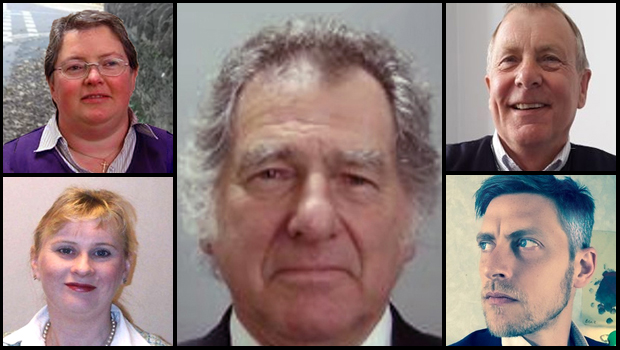 That same day, at 10:42 a.m., I emailed my Open Letter directly to Councillor NOCK via his Scarborough Borough Council email address: Cllr.John.Nock@scarborough.gov.uk

Casual readers will be astonished to learn that Councillor NOCK has failed to respond; regular readers will not.

I was surprised because I have been deemed “vexatious” (by some unknown person or persons at Scarborough Borough Council) and my emails are normally intercepted (by an automatic process set in place by Deputy Monitoring Officer David P. KITSON), allegedly to protect Councillors and Officers from the risk of being distressed by inappropriate content.

(Readers familiar with my writing style will appreciate that it would be difficult to write more reasonably and courteously than I do, though I do confess to permitting myself the occasional ironical turn of phrase in much the same way that I might comment on a particularly poor performance of a Brian RIX farce).

It was Mr David KITSON who informed Full Council, on 6th November 2017, that the Council was authorised to intercept emails under the terms of the Regulation of Investigatory Powers Act  2000 (Mr KITSON @ 2:20 in the video-clip; Councillor NOCK @ 4:03):

Unfortunately for Mr KITSON, the Council is NOT authorised to intercept emails under the terms of the Regulation of Investigatory Powers Act  2000. I cite the following information from a higher authority – the government web-site: 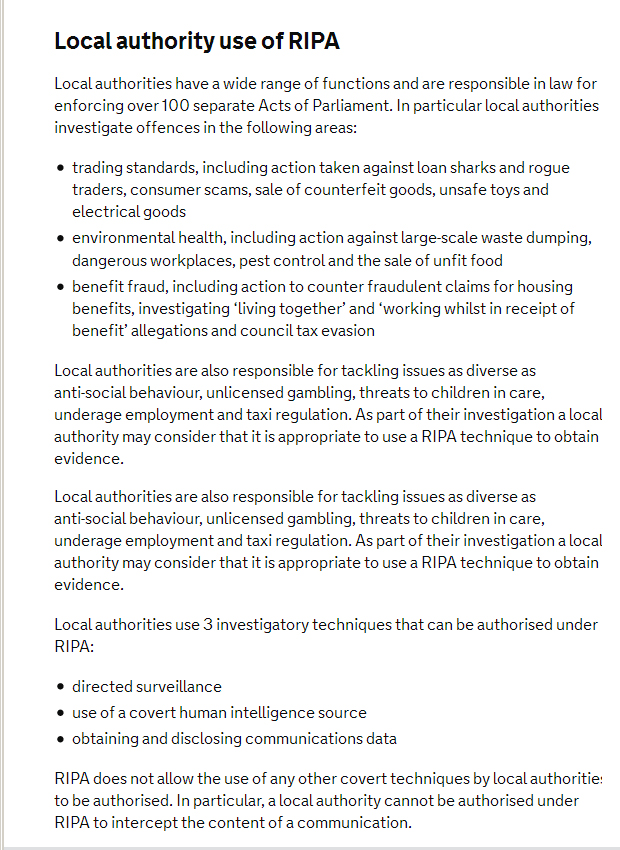 I reiterate that final sentence:

Scarborough Borough Council is “a local authority”; an email is “a communication”.  Case closed.

So Tim THORNE’s report of 7th November 2017, in which he stated that “Kitson flat out lied”, was accurate.

It is noteworthy, too, that neither I (nor any of the other persons known to me to have been deemed “vexatious”) ever received the notifications or warnings described by Mr KITSON in his statement to Council, so Mr KITSON has also misled Councillors in regard to the proper implementation of the Council’s own Policy, to which he has not adhered.

Notwithstanding Mr KITSON’s thoroughly exposed confabulations – swallowed in one credulous gulp and undiscriminatingly regurgitated by Councillor John NOCK [Con.] (in an email to a fellow Councillor) and by the Leader, Councillor Derek BASTIMAN [Con.] (in email correspondence with NYE contributor Tim HICKS FCA) – I do know that Councillor NOCK received my email containing my Open Letter; I have his read-receipt.

Returning to my Open Letter…

The subject matter of my Open Letter was (and is) the failure of Councillor Heather PHILLIPS [Con.], when attending a meeting of the Audit Committee on 22nd March 2016, to declare her pecuniary interest in the Motion to support the merging of the Standards Committee (of which she was/is Chair) into the Audit Committee, a merger which (had it proceeded – which for no declared reason, it has not) stood to deprive her of her Special Responsibility Allowance attendant upon that position. That is a pecuniary interest.

For convenience of reference, here are the questions I put before Councillor NOCK: 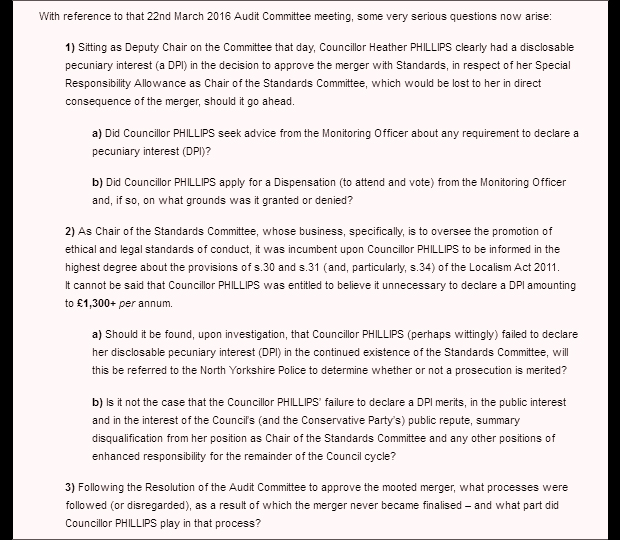 Failure to declare a disclosable pecuniary interest is a criminal offence under the Localism Act 2011, the relevant sections of which are reproduced here: 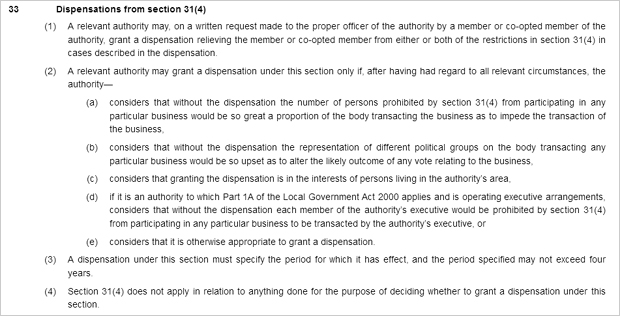 The very first Item on the Scarborough Borough Council ‘SUMMARY OF MONITORING OFFICER FUNCTIONS’ ANNEX document states that it is the Monitoring Officer’s duty to:

Of course, the Council will attempt to brush all this public record material under the proverbial carpet; all of these documents will be deemed “irrelevant”.

Nevertheless, I have emailed this article to Councillor NOCK, whom I call upon to stand accountable to me and the wider public by performing the following duties:

1) Register a Formal Complaint against Councillor Heather PHILLIPS on grounds of her apparent breach of the Councillors’ Code of Conduct and s.31 of the Localism Act 2011. The evidence is in the public record.

2) Register a Formal Corporate Complaint against Mr David P. KITSON for misleading Council and the wider public both in respect of his false reliance on RIPA and his failure to comply with Item 27 of SBC Protocol on Member/Officer Relations (See below). The evidence is in the public record.

3) Instruct his Supporting Officer, Mrs Lisa DIXON, Director of Legal & Democratic Services and Monitoring Officer, to request the North Yorkshire Police to investigate Councillor PHILLIPS’ apparent breaches of s.31 of the Localism Act 2011 and report to Full Council. Again, the evidence is in the public record.

Failure to comply on the part of Councillor NOCK will constitute irrefutable evidence of his dereliction of duty and his flagrant disregard of the Seventh NOLAN Principle which must, in turn, lead to a Formal Complaint – else the word “accountability” may as well be stricken from the English dictionary:

LEADERSHIP – Holders of public office should exhibit the principles in their own behaviour. They should actively promote and robustly support the principles and be willing to challenge poor behaviour wherever it occurs.

Get to work, please, Councillor NOCK.