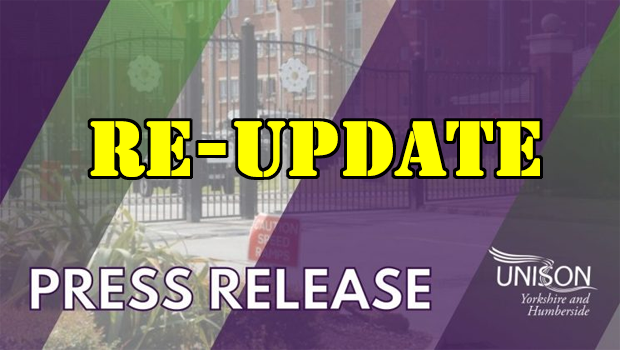 UNISON is escalating its opposition to plans by Harrogate Borough Council to transfer staff, who work in its Information Governance and Internal Audit services to Veritau, rather than the new North Yorkshire Council.  The issue now involves not only the Harrogate Branch of UNISON but also the Yorkshire and Humberside Regional Office of UNISON, based in Leeds.

This comes as both Harrogate Borough Council and County Council refuse to take responsibility for the decision to transfer the staff to Veritau at this late stage and without any formal consultation yet underway.

“In December UNISON received a letter from the Chief Executive of the new North Yorkshire Council, categorically stating that any decision around where staff would transfer to was up to the sovereign Council – in this case Harrogate – and that the expectation was that staff would transfer to the new Council. Indeed staff have received a communication only yesterday (23rd January) from the new Chief Executive saying that they will transfer to North Yorkshire Council on 1st April.”

“Following the lodging of our Dispute last week, which will be heard on Thursday (26th January), the Borough Council has come back to us to say that it was not their decision but that of North Yorkshire County Council using its transition/ implementation powers.  We have asked for some more detail around this but the upshot is that no one seems to want to take any responsibility for the decision.  That cannot be right.  This is incredibly stressful for staff who all along have had an expectation they would transfer to North Yorkshire Council.  This late change is unfair and is unacceptable.”

“We can reveal that in August last year, following concerns raised by UNISON, the staff were reassured by the Borough Council that they would be transferring to North Yorkshire Council on 1st April 2023.  It remains our belief that the decision is ultimately with the Borough Council and that the Council should stand by what it has previously told its staff.”

“Understandably we are pursuing this with both Councils, seeking clarity around decision-making, accountability, oversight and where the duty to engage with staff and UNISON actually rests.”

“We will, if necessary escalate our Dispute to Harrogate Council’s Human Resources committee and we have already tabled a public question for the Borough Council’s Overview and Scrutiny committee, that is scheduled to meet on 6th February to discuss Local Government Reorganisation.”

Harrogate does not have a full Council meeting scheduled until March which prevents any public questions being asked at full Council until then, which will be too late.

Veritau is a shared service group owned by local authorities in Yorkshire and north east England.

Some staff at Craven District Council are also set to transfer to Veritau.