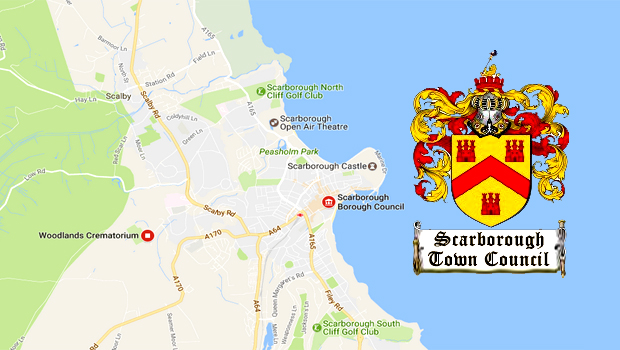 Following the resounding NO CONFIDENCE resolutions at Whitby Town Council and Filey Town Council, the Scarborough News readers’ poll (81% of nearly 2,000 polled) and the Scarborough resident’s on-line GoPetition (almost 2,500 signatories), social-media sites have attracted hundreds of comments asking when the people of Scarborough town will have their views represented by elected Councillors.

In contrast to what SBC likes to think of as its two satellite resorts, Scarborough town does not enjoy third-tier representation – it has no Town or Parish Council.

On Thursday 23rd February 2017, the Scarborough News published an article on this very subject: 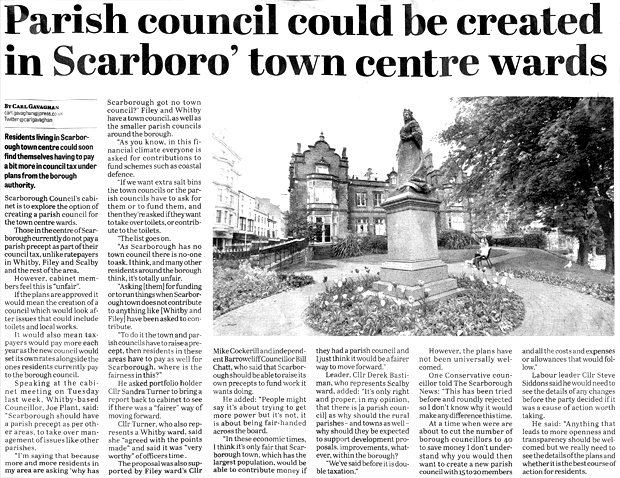 Let us briefly imagine what might be taking place at this present moment if the parishing of Scarborough’s central wards was already a fait accompli.

This would take the form of a Town Council – Scarborough Town Council. Based on population, it is fair to assume that such a Council would be constituted with a membership of in the order of 20 to 30 Councillors (Whitby has nineteen; Filey thirteen).

Possibly – in fact very probably – some of these Councillors could be presently-serving Borough Councillors, perhaps even one or two County Councillors, though there are no Allowances or Expenses for Town/Parish Councillors (except for a small operational budget to cover Mayoral civic duties), so perhaps membership of a mere Town Council would hold little appeal for those who are accustomed to taking money for their service to the public.

But there would certainly be a number of newly-elected Councillors who are not presently active on the political scene. (You know who you are). Social media users will no doubt have little difficulty in imagining who might be expected to stand for office on a putative Scarborough Town Council – and what kind of views and policies would form their respective platforms.

Many of the Borough Council’s recent decisions have met with howling opposition from residents throughout the Borough – and, in particular, residents of Scarborough’s central wards. We need look no further than the demolition of The Futurist Theatre, the Ben MARRIOTT fraud and corruption allegations, the farcical legal errors in the administration of the Controlled Parking Zones, the pollution of Scarborough’s South Bay bathing waters, the Alpamare Waterpark, the appalling treatment of Councillor Michelle DONOHUE-MONCRIEFF in a time of serious illness, and on and on . . . one monumental cock-up after another. No-one in Scarborough has enjoyed seeing their town turned into a laughing stock, especially after the disgraceful cover-up of the SAVILE and JACONELLI outrages.

So some of the names who have come to the fore in the past few months could reasonably be expected to be elected with consummate ease and handsome majorities.

To bring our inspection of this hypothetical Scarborough Town Council to the point, who could doubt that yet another motion of NO CONFIDENCE in the SBC Leadership would be Proposed and Seconded – and carried, probably unanimously?

But all that is some way in the future – if ever. It has no bearing whatsoever on present circumstances. It is a classic red herring. (“I know, Derek; let’s mollify the great unwashed with the promise of a tad more democracy!”).

More to the point, now, is this:

For the moment, their only prospect of reliable representation lies in the hands of the incumbent members of the Opposition Groups at Scarborough Borough Council – comprising Labour (13), Ukip (5), the Greens (2) and a possible 3 of the 5 Independents (i.e. excluding COCKERILL and CHATT, who are generally recognised as Tories in disguise and, in fact, conflicted Portfolio Holders of the Cabinet in which no-one but themselves has even a milligram of confidence).

One might expect someone from the Opposition at the Town Hall to table  a motion of NO CONFIDENCE in BASTIMAN’s well-scraped barrel.

That putative “someone from the Opposition“ can only come from amongst the following leading Councillors:

Or a combination of some (or all) of these.

Three of the four, let it be noted, already serve wards in Scarborough town. Speak up, Councillors – your residents cannot hear you . . .

As Lord Randolph CHURCHILL famously declared, “The duty of an Opposition is to oppose”. If the present Opposition cannot do that, it is time for them to surrender their seats and allow someone with principles and courage to carry the fight.

The people deserve, expect and demand to be represented. The bottom line is this:

They must know that inaction at this of all times is beneath contempt.