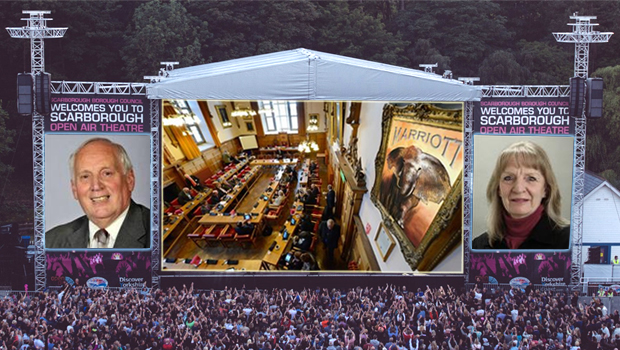 by ALI WILKINS, bringing the 3rd September meeting of SBC Full Council to a wider audience, without losing (or spending) a penny. And presenting that long-running Scarborough farce ‘That’s Not The Way To Do It!’.

I just watched the first meeting of Scarborough Borough Council after the summer recess.

The workings of the Leader are consistent if nothing else.

Having been treated to the bumbling antics of the last two Mayors, we now have ex-Mayor Cllr Martin Smith having a stab at Portfolio Holder for Leisure & Tourism.  I could not help but giggle at his statement on the OAT for the meeting.  Apparently “the lake directly in-front of the stage has been removed and has been replaced with permanent decking”.  The mental picture this statement conjured up posed a few questions.  Like: Where is this section of the lake now? How is it being stored and will it be re-cycled?

Also, due to the sheer weight of this section of the lake, were proper Health & Safety measures taken to ensure that the remaining lake did not encroach or flood the area directly in-front of the stage whilst the decking work was carried out?

Joking aside, I suppose the Leader cannot keep an eye on all his Petfolio Holders at the same time. I know he is capable of removing a theatre but removing a section of a lake – nah!

Bravo! The toilets on Vincent Pier are to have a key code (changed daily) for local schools to be able to use them free of charge. Ta da!  I thought, yes! Something positive! Until the question was raised – would visiting school parties be afforded the same privilege? The response from a smiling Cllr Martin Smith was a resounding NO.

I am sure the need to use a toilet is no different for visiting school children, yet they are being discriminated against. Do we not want them to come here? I would like to remind Cllr Martin Smith that the Tourism aspect of his Portfolio includes “the business of providing services for people on holiday”.  I just cannot believe this attitude towards visiting pupils.

It was good to see the plastics issue raised again to Councillors who were seated, sadly, amidst an array of white plastic cups.  I think the original request from Cllr Vesey for them to avoid using plastic cups, lasted for one meeting. What kind of example is that?

The important issue of the seemingly endless delays with the Multiplex, which is fast turning into a block of flats at every successive planning application, was raised.

As I have said before, why go to all the expense and rigmarole of repeated planning when flats are the end game? The finishing date for this was 2018 – 2019 and is now 2020. The number of flats started at 30. It has now shot up to 75 because the number of screens and restaurants had to be cut.  Now the restaurants are to be cut again. Let’s face it what restaurants would want to open in such a bleak area?

When questioned, the Leader said that the Council owns the land, but issues with the building work have to be taken up with Benchmark!  Are they not partners? Surely the Council can refuse the next planning application and put the site out tender. No doubt there will be reasons for not being able to do this – but I am deuced if I know what they are.

There was also the issue of the Swan Princess, a boat that has graced Peasholm Lake for 35 years. Yes, 35 years without due Health & Safety input, it would seem.

Is there a Park Manager?  I don’t know. But surely whoever is in charge should have all the necessary insurance and H&S certificates in order each year?

When a photo was taken, the Swan was carrying a staggering 17 passengers – a practice which got her even deeper in the water when a member of the public informed the Council that she needed to comply with other fare-paying passenger craft operating in the Harbours. Costs to make her comply are apparently prohibitive (wouldn’t you know?) and the Swan Princess is now deemed ‘tired’ and thus retired. She has allegedly been running at a loss of £8,615.20p over the last 3 years. I wonder how this can be when she has been over-laden, there are no Harbour Dues and very little maintenance expenditure?

I am heartily tired of the slipshod way in which Health & Safety issues are not given due attention, with the recent West Pier issues being a prime example. What gets me is how long is this going to go on – that issues are brought to their attention by the public – are we the only indicators to them when something is seriously wrong?

It was strange that the Portfolio Holder for Finance could not say what agreement we have with Cuffe & Taylor/Live Nation regarding OAT profit sharing.  But she was absolutely clear that there is an agreement for us to pay for maintenance. She did not want to give figures until she could give truthful and accurate accounts. We look forward to them. We were told that all Cllr Helen Mallory had heard was how much people had enjoyed going to the concerts which is supposed to cancel out the £5m (plus-and-ongoing) spent on this venue, for which we have yet to see any profit.

But earlier, weren’t we informed right down to the last penny the losses for the last 3 years for the Swan Princess which people have enjoyed for the last 35 years?