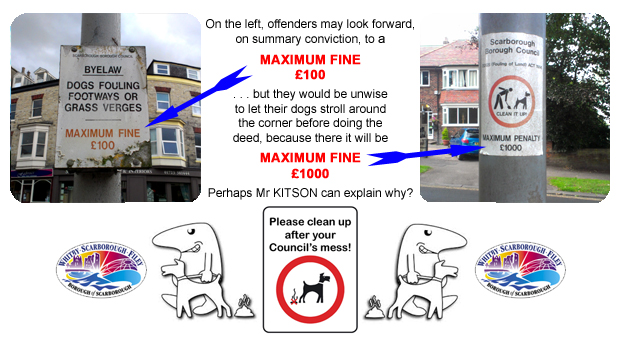 A little over a month ago, on 6th July 2014, I published an article whose title comprised a paraphrased line from the lyrics of one of ABBA’s greatest hits – “Pooper Scooper Schemes Are Gonna Fine Me!”.

The article described the conduct of one of Scarborough Borough Council’s  dog wardens (a Mr Russell CAMM – an ex-Police Officer), and how an innocent member of the public – harangued by an alleged dog-warden (in plain-clothes, would you believe?) – had been intimidated, had his personal data rights violated, and – to add insult to injury – faced prosecution, when no offence had been committed.

As many dog-walkers know, it is the practice and policy of SBC (and no doubt of other local authorities throughout the country) aggressively to explore all avenues in the pursuit of easy revenue. The use of dog-wardens in plain-clothes has been widely criticised in other parts of the country. In Islington, the Council has been forced to put a stop to the practice:

“A TRIAL of plain-clothes dog wardens has been dramatically halted by Islington Council following allegations that they behaved like “secret police.” “

One would imagine that SBC Legal might recognise the folly of pursuing a bogus prosecution with the affair out in the public domain. Not a bit of it. As ever, when anyone complains to SBC – however justified their complaint – the standard SBC bully-boy tactic has been to roll out the big guns of the Legal department, first (in this case) through Mark ROBINSON, then up the monkey-puzzle tree to David KITSON, who has since refused to provide proof of dog-warden Russell CAMM’s identity/authorisation – presumably in an attempt to keep Russell CAMM’s face off this web-site. 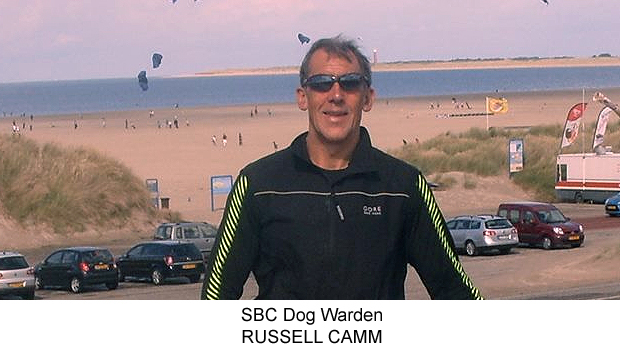 As we now know, the SBC Legal department is not all that hot. In truth, it is not even lukewarm.

In fairness, many Councils’ Legal departments are not much better. For example, City of York Council (CYC) Legal department looks very poor in the light of the ‘Lendal Bridge fiasco’. The Council is now pondering how to refund around £1.2M in fines wrongly levied.

Something analogous appears to have taken place at SBC.

According to signage and stickers all over the Borough of Scarborough, SBC stands on the terms of the Section 3 of the Dogs (Fouling of Land) Act 1996 for its prosecutions:

(1) If a dog defecates at any time on designated land and a person who is in charge of the dog at that time fails to remove the faeces from the land forthwith, that person shall be guilty of an offence unless—

(a) he has a reasonable excuse for failing to do so; or

(b) the owner, occupier or other person or authority having control of the land has consented (generally or specifically) to his failing to do so.

(2) A person who is guilty of an offence under this section shall be liable on summary conviction to a fine not exceeding level 3 on the standard scale. 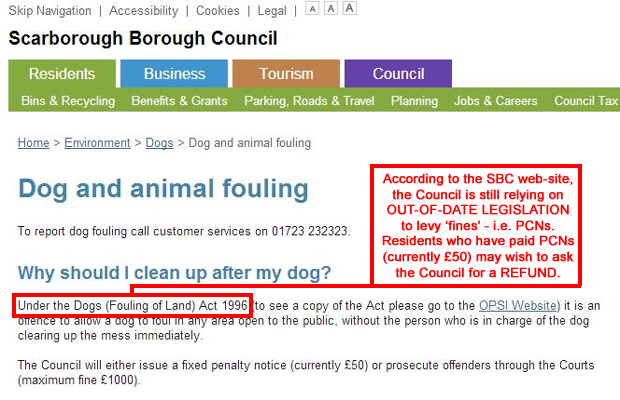 However, it turns out that someone in SBC Legal is aware of the more recent legislation – the Cleaner Neighbourhoods and Environment Act 2005.

We know this because, to SBC Legal’s credit, the the dog-warden victim described in my earlier article faces prosecution under the new 2005 legislation. Somebody has belatedly done some homework.

The 2005 Act is cited elsewhere on the SBC web-site. Unfortunately, the text of the legislation cited there has apparently been copy/pasted from the 1996 Act – and is therefore invalid.

And what SBC Legal would appear to have been unaware of is s.65 of the 2005 Act, which reads:

That means that the whole of Chapter 20 of the 1996 Act – including Pararaph 4, which authorises fixed penalty notices is null and void – the information displayed on both the signage and the SBC web-site is invalid.

Oh, dear (sighs). And they are so sensitive to criticism. 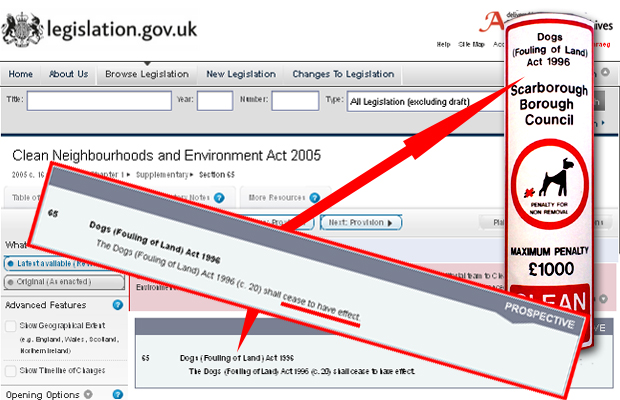 To be clear, no-one is advocating that dog-fouling should go unregulated. It is not in any way acceptable.

But neither is extracting revenue through dog-fouling ‘offences’ in the form of Penalty Charge Notices (PCNs) – summary conviction ‘fines’ – levied under obsolete legislation.

And nor is extracting revenue through parking infractions in the form of PCNs that are not underpinned by law. But that is another story.

In the meantime, SBC has an immediate duty to amend its web-site and remove the offending signage. If the dog-control policy is to be continued, SBC needs to replace it with signage that reflects the true state of affairs. And dog-warden Russell CAMM and his colleaguse will need to start wearing their uniforms.

Other Councils are up-to-speed on this; why not Scarborough? 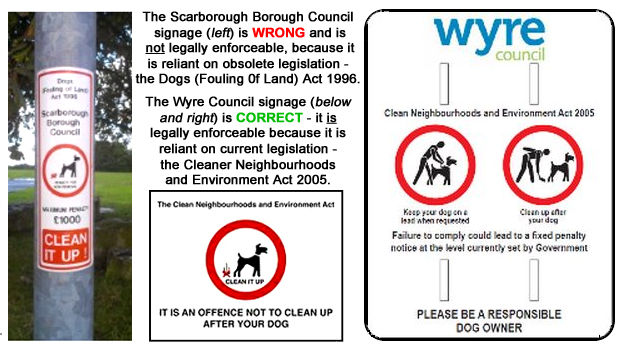 It would be interesting to learn who ‘signed off’ the purchase order for all those useless signs and stickers – and how much of the public purse has been wasted in the process.  Perhaps someone will ask?

Whoever it was, one assumes that before placing a purchase order for the signs, the text was passed along to SBC Legal for approval. It may just as well have been placed in a bottle and thrown into the river at Linton-on-Ouse – and left to float down under the Lendal Bridge. 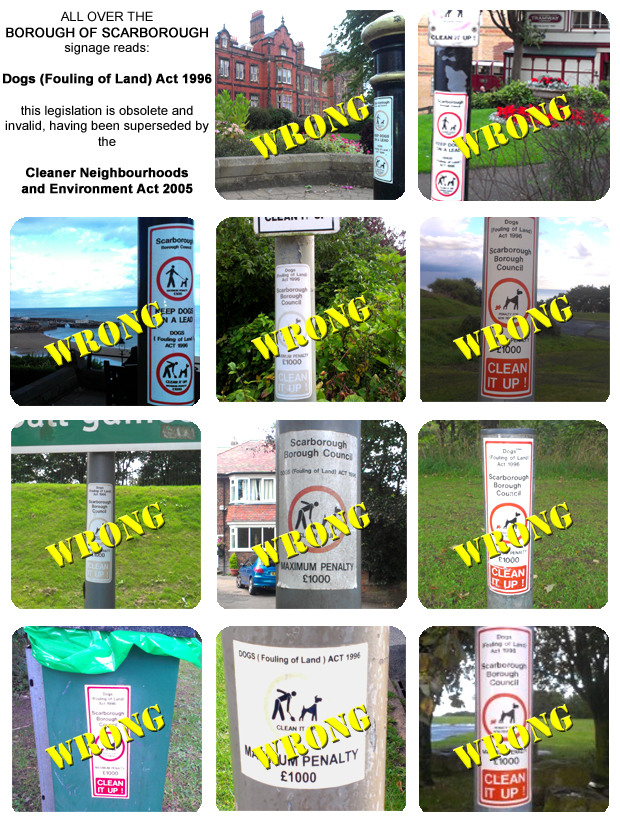