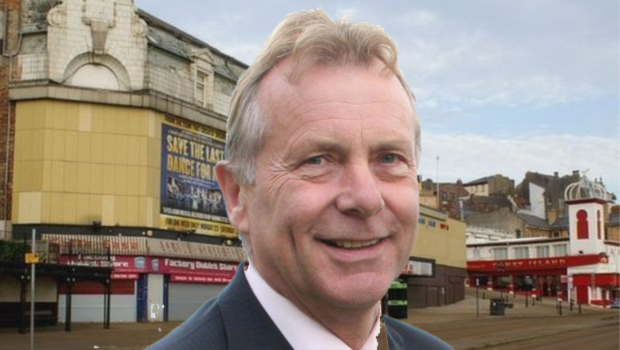 by TIM HICKS, highlighting developments at another Council to which the SBC Leader’s attention is respectfully drawn.

Following publication of my last Open Letter to SBC Leader Councillor Derek Bastiman (Conservative, Scalby Ward) on this topic (here), I very much regret to report that I have received no response to my concerns from Councillor Bastiman.

It is obviously ridiculous to maintain that all contributors to the NYE are intent on causing “distress”, the legal definition of a criminal offence of harassment against SBC Councillors and Council staff. Particularly as several SBC Councillors themselves utilise their right of free speech to criticise SBC in articles published in the NYE.

Yet SBC maintain this fiction, which conveniently:

I believe this policy has been applied to myself and fellow journalist Nigel Ward because we exposed Conservative Councillor and Mayor Peter Jaconelli as a rapist and a child abuser.

This was entirely in the public interest, but nevertheless appears to have brought down the wrath of the Conservative Group on the NYE. I have given Councillor Bastiman the opportunity of commenting on this, and he has refused to comment or deny it.

Clearly, all of this is a misuse of council powers for a Conservative party political purpose.

This is particularly concerning, given that the Conservative Party has a policy of supporting free speech and a free press.

It is only by keeping this issue in the public eye that it will be addressed. Accordingly, I have again written to Councillor Bastiman asking that this policy is reviewed:

Further to my e mail to you of the 7th of August, I am saddened to relate that I have had no response from you.

I understand that most Scarborough Borough Council (SBC) Councillors read the North Yorks Enquirer (NYE), so I am sure you will be aware that my letter has now been published in the NYE: http://NYEnquirer.uk/open-letter-to-cllr-derek-bastiman/

In the introduction to my open letter, the NYE observed that Johnston Press newspapers which publishes the Scarborough News is in an apparently terminal decline and the Whitby Gazette has been reduced to a single staff-member, working from home. This means that de facto the North Yorks Enquirer Internet News Magazine is becoming the main news outlet for Scarborough and Whitby.

Many residents obtain their news on SBC from the NYE and I am happy to say that many residents and SBC Councillors contribute to it. The NYE provides detailed and documented scrutiny of SBC, which is an essential function of a free press in a democratic society. The recent articles in the NYE on safety failings are classic examples of this:

The NYE’s part in exposing Conservative Councillor and Mayor Peter Jaconelli as a rapist and child abuser is another. Whilst this clearly caused annoyance and damage to the reputation of the police and your party locally, it was necessary and entirely in the public interest for Jaconelli to be exposed.

This is entirely lawful and in accordance with Conservative Party policy. It is therefore a source of regret to me that:

This appears to be an act of retaliation by the local Conservative party (which control’s SBC) against the NYE and its contributors, for providing a platform for local people and Councillors to use their right of free speech to lawfully criticise SBC.

Whilst I do not believe that SBC is corrupt. I do assert that for the Councillors of one party, unsupported by any Councillors of any other grouping to designate anyone that criticizes SBC in the NYE as collectively harassing SBC Councillors and Council employees, is an abuse of power.

I also assert that SBC has a duty to interact openly with all local media outlets, even if they criticise SBC.

I would therefore ask that this policy is re-considered independently and that you issue a response to my concerns.

In the interests of openness, accountability and local democracy, I will arrange for any rebuttal of my views or any comment on this that you or any other Councillor wishes to make, to be published in the NYE.

Freelance journalist and contributor to the NYE

I will report back on any response I receive.

This follows a long-running history of refusal by SBC Officers and Conservative Councillors to engage with local internet news magazines Real Whitby and the NYE. This has involved an attempt to close down a local media outlet and threats of prosecution for harassment against NYE journalists over legitimate criticism of SBC policies, Councillors and/or Officers. This has brought SBC into disrepute in the national media. BBC investigation here:

No other Council in the UK has been ridiculed in Private Eye as often as SBC.

SBC Councillors were recently shocked to find out that Council Officers were intercepting their emails.

Conservative Councillors on Wirral Council reacted with fury when they realised that their Council officials were intercepting their emails.

“I think it is outrageous that the council should determine which emails we should receive. I am totally opposed to any censorship this council might want to impose – particularly on elected members. I don’t want my name added to the filter list. It will be my decision about whether I read emails from members of the public”.

“If any member of the public wishes to contact me on any matter at all, I want to see that email. I do not want council managers intercepting emails and deciding which I should see, and which should be kept from me.

It’s really important to me that I hear views – good and bad – about the council. Let’s not forget, it was this kind of secrecy that whistle-blower Martin Morton exposed and which successive council leaders have said would not happen again.”

Writing in the NYE, former SBC Councillor Mike Ward (Independent, Eskdale) has confirmed that SBC Officers have been intercepting Councillors emails since at least 2013 despite assurances he received at the time from SBC solicitors Lisa Dixon and David Kitson that they were not.

Mr Mike Ward believes that his emails were intercepted because he was corresponding with NYE journalist Nigel Ward (no relation) over his tenacious coverage of the Jaconelli and Marriott scandals. Clearly these were serious issues that, as a Councillor, Mike Ward was right to be concerned about. Yet SBC Officers intercepted Councillor Mike Ward’s emails and then used them as a pretext to report him to the SBC Standards Committee.

Harassment of an independent Councillor by SBC Officers to prevent the truth emerging about the Jaconelli and Marriott scandals was obviously disgraceful and contrary to the best interests of the electorate. It appears to have only served the personal interests of some Council Officers and some Conservative Councillors.

Likewise, SBC’s current policy of using the ridiculous presumption that all contributors to the NYE are collectively harassing Councillors and Council staff as a pretext for refusing to respond to FOI requests only results in secrecy and the suppression of media comment. This is at a time when local media in Scarborough is declining.

I am of the opinion that a free and vibrant, informed local media that holds Councillors to account must be in the best interests of the Borough as a whole. Even if the resulting scrutiny of their actions is not in the selfish best interests of Council Officers, particularly any that harass brave and principled whistle-blowers like Ben Marriott.