Guest Author Mike Ward (a former SBC Councillor [Ind.] for six years) writes to share his own experiences of email interception – and breaches of confidentiality – by Senior SBC Officers.

Time for all good men to come to the aid of the people.

I have followed with interest the letters and articles re the interception of Councillors emails.

To my own personal knowledge, Scarborough Borough Council Officers have been intercepting Councillor’s emails for at least 4 years and maybe more.

They appear paranoid about confidentiality and to whom Councillors speak whilst performing their duties. If anyone is deemed vexatious, they do not want any emails of any description being sent.

This is nonsensical. Listening to, and corresponding with everyone means ensuring openness and transparency in a 21st century democratic state.

There is a saying you should keep your friends close and enemies (ill-perceived?) even closer.

SBC’s unwillingness to communicate has served to make many issues worse than they might have been.

A complaint re the interception of emails was first raised in 2013 when I was Independent SBC Councillor for the Eskdale Ward.

At the time, I was assured by Lisa Dixon, David Kitson et al that it was not true.

However, I knew my email account was being ‘hacked’ and the only reason I could see for it was that I did speak to and receive emails from Nigel Ward.

I had met Nigel when I first joined the Council six years before as an Independent Councillor for the West Cliff Ward.

He was (and is) raising a number of serious issues in local government administration across the whole of North Yorkshire (and even further afield) and I was happy to discuss those extremely relevant issues with him and do what I could to help where I believed a wrong had to be righted.

This was most certainly the case in the reported incidents in the Jaconelli case where Council Officers were not replying to the victims of his abuse.

In 2012/13, I was also first alerted to the very serious issues pertaining to what was later known as the Marriott Whistleblower Case.

It was around that time that I knew my emails were being intercepted and I did not have long to wait before it was confirmed.

Real Whitby (now the North Yorks Enquirer) had run a series of articles on benefit claims by a Parish Councillor.

Following that, there was a tit-for-tat allegation made against Nigel Ward.

Nigel had been informed by the DWP that the complaint had come from SBC.

I was copied in on all his emails to SBC when he asked the simple question whether ‘all benefit fraud allegations made to SBC were sent to the DWP’.

He got no reply (WHY?!) but phoned me to say he had been told by a Council employee that all Councillors were getting an answer to his query, mentioning ONLY his case, and saying that ‘all reports of alleged fraud were sent to the DWP’.

I replied to the email from my iPad, blind-copying in Nigel, as it answered his question.

The email, from Lisa Dixon, however was marked as ‘private and confidential’.

Why was it ‘confidential’?

Why couldn’t a simple reply have been sent directly to him by Officers?

David Kitson contacted me to say that I had sent this email to Nigel and I was to be  referred to the Standards Committee by Lisa Dixon for breaching confidentiality!

Obviously, my Council emails were being scrutinized.

But what makes an email confidential?

Does simple writing confidential enforce this?

Does any email require the reasons for confidentiality clearly stated?

Does so much information need to be confidential anyway?

Surely, if confidentiality is to be upheld, it must also apply to Officers?

Within SBC, there does seem to be rules for one and not the other.

Whilst my Standards issue was progressing, I was Chair of the Car User Allowance Working Group which was considering the car users allowances for Officers.

This was highly controversial and the initial findings/considerations were most certainly ‘confidential’, as not all Officers had yet been interviewed.

One very senior Officer had said to the Committee that “you will remove this Allowance over my dead body”. It must be difficult, if you get a salary running into tens of thousands, to face a ‘pay cut’ that might come to a few hundred pounds!

Work in progress by the Car User Allowance Working Group was stored in a ‘Personnel Confidential’ file.

Monitoring Officer Lisa Dixon, however, asked the Personnel Officer to send the draft report to her. Because of reporting lines, the Officer felt obliged to reply – but, in the knowledge that her actions could have been questioned because it came from a ‘confidential’ file, she later deleted her email.

The ‘confidential’ work in progress was then circulated by Lisa (who herself could have had the right to see it) to the Directors Team (who certainly did not) – though one of those at that time, Hilary Jones, reported to the Working Group she had not opened it – knowing it to be ‘confidential’.

Errors of judgement, mistakes or misunderstandings do happen, even by Officers.

This case, and the example above, show Officers and Councillors are all fallible to misunderstandings and mistakes.

But why can’t any mistakes just be admitted –  even an apology offered – and lessons truly learned?

Why SBC can’t reply direct to a member of the public in answer to simple questions is beyond me.

The Monitoring Officer from NYCC, Barry Kahn, had had a perfectly reasonable and amicable 2-hour meeting with Nigel Ward to discuss issues of concern, so why can’t SBC? Communication was and is so important.

What are Officers, our public servants, so afraid of?

Why are they still resorting to the interception of emails?

There can never be a justification for this.

This practice, which has also been highlighted in the national media (see below), must stop NOW.

Maybe the only way is for Councillors to set-up personal email addresses for residents’ use only, outside of the Council’s purview.

They then can determine which person (if any) they want to block, which email to open and which emails to reply to – without any interception by prying eyes.

Many Councillors now do this already  and many have also realised that open communication with ALL residents is the best way forward.

If you have nothing to hide, there is never anything to fear. 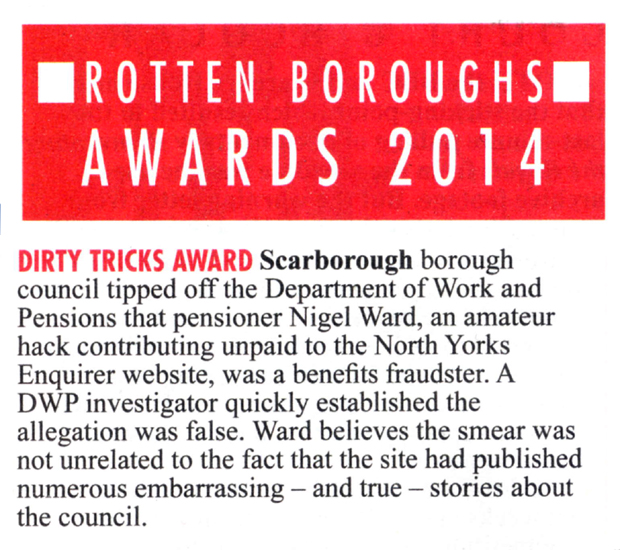 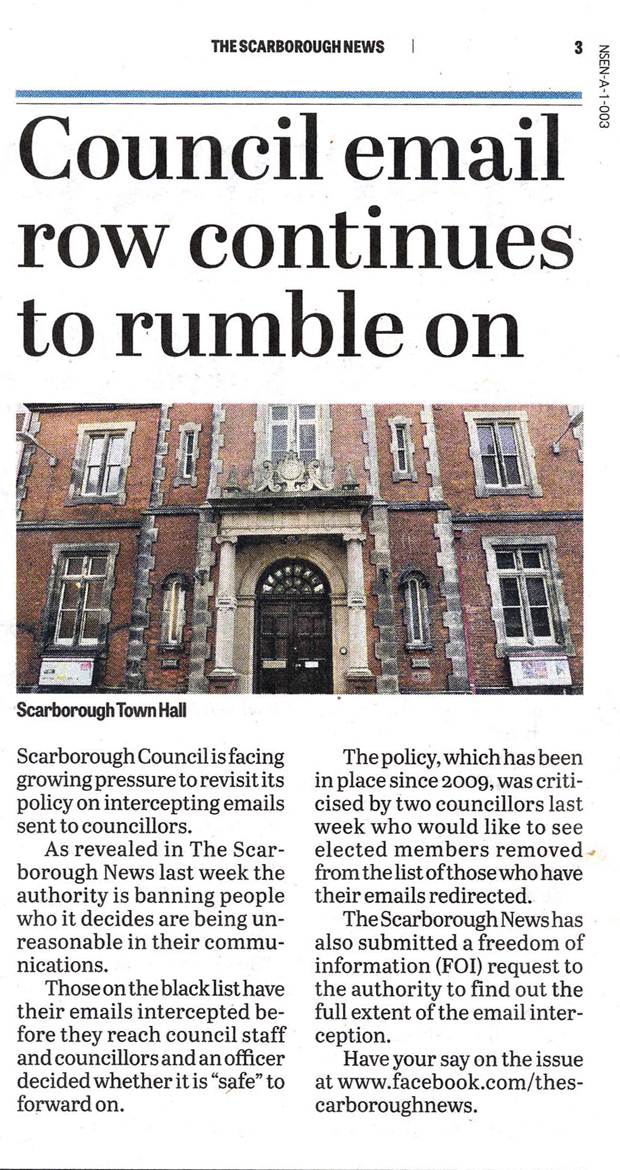