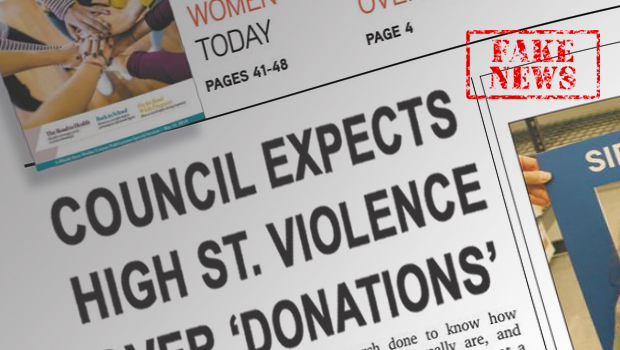 Regular readers will recall that the Enquirer has published a number of articles and letters (some from Councillors) raising questions as to the legitimacy of the Yorkshire Coast DBID. These articles can be readily located via this link.

Pending a future detailed report on the many unresolved issues besetting the DBID, I offer the following example of the extremes of secrecy pursued by the Council, shielding from the public eye its own predetermined involvement, by one of the most absurd applications of the exemption clauses in the Freedom of Information Act 2000 that I have yet encountered – and JMD knows I have seen a good many.

But allow me to digress, momentarily, to remind readers how we were assured, in writing and in Council, that the extent of the Council’s financial commitment to the DBID/Mosaic was a mere £15K contribution, funding a ‘feasibility study’. It then transpired (through inspection of the Council’s own Open Data webpage) that £88,248.29 had been paid to Mosaic.

It is curious, to say the least, that, in a recent FOIA response, the Council has now ‘adjusted’ the figures, as follows:

Other figures disclosed under the FOIA are also of interest – monies collected by Scarborough Borough Council, on behalf of Mosaic: 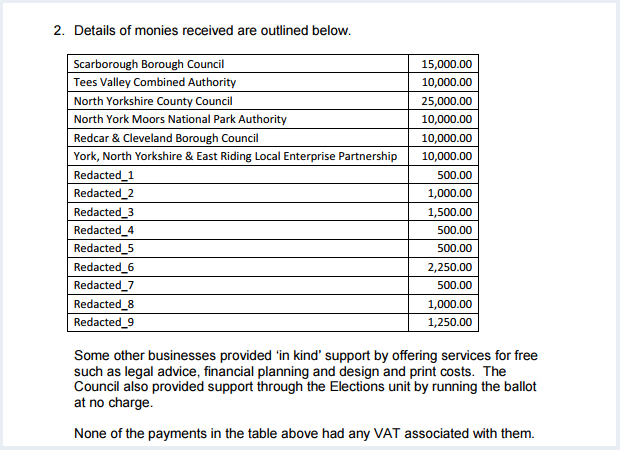 Six public authorities (all precepted beneficiaries of Council Tax) stumped up, between them, a total of £80,000 of our money.

That £10K from Redcar & Cleveland Borough Council elevated my eyebrow; R&CBC pulled out almost a year ago. Our new Chief Executive came from R&CBC and must presumably be well aware of the grounds for his former Council’s outright rejection of the DBID. But what is £10K amongst friends, especially when it is someone else’s £10K – i.e. the Redcar & Cleveland ratepayers?

Nine contributors (identities redacted) contributed a total of a further £9,000 to the DBID – plus some unspecified contributions ‘in kind’ – the kind of stuff that real-world private-sector businesses have to pay real cash for. These ‘in kind’ donations include office space and support services from Marks & Spencers (estimated value of £12.5K) and printing and design services from Adverset.

And SBC generously chucked in a further £6,500-worth of waived electoral services to run the ballot. (Gosh! Two little typos and that could have read “to rig the ballot”. Thank heavens I got that right!). Nobody mentioned a free ballot when the Council was obstinately sticking to its £15K “all in” story.

But what makes the SBC FOI Officer’s redactions all the more secretive is the fact that the following contributions are already in the public domain, courtesy of W2Y! SBC cannot even keep a secret that is no secret at all. 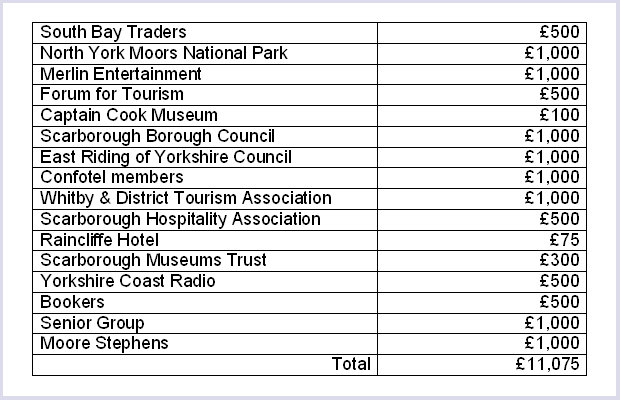 The title of this article – “DBID: SBC Claims Civil Unrest on the Cards” – is, of course, facetious. However – as I am about to demonstrate – the real facetiousness actually resides in the most telling item amongst the FOIA responses, which was the following implausible invocation of s.38(1)(a) of the Act, thusly evading disclosure of the identities of those amongst the faithful who have chucked money into the pot to get the Yorkshire Coast DBID off the ground:

The Council would have us believe and accept that disclosure of the identities of those nine charitable ‘benefactors’ (one or more of whom may, or may not, have a disclosable pecuniary or personal and prejudicial interest in the DBID) carries a credible risk of causing violence to erupt on the High Streets of the Yorkshire Coast.

For the benefit of our family readership, I say “Poppycock!”.

And the author of this absurd claim has apparently not realised that she/he is simultaneously asserting that the Council has actively supported the DBID, both financially and in free services, in the foreknowledge that it would be divisive in such degree as to risk splitting our communities to the extent of “physical harm” ensuing!

What sort of a FOIA Officer could seriously expect us to believe that being “open and transparent” about who is propping up the DBID could possibly risk bringing ‘The Troubles’ to the Yorkshire Coast? A stooge under orders – or a clown under the influence?  You tell me.

I would certainly like to see the Risk Assessment Matrix for that assertion. Comic book stuff. The decision process for invoking this particular exemption to disclosure looks like this: 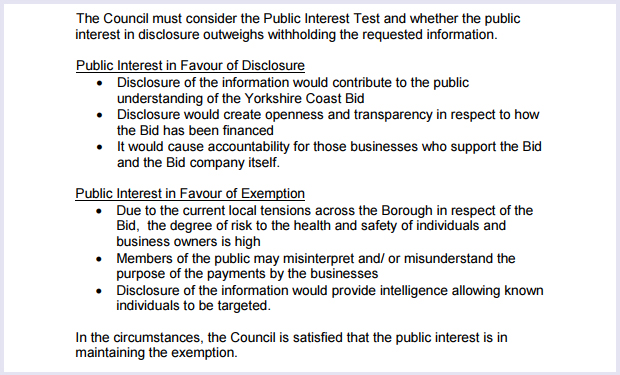 The three bullet points in favour of disclosure are valid enough. Public authorities and private enterprise businesses have clubbed together to implement a mandatory 1.5% levy on ‘tourism related’ businesses whose non-domestic business rates exceed the £12K threshold. Ratepayers have every business seeking answers as to who is driving this extra layer of taxation – and for what purposes. Might there be an element of self-interest? Might those ‘donations’ amount to nothing other than an investment against future returns? In the interests of “openness and transparency”, the case in favour of disclosure is overwhelming.

But the three bullet points against disclosure are without any evidential basis.

Nevertheless, “the Council is satisfied . . .” that those three bullet points justify secrecy.

Of course, fatuous as this ‘risk of gang wars’ argument is, it could also be read as casting a seed of animosity where, until now, no animosity exists. That is not comic book stuff. It is rabble-rousing. It is ‘divide and rule’. It typifies all that is blameworthy in this Council’s Officers; arrogance; wilfulness; deceit.

On a happier note, I have written to our new Chief Executive, Mike GREENE, on the day of his first meeting of Full Council (16th September 2019), welcoming him to our Borough:

Good morning – and welcome to the Borough of Scarborough.

I look forward to making your acquaintance; I believe we may share aspirations.

Meanwhile, may I respectfully refer you to:  https://tinyurl.com/yx9vsqat

The aspirations to which I refer are, of course, directed towards restoring SBC to an acceptable standard; fit-for-purpose, value-for-money, honest, compassionate and fair.

Mike (or Sharon) has read my email but has not yet found time to respond. So I continue to look forward to making Mike’s acquaintance. I accept that this may take some time. Perhaps by then the penny may have dropped – into the poisoned chalice . . .