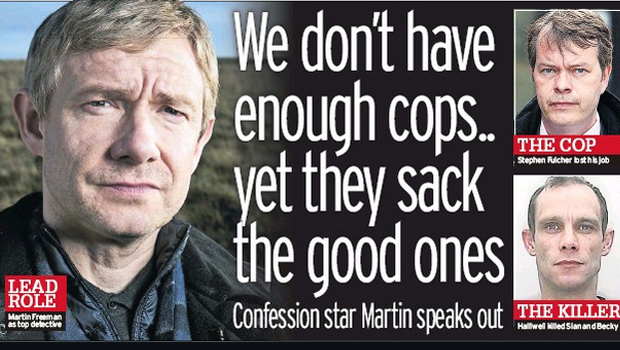 The NYE has for some time been running a series of articles by the authors on the murders committed by Serial Killer Christopher John Halliwell that he has not been convicted of. This has been a major investigation, which is still on-going. We are grateful to the NYE for supporting us in this task.

Halliwell was convicted of the murders of Becky Godden-Edwards aged 20 in 2003 and Sian O’Callaghan aged 22 in 2011, in Swindon. However, the true extent of his crimes has never been revealed, despite the relentless efforts by Detective Superintendent Stephen Fulcher, -the officer that destroyed his career, finances and health to ensure Halliwell was arrested and jailed for a full life term- to have this aspect of his offending resolved. The full horror of the injustice Detective Superintendent Fulcher suffered is told very well in this Daily Mail article, and in Fulcher’s book “Catching a Serial Killer”, NYE review here; which should be required reading for all police officers aspiring to a senior CID role.

The NYE is the only media organisation that has conducted an in depth ongoing investigation into Halliwell. Links to our articles are below, after the appeal. As a result it has developed a specialist following of police officers and readers interested in Cold Case investigations.

The authors have also received a letter of commendation from Detective Superintendent Dai Malyn of North Yorkshire Police for their work on the Claudia Lawrence investigation:

‘Many thanks for your continued interest in this case and your research into outstanding lines of enquiry and the effort you put in. None of your information is ignored and for your information the team are satisfied with the vehicle you provided details of on Google earth and we have also linked in closely with the Haliwell incident room.

As a result of the TV Series ‘A Confession’, (NYE article here) public awareness has been raised and a new witness has come forward. This has resulted in the national and regional media running articles that Halliwell obviously had more than two victims. A cause that the NYE has consistently argued since June 2016. Please see these excellent articles from the Daily Mail, Daily Mirror and Swindon Advertiser.

These articles raise the possibility that Halliwell also murdered:

It is good to see other media outlets following the NYE and raising the issue of the failed antecedent investigation into Christopher Halliwell. This all raises the profile of the cases and encourages more witnesses to come forward.

It also raises another issue. Antecedent investigations are important because they give victim’s friends and relatives’ closure, and prevent innocent men from being convicted of crimes that were committed by someone else. However, because the police will not expend resources investigating and resolving cold cases when the most likely murderer is in jail for a full life term, it is therefore left to journalists to try and progress these cases.

Chris’s work indicates that Halliwell should be considered as a suspect in thirty murders and disappearances as shown in Table 1, here:

This includes murders in the North Yorkshire area. The authors believe that Halliwell is a strong suspect for the murder of Claudia Lawrence. His father reportedly lived in Huddersfield and the York area in Ampleforth or Oswaldkirk and we have had a sighting report of him in Scarborough. We also believe he is a strong suspect for the murders of Donna Keogh, Vicki Glass and Rachel Wilson in Middlesbrough. NYE article here.

As usual, the authors would like to finish this letter with an appeal for information.