I am sure you are aware that a great deal of correspondence crosses my desk, much of it redundant; some of it, however, manifests its relevance only at a later date.

Revisiting your email to a member of the public of Friday, 8th February 2019, I was struck by your uninhibited expression of scepticism regarding the Yorkshire Coast DBID. Your characterisation of the presentation given to Councillors was one of unmitigated negativity. On the positive side, you held yourself forth as the sole champion of business proprietors who had very publicly stated their opposition to the DBID. Your email was open, transparent and forthright; in fact, commendable.

I remind you of your words;

I too have many reservations regarding the DBID process and am not convinced of its benefits for the average business in the Borough.

I will certainly look again at the points you raise and intend to ask more questions. I was absolutely unimpressed by the presentation given to councillors by the DBID Chair and Chief Officer. However, I seemed to be the only one asking awkward questions and they didn’t like it.

I am not available for the meeting next week but would welcome any further information that comes out of that meeting.

Leader of the Labour Group

Regrettably, I am now struggling to discern any evidence of diligent pursuit on your part of your declared intentions during the months following your email.

Perhaps you will do me the kindness of explaining, in the public interest, what powers of persuasion led you, following your election, to perform a complete volte face in regard to the DBID? 180-degree U-turn?

To the uninitiated observer, the appearance is that your declared practice and intention to “ask awkward questions” about the DBID must have ground to a halt and has, indeed, reversed direction since your accession to the Leadership – at least according to your Portfolio Holder Councillor Liz COLLING’s uncompromising assertions.

Your coalition colleague, Councillor Michelle DONOHUE-MONCRIEFF [Ind.] recently published, in the North Yorks Enquirer – the only local news outlet informing the public (and Councillors) about local government events in fine detail – a reasoned and balanced critique of the DBID affair in which she quoted from Council Minutes:

I have been attempting – without success – to reconcile that extract with a recent statement provided to Yorkshire Coast Radio by an unidentified “spokesperson” for Scarborough Borough Council:

“We would like to emphasise that Cllr Colling made our position clear at last month’s Full Council meeting. It is mandatory, under the 2004 BID regulations, for us to collect the levies on behalf of the Yorkshire Coast BID company. We have nothing further to add.”

Or will the tail wag the dog back under the table like a whipped cur? Is it a ‘done deal’?

The only alternative perspective is that it has been inevitable, since 2004, that a leach would sooner or later attach itself to the body corporate and nothing those who ‘must’ pay the levy could say or do would ever reverse it. This is utterly undemocratic and perilously close to taxation without representation – a fine injustice for a Labour Councillor to uphold.

Before us stands a difficult, but not intractable, problem:

How can the Council operate (as it always must) within the constraints of statute – and at the same time honour the duty of all elected members to represent their electors?

On 4th July 2019, I emailed your Director of Finance and s.151. Officer Mr Nick EDWARDS suggesting an ‘exit strategy’ for these seemingly irrec0ncileable opposites. Mr EDWARDS read my email but lacked the common courtesy to offer me an acknowledgment or response. Plus ça change . . .

The thrust of my suggestion is best explained by a hypothetical example.

Let us say that Mr X is the proprietor of a small business in the tourism sector, in Whitby, whose non-domestic business rates (NDBR) amount to £15K per annum.

This exceeds the £12K threshold for the DBID levy by £3K; ergo, Mr X may expect to be invoiced for a levy of 1.5% or £225. (Although why the levy is imposed on the whole amount – and not merely on the amount by which the threshold was exceeded – is by no means clear to those who pay Income Tax on that basis).

£225 is not a ‘deal breaker’, one might think, in the greater scheme of a year’s trading, even for a small business.

However, as I am sure you are aware, this levy has become a matter of principle not without its parallels to the infamous THATCHER Poll Tax. Even on ‘purely’ financial grounds, our hypotheical Mr X may feel that if he really must spend £225 on ‘enhancing the tourism offer’, he does prefer to trust his own judgement on how best to achieve maximum cost-effectiveness far more than he trusts a bunch of self-appointed pole-climbers who will slice 20% off the top before re-branding any A-roads. Our hypothetical Mr X may have a point.

Under s.13a of each of a succession of Local Government Finance Acts, the Council, as Billing Authority, is granted discretionary powers to reduce the Council Tax of any give ratepayer to such extent as it thinks fit, including a reduction all the way down to zero. Council’s routinely practice these discretionary reductions to assist start-ups and small businesses in deprived areas and/or times of hardship and austerity.

But let us not be greedy. Clearly, this Council is empowered to reduce Mr X’s Council Tax or NDBR by an amount equal to the levy – in this hypothetical case, £225.

This would set the Council at a loss for every levy payer in the Borough. A loss in cash.

There is more to life than cash. There is fairness. There is the common good.

It has been argued that the £22M Argos loan to establish a £7.5M structure (a loss of £14.5M) facilitates, at least theoretically, ‘greater’ benefits peripheral to the structure itself (i.e. the ‘regeneration’ of the town (not the Borough), entailing;

In the same way, this suggested NDBR/Levy ‘compromise’ would herald;

The satisfaction of the populace holds a value far beyond the measure of mere filthy lucre, Steve. Many a champagne socialist has told me this and I believe it to be true. Many would argue that blowing half a million on the Council’s reputational rehabilitation is cheap at the price.

Incidentally, it may interest you to know that I have conducted email correspondence with the Project Manager of the Yorkshire Coast DBID. Having been assured that the Council’s total commitment to the DBID was ‘only’ £15K (to finance a ‘feasibility study’), Enquirer readers must have been shocked to discover payments totalling over £88K on the Council’s Open Data page (see below) so I was attempting to establish whence the Project Manager’s salary derived. Was it paid by the public purse?

At the third attempt, the nearest the Yorkshire Coast DBID Project Manager could approach to an “open and transparent” answer was this classic one-liner:

Shifty is as shifty does.

But, let me ask you the very same question, Steve:

Not only can I not obtain a straight answer, but I have reason to believe that my correspondence (and data) may have been unlawfully processed. So I have submitted a Subject Access Request to the Mosaic Partnership in the following terms:

I shall be unsurprised if other members of the public follow suit.

I shall, of course,  keep you informed when I receive a response,  about the degree of “openness and transparency” I encounter.

I want the best Council I can get, Steve. This is not it.

I will continue to work to improve it and you are free to work with me or against me in that endeavour, as you see fit.

I bid you good day, 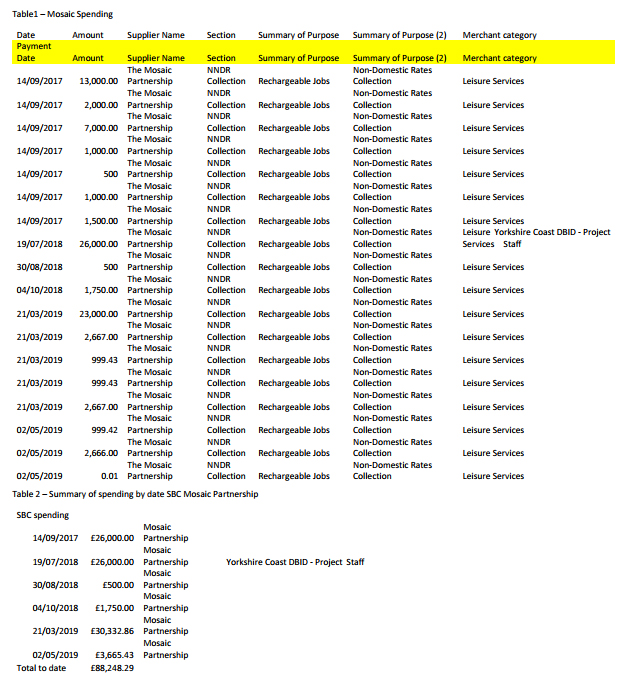 What do readers think those £26K payments for Yorkshire Coast DBID Project Staff signify? Is every Council Tax payer in the Borough subsidising this disgraceful stealth tax? 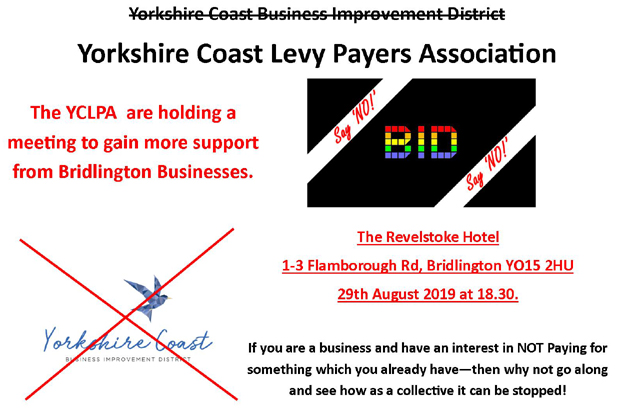