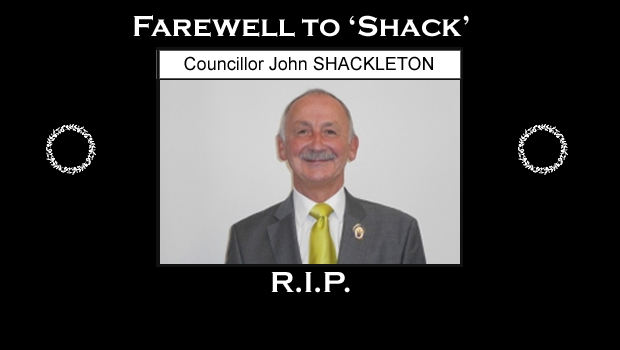 I have been asked to present, to the North Yorks Enquirer and its readers, the following eulogy to recently and unexpectedly deceased Councillor John SHACKLETON (‘Shack’ to his friends, amongst whom I hope to be counted) of Filey Town Council, by his long-time friend and colleague Councillor John HAXBY.

I have known Shack for about five or six years. I knew him has an honest man and a gentleman, a diligent Councillor and, for three incomparable years of service, an exemplary Chair/Mayor of his Council’s meetings, whose light touch and open-mindedness made his meetings a joy to attend. I deeply regret his passing and offer my condolences to all who will miss him. Good bye, Shack.

What can I say about John. I have found it very difficult to find the right words. A truly great friend, colleague and Town Councillor. John came to Filey in 2004, with his wife Sue, to retire after a lifetime of being a butcher in Halifax, eventually owning his own business prior to retiring.

After settling here he quickly began to integrate himself into the local community. He soon adopted Filey as his home town, and Filey adopted him. So interested was he in the town and its running, that in October 2010 he became a Town Councillor.

Such was the popularity of John, that after only a couple of years on the Council, he was elected to be Deputy Town Mayor in 2012. And for  three consecutive years, 2013 – 2016, he became Town Mayor. Whilst not unprecedented, this was a very great achievement, and bears testament to how well liked and respected John had become within Filey and the Town Council.

I can never recall him having a bad word for anyone. He may have disagreed many times with people, but always respected their views, whether he agreed with them or not. One of his favourite sayings was ‘He’s better for knowing’. Everyone I have spoken to, since John’s passing, has commented on what a kind, humble and honourable man he was.

At times, John and I were accused of collusion on certain matters of debate. I can categorically refute this. He had his opinions and I had mine. It just so happened that we shared many views, opinions, ideals and ethos, and  shared the same desires for the youth and residents of Filey. Yes, we occasionally disagreed but still respected each other’s opinions. It just so happened that we agreed on many, many matters. To believe he could be swayed by my opinions, and vice versa, is ridiculous.

In his time as a Town Councillor he has sat on many committees, and I won’t list them all tonight, but will say he was a conscientious member of all of them and very rarely, if ever, missed a meeting. I will certainly miss that phone call saying ‘Hey Up Matey, will pick you up at ‘alf past six to quart to seven’.

Yes, he was proud of his West Riding heritage and was the brunt of many of my jokes and jibes about ‘Wessies’. He took it all in good heart and gave as good as he got. Neither of us being offended in the slightest.

Tribute must be paid to John’s wife Sue, who ably supported John in his role as Mayor, who has also become a well loved member of the Filey Community, and a great ambassador for the town. His son, Lee and wife Jane, his daughter Lisa and partner James, and grandchildren Henry, Ruby and Josh . My deepest sympathies go out to all of them.

Rugby League was John’s passion and he attended many of the local matches in which my son used to play, his son Lee is a youth coach in Halifax, and the whole family has rugby league at their core.

His passing away has left a massive hole in my heart, and to have this empty seat next to me is unbearable, but he has also left a great hole in this Council which will take some filling, if ever, and an even bigger hole in the community of Filey.

One day we’ll meet again for another debate and discussion on Filey matters. Until then, goodbye and Godbless John.