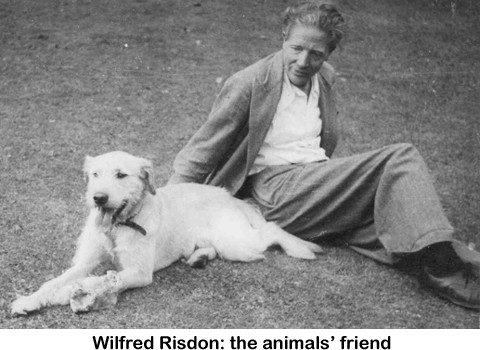 A Letter to the Editor from Jon RISDON, of Sleights, announcing the publication of his biography of Wilfred RISDON – “Black Shirt and Smoking Beagles” – and the launch of his web-site.

Dear Editor,
in view of the campaigning nature of your site [for which congratulations are in order], I think some of your readers might be interested to learn of a biography I have published recently, the subject of which is my grand uncle, Wilfred Risdon. I think readers would be interested for several reasons; the book covers a very turbulent, but nonetheless interesting period of the twentieth century, up to ‘the swinging sixties’. Wilfred Risdon was passionately committed to the sanctity of life, both for human beings and animals, and to educating people about how they are manipulated by corrupt politicians and avaricious bankers and businessmen. In so doing, he became involved with some influential but also, inevitably, controversial figures, including Sir Oswald Mosley, but the book, Black Shirt and Smoking Beagles, cuts through the media lies and misinformation, to present the truest possible picture of the struggles to free people from financial slavery, and perhaps more significantly, to prevent Britain becoming embroiled in the horror of another calamitous world war in 1939. During the previous war, he eschewed a combat role, in favour of preserving life as a member of the Royal Army Medical Corps.
The second part of the title refers to Wilfred Risdon’s tireless campaigning, from 1939 until his death in 1967, on behalf of animals, to rid the world of the scourge of animal testing; a fight that, sadly, one man alone could not hope to win, but he could hope to, and did, make a significant contribution, including taking the organisation that he led, the National Anti-Vivisection Society, into the heart of the medical fraternity, Harley Street, in 1964. In the course of this work he encountered, and became friends with another major figure in twentieth century events, Air Chief Marshal Lord Hugh Dowding, who was also committed to the abolition of animal testing.
Lovers of biographies that include politics, an inescapable element of life, shot through with a humanitarian theme, and the occasional ‘big name’ [I hesitate to use the word celebrity!] thrown in for good measure, should find this book a fascinating read. It is available direct from the publisher’s website, http://www.wilfredbooks.co.uk/, and for over 700 pages is excellent value at £15 plus p&p for the print version, or only £5 for a PDF e-book version.
Thank you for giving me this opportunity to bring my project to your readers’ attention.
Regards, etc.
Jon