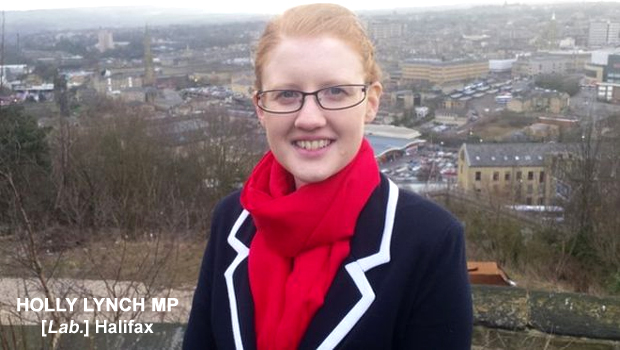 Today’s Letter to the Editor is from Robert FEATHER of Halifax, who has kindly offered to share with readers the following letter to his local MP, Holly LYNCH [Lab.] (a vocal critic of the Department for Transport, pictured above), expressing his views on the subject matter of two recent articles:

Incidentally, within the latter article, broadcaster Charles LOFT’s email to the Chief Constable was quoted in full. Unsurprisingly, he too received the stock response from West Yorkshire Police – indicating that his eloquent appeal received no fresh consideration whatsoever from the Chief Constable. Charles has responded in forthright terms:

“Never mind your intention at the time. You’re all Judas’s after your 30 pieces of silver. You acted illegally at the time and though you finally do admit that you collected the money on false pretences you refuse to reimburse money to the people you acted illegally against. So much for British fairness and proper honest justice, but who could expect differently from Tory ‘coppers’ with NO morals. . . . . “

These sentiments have been repeated hundreds of times, though often in less temperate language, throughout the social-media sphere.

I am concerned by a news item I read today, regarding the fines illegally imposed by West Yorkshire Police, against 16,000 residents, totalling approximately £485,000.

The news item can be found on the following link, at the North Yorkshire Enquirer: http://nyenquirer.uk/west-yorks-police-fpn-amnesty/

This in itself, would be cause for concern, but the concern is compounded by the response recorded from the West Yorkshire Police Chief Inspector, Lisa Atkinson, which appears to accept no responsibility for any incorrect action, and puts the blame on the shoulders of the citizens her officers wrongly penalised.

Her attitude is that it is the fault of the public, for not fact-checking police officers, when informed they had committed an offence, and/or when told of the fine for doing so.

I am not one of the 16,000 citizens forced to pay one of these illegal fines, which should hopefully prove that this concern is not driven by any expectation of personal financial gain, but by the worrying implications of the Chief Inspector’s statement.

The Chief Inspector is effectively saying that she does not consider they WY Police have any responsibility to act within the law.

The time allowed to benefit from the lower fine does not allow much time for the accused to seek legal advice, or investigate the history of the legislation, yet the Chief Inspector is claiming that members of the public, harassed into paying this amount, under duress of escalating costs, have forfeited their right to retrospectively challenge the incorrectly-charged penalties, once they do find the time to check their validity.

West Yorkshire’s Chief Inspector tells us that she intends to capitalise on that trust, her statements imply that she considers the public to be gullible idiots, who deserve to be fleeced. She reveals that she believes that if members of the public don’t know the law well enough to challenge the bogus demands her officers make, that’s their fault.

The implications of this admission by the Chief Inspector are obvious.

It destroys the bond of trust essential to effective rule of law and order.

From now on, according to the Chief Inspector herself, all citizens of West Yorkshire should be advised to challenge every statement or request by any of the WYP, demand to be told the exact legal code behind every alleged offence, and that they will comply when that has been verified by an independent fact-checking source.

There is no way the force can cope with the level of civil disobedience the Chief Inspector demands the public need to start using, and police effectiveness will suffer as a result of the cynicism and mistrust she creates.

How much cheaper would it have been to do the right thing first time?

I respectfully ask that you consider if there is anything you are able to do as one of the local MPs in West Yorkshire, to bring this issue up with the Chief Inspector, or to raise the issue in the House, because this is an issue not confined to just West Yorkshire alone, but appears to have happened across all national forces, and the implications for a breakdown in civic trust are serious.