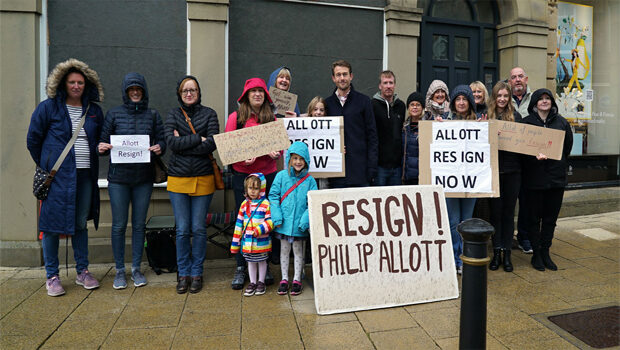 The Police, Fire & Crime Commissioner (PFCC) for North Yorkshire, Philip Allott, is now the subject of a storm of controversy because the day after former Police Constable Wayne Couzens was convicted of the murder of Sarah Everard he stated in an interview:

PFCC Allott has subsequently retracted his remarks and apologised unreservedly for them. I asked PFCC Allott for a comment on this controversy and it is reproduced below – from his Press Officer:

As you are aware, you remain subject to a Customer Contact strategy and in line with that arrangement, ordinarily your correspondence would be the subject of an individual response.

You will also be aware that it is our consistent position that the NY Enquirer is not treated as a recognised media outlet and therefore, we would not ordinarily respond to a request for a ‘media comment’ from you either.

However, Commissioner Allott recognises the current level of public interest and concern in the topic you raise in your email.

By way of response, he has asked me to draw your attention to his public statement at https://www.northyorkshire-pfcc.gov.uk/news/statement-from-philip-allott/ and to his open letter published with the agenda papers for the Police, Fire and Crime Panel meeting on 14 October 2021 at https://edemocracy.northyorks.gov.uk/ieListDocuments.aspx?CId=1159&MId=4727&Ver=4”

Leaving aside PFCC Allott’s contradictory and hypocritical policy of ignoring media enquiries from the NYE because he does not recognise it as a media outlet unless it is covering an issue of “public interest and concern” (Allott speak for “I need to get my defence out, because I am in big trouble. So I will temporarily suspend my policy of supressing any journalist that criticises me or the police, to save my own skin”. Editor)

Should Philip Allott have Resigned?

I can remember no act by any Police, Fire & Crime Commissioner that has raised such enormous public revulsion as Commissioner Allott’s bizarre comments on the murder of Sarah Everard. Commissioner Allott must now be the most well-known Conservative politician in the UK, after Boris Johnson and Priti Patel.

Since he has been appointed as PFCC in May, I have been impressed with PFCC Allott’s commitment to the role and more inclusive approach. He is light-years ahead of his predecessor Mrs Julia Mulligan, who had an unsavoury reputation for bullying. However, in my view he should have resigned. My reasoning is as follows:

To quote former Police Officer and Independent candidate at the PFCC election in May, Mr Keith Tordoff MBE:

The Labour Party candidate at the May PFCC election, Mrs Alison Hume, said:

“Women have lost faith in the police. The vast majority of survivors of sexual violence and assault never report to police, and it’s not hard to understand why. The charge rate for domestic abuse related crime in North Yorkshire in 2019-20 was just 4%, compared to 9% in England and Wales as a whole.

Mr Allott already had a huge job on his hands when he was elected, and it is clear from today that he simply isn’t up to it. Violence against women and girls is at epidemic proportions in York and North Yorkshire.

How can Mr Allott hold the police force to account on our behalf with views which suggest women are somehow responsible for what happens to us at the hands of violent men? His hurried apology is simply not enough. I call on Philip Allott to resign with immediate effect.”

A petition calling for PFCC Allott’s resignation can be accessed here.

Commissioner Allott’s justification for not resigning

Commissioner Allott has stated forthrightly that he will not resign. Quoted by the BBC he said:

“No I will not [resign], because it’s more important that I carry through the mandate I was elected to do and I have to say I have thought about it, I’ve gone back and I’ve reflected on my position.

About 10,000 people have signed a petition calling on him to do resign. Commenting on this, Commissioner Allott said:

We have to see it in context, 83,000 people voted for me in North Yorkshire and York – that’s more than any Member of Parliament.”

Whilst 83,000 people did vote for Commissioner Allott in the May 2021 election, that was on the second preference vote. We should not forget that in the first preference vote he got 73,657 votes with 82,914 voting against him for the other candidates.

His predecessor as Police, Fire & Crime Commissioner for North Yorkshire, Mrs Julia Mulliga,n has – unusually for a senior Conservative politician – broken ranks and severely criticised Commissioner Allott. She is quoted in the Yorkshire Post as saying that women will never believe Philip Allott again:

“Philip Allott’s words reveal a total absence of understanding of male violence against women and girls.

That is bad enough. But let us also not forget that York was Sarah’s hometown. Her family were mourning her with some of the most compelling victim statements I have ever read. They may have been listening to that interview, they may have heard what he said.

I suspect that most women in North Yorkshire are sickened by his comments and would not now vote for him. Further, the degree of criticism he has had from across the political spectrum by the elected politicians quoted above reflects public opinion nationally that he should go.

Put simply he has lost his mandate. I have no doubt that if the election was run again, he would be defeated.

Should Commissioner Allott be sacked?

In my view, it should do so.

However, the largest single group on the panel is the Conservatives. In the past when faced with very serious misconduct by a Commissioner, (the bullying allegations against Conservative PFCC Julia Mulligan), the panel failed to remove the Commissioner.

I could be wrong, but I suspect it will take the same line with Commissioner Allott.

If that is so, then North Yorkshire will be saddled with a deeply unpopular lame duck commissioner that has lost the support and confidence of the electorate and the police and fire officers he is supposed to lead.