Readers who are familiar with the themes interconnecting a number of my articles about the ‘education sector’, as it manifests in Whitby, will be aware of my appraisal of the wider inefficacy of Safeguarding procedures throughout North Yorkshire.

In this context, I have made passing reference to Richmond School (RS), where Headteacher Mr Ian ROBERTSON has been following a course in many ways parallel, in scope and ambition, to that  pursued by Caedmon College Whitby (CCW) Headteacher Mr Keith PRYTHERCH.

With aspirations running so high, it is difficult to imagine that either would feel vindicated by an OfSTED Report of merely ‘Good’.

In the case of Mr Ian ROBERTSON, we know that he has already flown the coop – as reported in an earlier article. My own view is that Mr ROBERTSON’s unanticipated departure most probably relates to aftershocks from the wave of reputational damage covered extensively in his school’s local newspaper – the Darlington & Stockton Times – throughout 2014 and into 2015. Links provided here. What a fiasco.

Not entirely coincidentally, both schools have now ‘survived’ an OfSTED Inspection by achieving ‘Good’ in their respective ensuing OfSTED Reports. An examination of the ethos and aspirations of Richmond School and Caedmon College Whitby reveals an almost identical corporate value system. Slick, glossy and streamlined, mellowed by a gushing purported embrace of community involvement.

The Richmond School 17th/18th January 2017 OfSTED Report is available here. (Quick overview at the foot of this page).

Today’s news that Mr PRYTHERCH’s school has also scraped an OfSTED Report of ‘Good’ therefore begs the question: how long might we expect the profoundly unpopular Mr PRYTHERCH to stick around – given that the other two legs of the stool are already broken?

The Caedmon Community College 1st/2nd February 2017 OfSTED Report is available here. (Quick overview at the foot of this page).

Both Headteachers have enjoyed the vigorous support of the Corporate Director: Children & Young People’s Services Mr Pete DWYER, and both have acquired a reputation for ruthless ambition and a penchant for burying issues that risk tarnishing the all-important public perception of their ‘fast lane’ establishments – in particular, Safeguarding issues.

Those ‘in the know’ in the education sector in and around Richmond have expressed a degree of surprise that Richmond School attained a ‘Good’, having expected something far less palatable to Mr ROBERTSON.

And yet the Darlington & Stockton Times reports on Richmond School in the most glowing terms, describing Headteacher Ian ROBERTSON’s vision for the future of the school within a Multi-Academy Trust (MAT) – an ambition that would be badly handicapped by any lesser grade than ‘Good’, thus:

This disparity of opinion between the OfSTED Inspectors and the local pundits struck me as bearing a marked resemblance to circumstances at Caedmon College Whitby, where exactly the same raising of eyebrows has accompanied the recent OfSTED Inspection.

So I decided to set out the following comparison tables abstracted from the recently published Department for Education (DfE) Performance Tables Headline Data returns for 2016, to see for myself how these two ‘Good’ schools really stand up to comparison with other schools in Pete DWYER’s purview:

in comparison with 31 similar LA-maintained secondary schools in North Yorkshire. 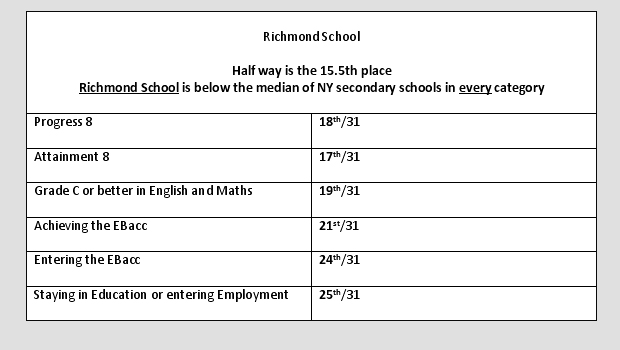 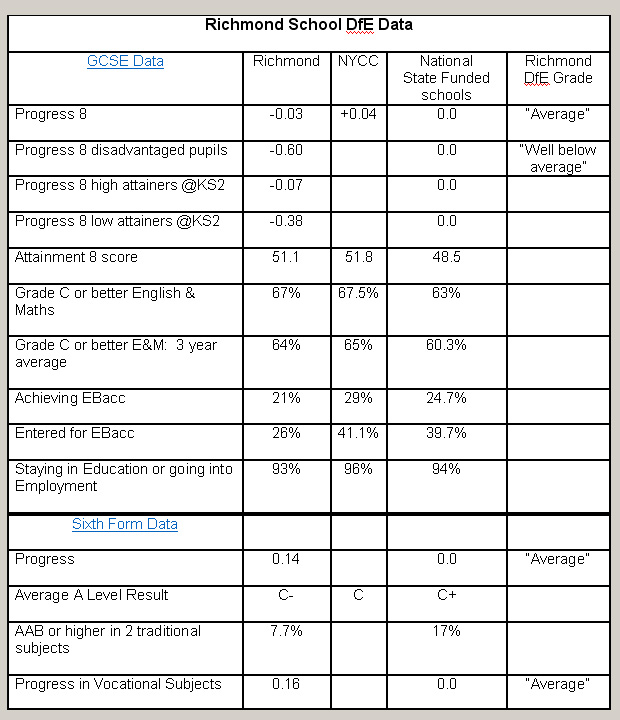 As is clearly evident from the DfE figures, Richmond School comes out at an average of 21st place (among 31 North Yorkshire LA-maintained schools) on those six leading indicants [upper table].

No, it is somewhat below mediocre. 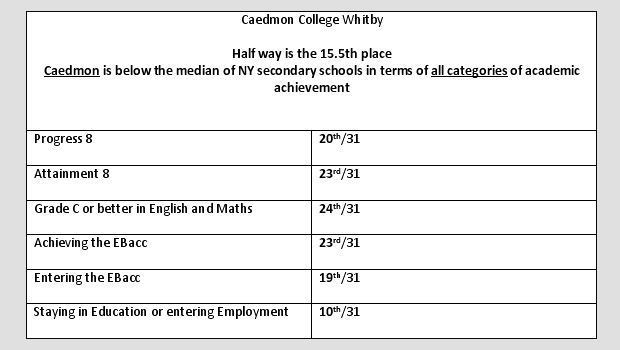 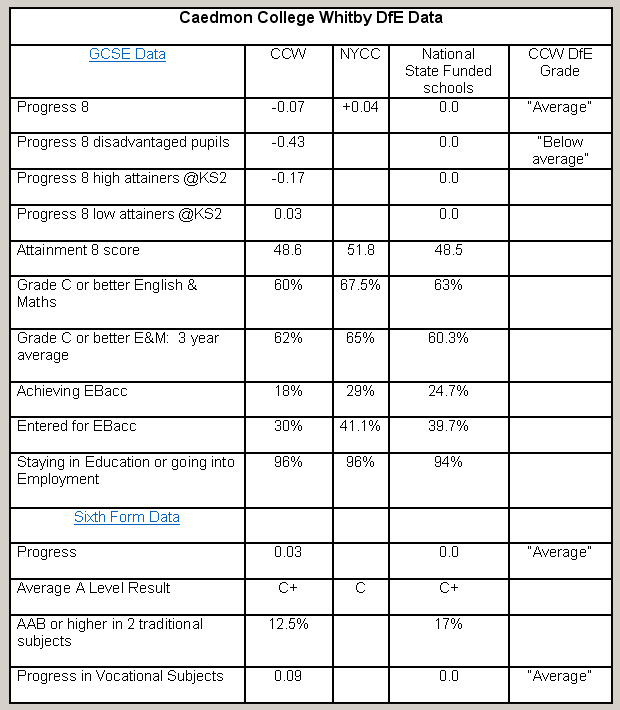 Caedmon College Whitby fares slightly better at an average of 20th place (of 31 North Yorkshire LA-maintained schools) on those six leading indicants [upper table], placing it on the very threshold of the bottom third – and saved from a significantly lower placing only by that anomalous 10th place in the ‘Staying in Education or entering Employment’ category.

No. Again, it is somewhat below mediocre.

If ‘somewhat below mediocre’ suffices to obtain an OfSTED rating of ‘Good’, presumably ‘Outstanding’ must amount to no more than average, at best, as compared to other North Yorkshire LA-maintained schools.

This is a question to take up with Her Majesty’s Inspector Debbie REDSHAW, who led both Inspections with (it has to be said) a very gentle touch indeed.

To facilitate direct comparison, here are the RS and CCW placings, side by side: 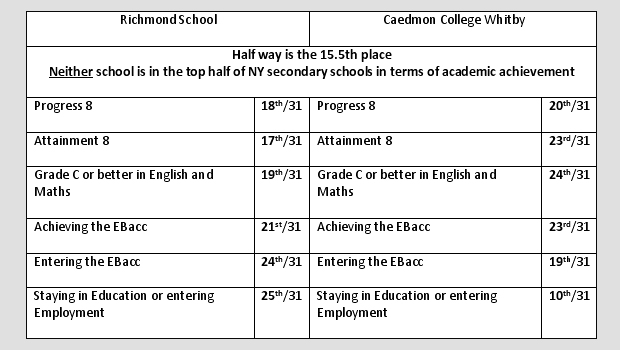 As can be seen at a glance, were it not for that uncharacteristic result in ‘Staying in Education or Entering Employment’, CCW would have slipped somewhat below Richmond School into the bottom quarter of the group.

Clearly, no matter how much Mssrs ROBERTSON and PRYTHERCH ‘big up’ Richmond and Caedmon, the plain truth is that both are somewhat below mediocre, consistently deep into the bottom half of the County league tables. In truth, really quite poor.

The ‘bigging up’ of the purported excellence of these two schools is the other side of the coin from their determination to bury bad news like bullying, sexual discrimination, self-harming, drug abuse and (in one case) rape. Clearly, what matters is public perception – not performance.

All this conveys an important message to parents – namely: you can trust what it says on the tin about as much as you can trust your average driveway re-surfacing scally. Your child’s preparation for adult life cannot wisely be entrusted to sheer hype.

Meanwhile, I have posed another question to Mr DWYER:

The National College of Teaching & Learning is the body with quasi-judicial powers to investigate misconduct complaints and impose sanctions where complaints are upheld.

The Disclosure & Barring Services is the body with powers to bar members of the teaching profession from working with children and vulnerable people.

Hopefully, Mr DWYER will enlighten us about just how many bad apples have been corrupting the barrel in recent years. 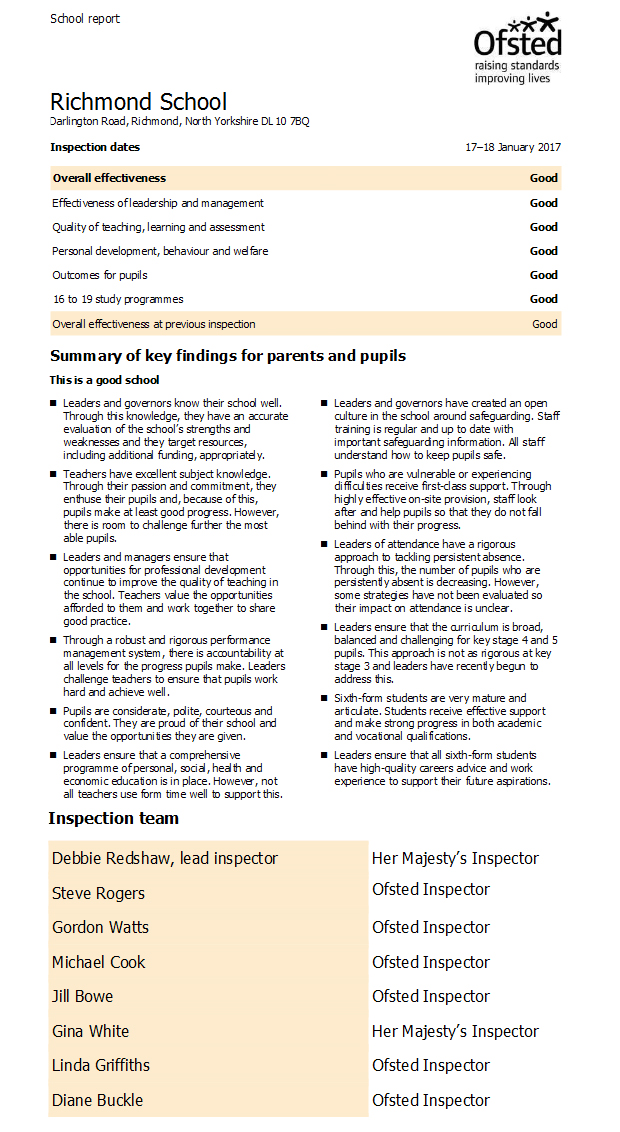 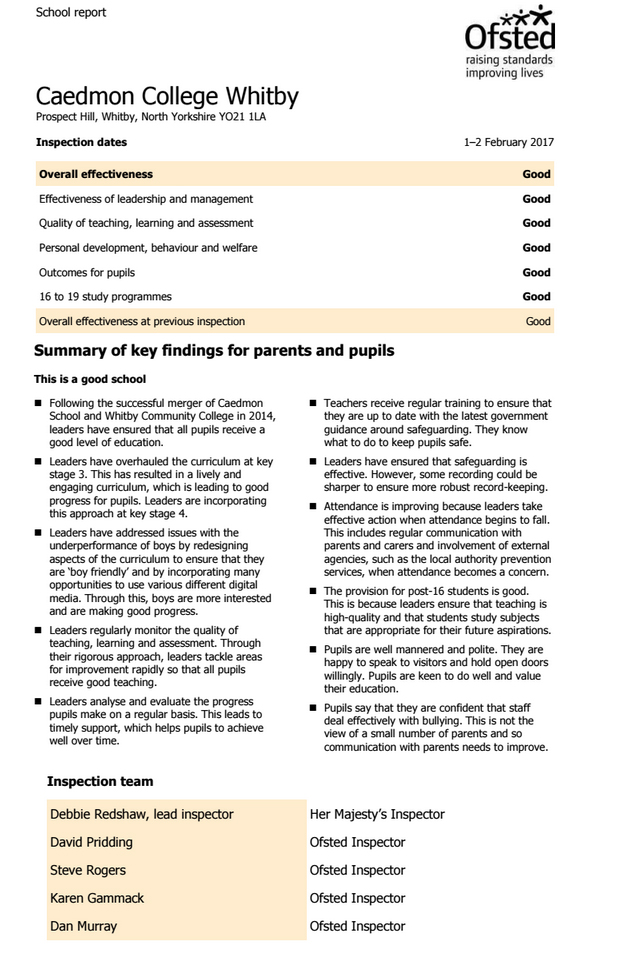 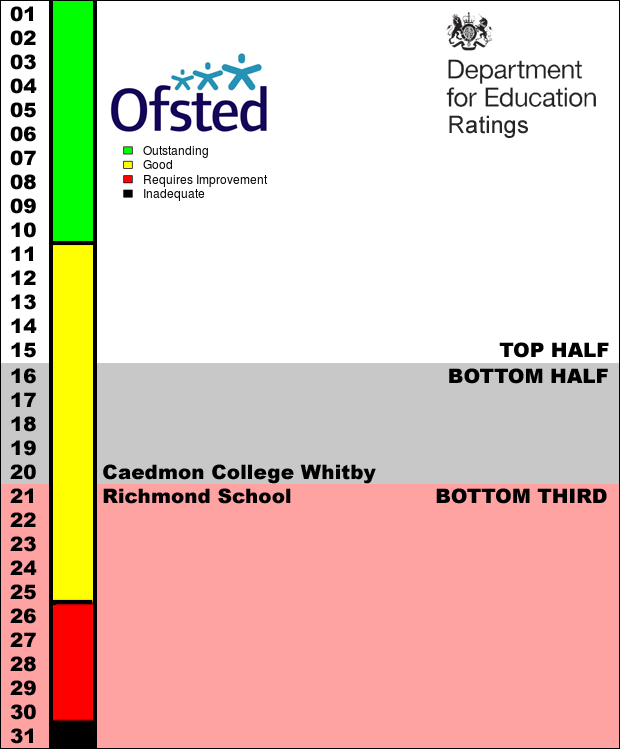