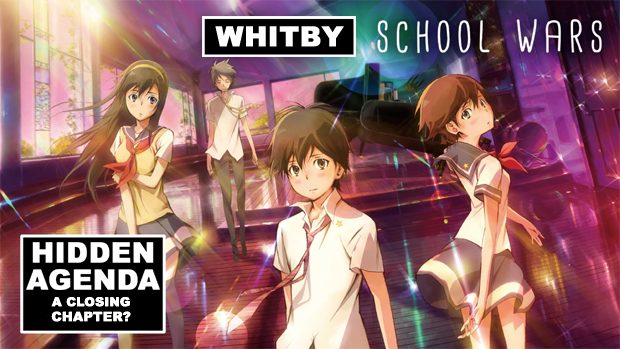 Are we are entering the closing chapter in Whitby’s secondary schools’ long-running saga?

Do County Officials really care about the future of education in our Town?

We are about to find out.

NYCC’s preferred option has always been to create one 11-19 split-site school.

Caedmon College Whitby is fully supportive of this option as it will help their deficit budget and ensure increased salaries for a few.

Eskdale School wants to build on what has been achieved to date and become an 11-16 school.

To this aim they have the full support of parents, students, staff and the majority in the community.

They first have to become an 11-16 School before they can then consult on and possibly apply to become an Academy.

Everyone knows the steps needed so any childlike Tweets, suggesting anything else, is irrelevant.

A-level choices with so many students now opting for post 16 educational provision out of town.

A special bus to Prior Pursglove College is available from September, whilst other students have chosen different Colleges on Teesside or in Scarborough.

NYCC has approved the admission policy and budget for an 11-16 school at Eskdale from September ’17.

Eskdale School has been clear in their letters to students and parents.

However there has been no comment from the Head of Youth Services, Pete Dwyer, who retires this July.

What is he waiting for?

Eskdale School will have an Ofsted Inspection in May, and we can only surmise that Pete Dwyer is hoping that the outcome of this Report will be ‘Requires Improvement’ in one or more areas.

That outcome would give him the chance of fulfilling the County’s long term aim of one 11-19 split-site school.

You can already see the Press Release:

This outcome however would NOT be the very best for our students.

It would be a disaster that would do untold damage to the education of many, for years to come.

That would apply equally to the students of  Eskdale AND Caedmon College.

Eskdale School has been working hard to ensure that the wishes of some do not play out.

The leadership team at Eskdale has been under severe pressure for some considerable time but, despite relative inexperience in their roles, they have coped extremely well.

Nothing should be taken away from their obvious talents and passion for Eskdale but in the coming weeks they have to show what they and all the staff are capable of.

Never has strong inspirational leadership been more important than it is now.

Caedmon College could have done far more to support Eskdale – but for the blinkered vision of a few.

In practice, they have been responsible for much of the pressure over several years.

We have to trust that no undue pressure can now be put on Ofsted to influence the outcome of the forthcoming inspection given so much is resting upon it.

If recent allegations (i.e. the removal of staff and pupils at Caedmon College during Ofsted Inspections) are true, then it does appear outcomes can be politically influenced.

One Inspector might have even complimented their leadership team for removing disruptive pupils to ensure a favourable result – surely not!

To these should be added other incidents which have shown leadership there in an extremely poor light, but County Hall has done nothing stop their actions.

County has done very little to ensure that all staff in their schools behave in a professional manner and any leadership issues are fully addressed.

If for any reason the outcome at Eskdale is not good, then County must shoulder much of the blame.  Sticking their head in the sand is both worrying and frightening.

Whitby could be about to be hung out to dry.

Caedmon College have banners around the Town asking for the communities support on ‘their path to Outstanding’.

Many would prefer them to achieve genuinely GOOD  by being higher than 28th in the 11-16 league table of North Yorkshire Secondary Schools, recording all incidents of Safeguarding & bullying issues, showing higher professional standards, allowing Inspectors to inspect a normal school day, etc, etc.

As the non-recording of Safeguarding issues was acknowledged by Ofsted, how in fact did CCW ever receive a good report when they obviously required Improvement?

If we see any sort of amalgamation between the two schools with a joint Governing Body, this will lead in short time to one 11-19 school on split-sites.

The new school(s) will be, to all intents and purposes, an expanded Caedmon College showing the same ethics and morality as now, where, if the allegations are true, cheating is a value to be admired.

Alarm bells should be ringing in BOTH our Secondary Schools

Whitby would  have Scarborough’s Graham School scenario with no turning back and the fate of our students sealed for years to come.

No one person or small group should ever be allowed to destroy the opportunity to establish the very best educational opportunities for ALL our students. 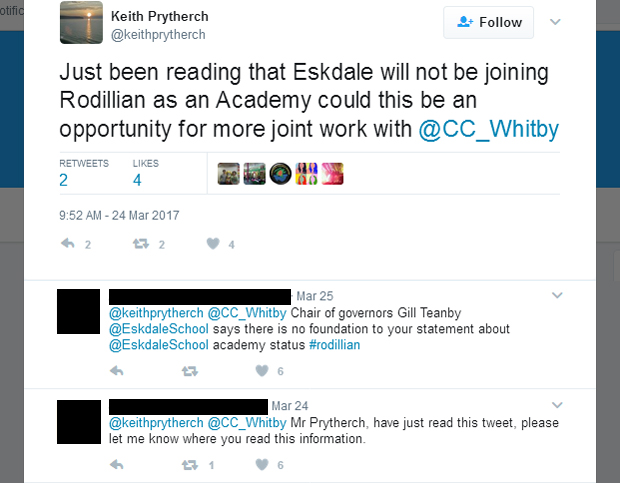 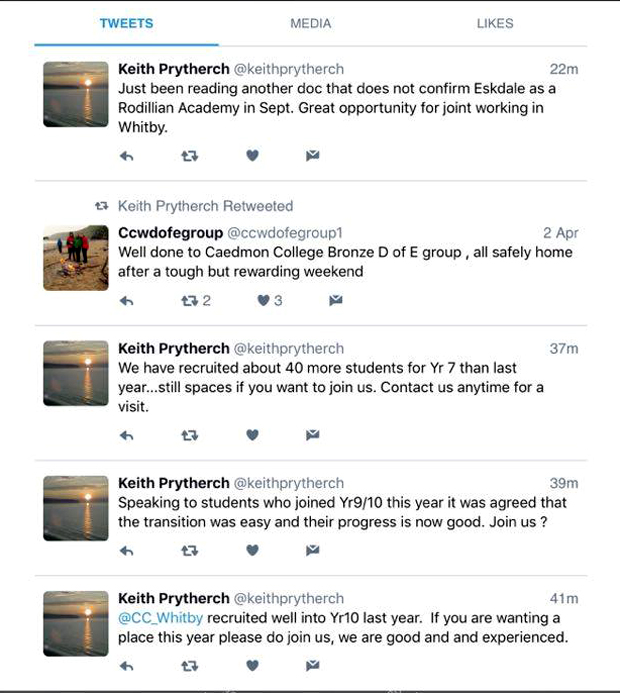