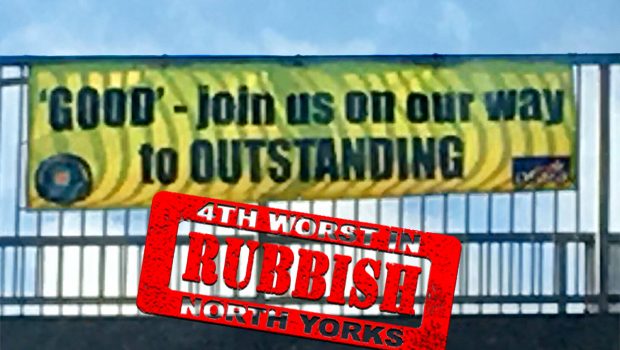 Retirement at the peak of their careers? All three? Or a shuffling out in the face of a litany of failures?

An expedient move on the part of NYCC to protect its reputation, maybe. Probably. NYCC does not have a track record of grasping nettles, preferring to dig them up and transplant them elsewhere – anywhere. Inevitably somewhere lucrative.

Let us examine the circumstances surrounding the departures of: 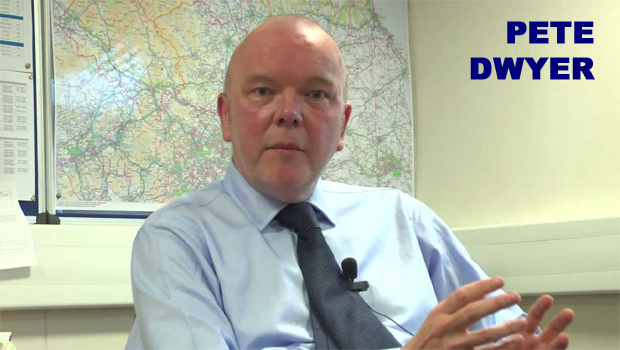 Consider the announcement of the Ann MAGUIRE inquest shortly before his retirement statement, initially proposed for March this year, but subsequently deferred until this November. He had been appointed by the Leeds Local Safeguarding Children Board as the ‘independent’ reviewer of the case – until he stepped down in the face of questions as to his impartiality. In fact, he been an employee of Leeds City Council for over 17 years – Local Authorities effectively ‘run’ these review boards – which had not been disclosed at the time. Pete DWYER became toxic.

We come now to the Headteachers of the two schools I studied in my “Beyond OfSTED: Two ‘Good’ Schools – Or All Hype?”, article back in February of this year. 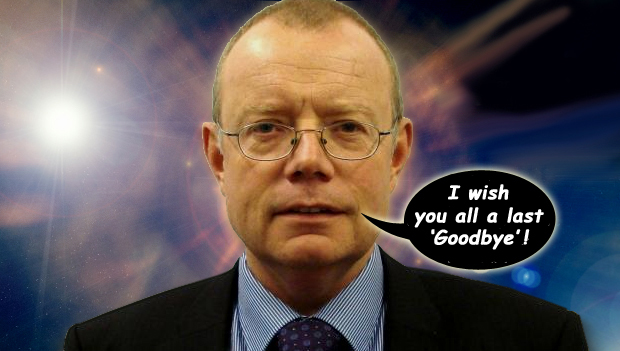 Additional safeguarding failures were identified at Richmond School in January 2017 and submitted to Ofsted, then passed back to Pete DWYER – though apparently NOT disclosed to the OfSTED Inspectors. Within four days, ROBERTSON announced his retirement. The Enquirer will be covering that horrendous Safeguarding back-story in due course. 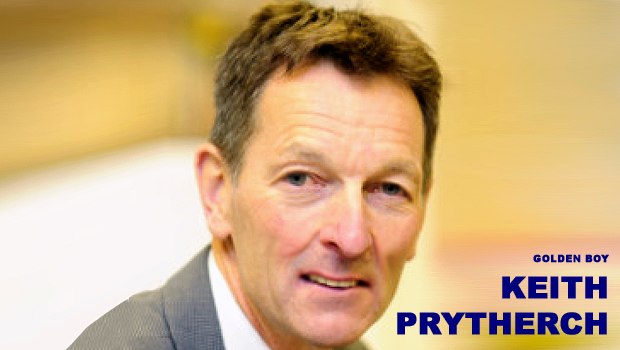 The case of Caedmon College Whitby Headteacher (or, as he prefers, Principal) Keith ‘Golden Boy’ PRYTHERCH inhabits a less nuanced set of circumstances – and begs the question: What is the point of OfSTED? (The same question is also begged regarding the Richmond School OfSTED inspection, but I shall return to Richmond School in a separate article).

Here are some OfSTED excerpts from its inspection of Caedmon College in February 2017:

“Following the successful merger of Caedmon School and Whitby Community College in 2014, leaders have ensured that all pupils receive a good level of education.”

“Leaders have addressed issues with the underperformance of boys by redesigning aspects of the curriculum …  Through this, boys are more interested and are making good progress.”

“Through their rigorous approach, leaders tackle areas for improvement rapidly …”

“Leaders analyse and evaluate the progress pupils make on a regular basis. This leads to timely support, which helps pupils to achieve well over time.”

From the full Report:

“At key stage 4, leaders have increased the opportunities for pupils to study EBacc subjects when it is the right choice for the pupil. The number of pupils choosing to study these subjects is increasing.”

“Leaders have improved behaviour for learning … which means that pupils are more focused on their learning and as a result making good progress.”

“Leaders implemented a clear and comprehensive action plan. The impact of this on improving progress for this group, particularly the disadvantaged most able, is clearly seen in current progress information.”

“Leaders carry out effective monitoring of the quality of teaching and learning … This leads to better outcomes for pupils.”

“Leaders have ensured that the spending of additional funding has an impact on pupil outcomes.”

“Leaders are improving progress for key groups of pupils … Through a bespoke programme of intervention, these pupils are making better progress.”

It reads like paradise is just around the next corner. “Jam tomorrow”. The reality is closer to paradise lost – or, rather, squandered.

Readers will perhaps recall my analyses of this report – far from favourable though, as it turns out, arguably quite generous.

And now to recent events.

Here are the latest Department for Education Schools Performance data, published just over a week ago (they are ‘provisional’ and will be confirmed only in January next year; but they are stark):

Before proceeding, take a moment to scroll back up to the top of the page to that featured photograph, taken just a few days ago. On second thoughts, I shall spare you the inconvenience. Here it is again: 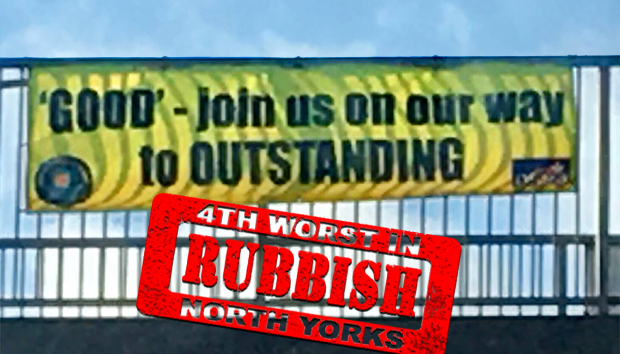 “‘GOOD’ – Join us on our way to OUTSTANDING”

The bull doesn’t come any shittier than that.

What seems absolutely clear is that information gathered from the school by OfSTED, imparted to them by senior leaders and purporting to be a true reflection of progress and potential achievement, has in fact simply not been borne out by the facts. Any potential achievement has de-materialised big time. It was all flannel.

“Join us on the way to hell in and hand-basket”.

Whatever was said to the OfSTED inspectors in February –  data-tracking that the school claimed at the time to be valid – was little more than, at best, overly optimistic speculation on the part of the school leadership.

All a school must do is to show OfSTED its own data-tracking reports – reports produced by the school, by the very people who have most to gain – inflate them, and all will appear well.  For a while. The reality of the OfSTED inspection system is that the school leadership is automatically and unquestioningly believed. True, triangulation is taken from NYCC Officers, but what if they too have been mislead – or are party to the deception?

There is no impatially objective triangulation. In fact, no proper triangulation at all.  Everyone on the education gravy train at NYCC and at school level has everything to gain from this LA/school symbiotic relationship. The same cannot be said for the students who, having lost out big-style, are leaving in droves. Keith PRYTHERCH will be leaving a school whose sixth form provision is dwindling rapidly to zero.

Hitherto, the school has been  reliant on waving  the OfFSTED Reports in the faces of staff, teaching recruits, students, parents, the community, the DfE, NCTL and Uncle Tom – not to mention prospective Academy chains – and the gravy train rolls on. Now we see that it was waving nothing but pipe-dreams.

The education system is overly-reliant on trust and honesty. It should have at its heart integrity, but with some leaders of schools integrity has gone AWOL. With some Childrens’ Services staff it has given way to blind expediency.

The problems only become manifest when the Emperor is revealed to have no clothes.

These results show that Keith PRYTHERCH will be remembered as ‘The Naked Principal’. If only we could have confidence in the Governing Body’s ability to appoint a quality successor.

Do I get extra points for a hat-trick? 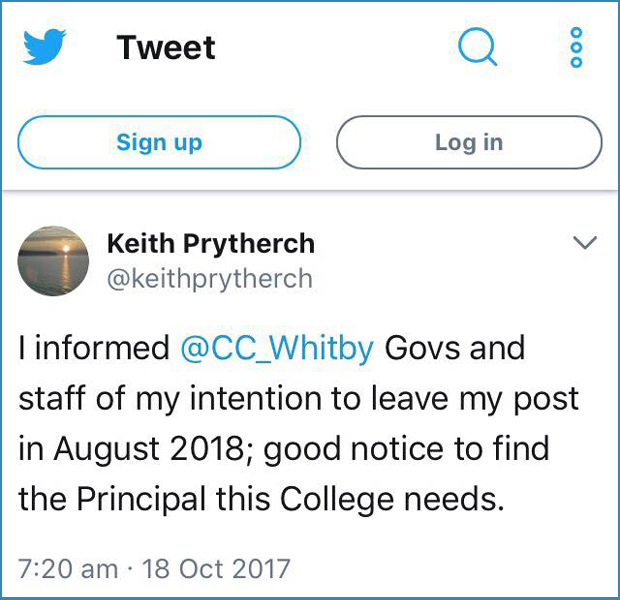 It most certainly does!