The first of these ‘retirements’ – Pete DWYER himself (exclusively reported here on the Enquirer on 25th January 2017) came from a clear sky – at least as far as the County spin doctors would have us believe – at time when CYPS has been trumpeting impressive advances under Pete DWYER’s leadership. 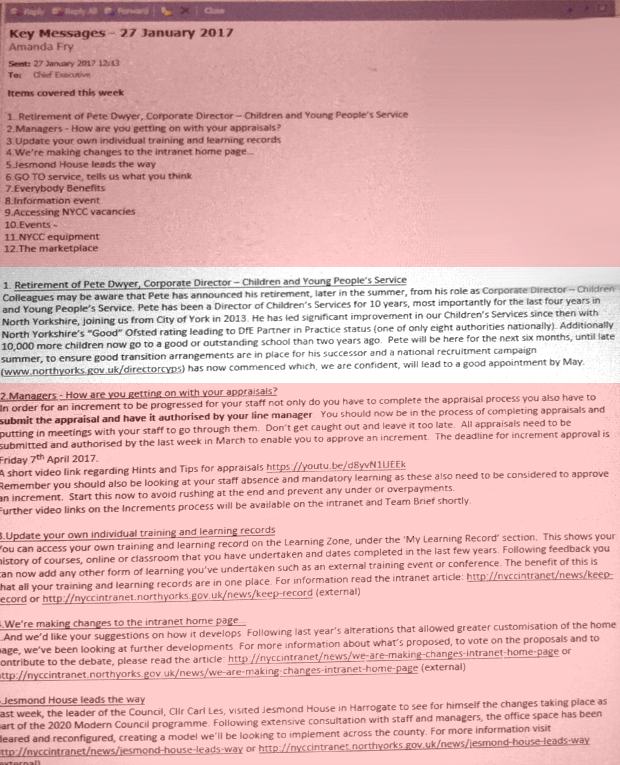 “He [Pete DWYER] has led significant improvement in our Children’s Services . . .”

I needed two bites at that “significant improvement”.

Career-wise, as recently as Christmas 2016 Pete DWYER was widely expected to stay at the helm of education in North Yorkshire until the supervised migration of the vast majority of LEA schools to Academies/MATS has achieved its ‘mission accomplished’ status. That dream is gone. NYCC has six months in which to replace him.

The other side of the coin – the dark side – is the bunker mentality of the LEA regarding the systemic failure of the No Wrong Door integrated Safeguarding protocol – though one would never know it from the bright tone and saccharine language of most school web-site’s ‘Letters to Parents’ pages, or from the Press Releases on the NYCC web-site, Safeguarding is an unfolding catastrophe in North Yorkshire. It has been doing a slow burn throughout Pete DWYER’s watch and will remain his legacy, as I have commented elsewhere.

So, spin apart, it has been apparent to all who closely observe, for well over a year now, that something needed to change at CYPS.

Back on 7th April 2016, having been stone-walled in my efforts to progress Safeguarding issues on behalf of a number of parents with children at Caedmon College Whitby (CCW), I wrote to Sir Michael WILSHAW, then Her Majesty’s Chief Inspector at the Office for Standards in Education, Children’s Services and Skills (OfSTED).

I was attempting to secure an external investigation into a disturbing number of serious Safeguarding concerns. Previous attempts to progress parents’ complaints had been re-circulated to CCW Headteacher Keith PRYTHERCH, where they appear to have been halted, unbeknownst to the Governors. Letters and emails to Richard SIMPSON, Chair of the CCW Board of Governors were ignored. (The same, remember, is true of emails to the Hawsker C of E Primary School Chair of Governors, Dr Andrea DICKINSON-BACK). Is it ‘policy’ to disregard Safeguarding complaints? Or to ‘pass the parcel’ back to the Headteacher’s black hole?

So I shared with Sir Michael multiple allegations made by members of the public, in the public domain, concerning serious safeguarding breaches at CCW. I also provided video evidence of physical bullying. My email was read-receipted on 8th April 2016 and then read again on 12th April. On 15th April 2016, I received an acknowledgement. Four days later I was informed that my material had been passed to the ‘Complaints about Schools’ Team, who would inform CYPS – and the Headteacher. All roads lead to Rome. Since then, not a word, save for a confirmation of the same information on 16th May 2016.

Every organisation I have approached (including the Office of the Secretary of State for Education, OfSTED, NYCSB, the LADO, etc) has directed me to address my concerns right back to the relevant Headteacher. That is where the buck stops. Or is stopped. Or simply dematerialises.

Thus do I arrive at my opinion that some Headteachers are so committed to the reputational management of their schools that any threat to a wholesome and pristine image is smothered before it takes its first breath. It is easy to show a clean Safeguarding record if no Safeguarding issues are properly logged. This same practice has been a matter of policy for many years within Police Forces, whose Professional Standards Directorates have well-developed techniques for negating complaints under what is termed ‘local resolution’, with no investigation at all.

Fast-forward to 23rd January 2017, when I received an email requesting my assistance in alerting OfSTED to a raft of Safeguarding failures at Richmond School. I immediately recognised that the similarities in modus operandi with Caedmon College Whitby were striking – an apparent policy of (i) mollifying parents, (ii) avoiding logging incidents and (iii) keeping the Governing Body and the LEA completely out of the picture.

“I have evidence which demonstrates specific failures to address serious safeguarding issues . . . [redacted] . . . which should have been notified to NYCC and OFSTED. There were four to my knowledge – serious bullying Yr 8, sexual assault/cyber-bullying Yr 12 and two self-harming cases, one later becoming an allegation of rape Yr 9/10 . . . [redacted] . I know these were life changing events for at least 2 of the cases.”

My email has yet to be acknowledged.

In itself, this is unsurprising. However, Richmond School was inspected by OfSTED Inspectors – S8 on Tuesday 17th January, then a full S5 Inspection by eight Inspectors on Wednesday 18th January. The question has been asked of OfSTED regarding the possibility of certain conflicts of interests arising out of the nature of the relationships between certain members of the Inspectorate and certain members of the senior leadership team at Richmond School, with a concomitant question regarding the ability of OfSTED, given these questionable relationships, to conduct an impartial Inspection.

Then, on 27th January 2017, only four days after letting OfSTED know that the Richmond School cat was out of the staff-room – though almost nine months after I raised very serious parental concerns regarding CCW (during which time who knows how much anguish and trauma has been endured by children and parents – and, in some cases, members of staff?) – I received, out of the blue, OfSTED’s dismissal of my CCW concerns, from which I quote:

NB: Pete DWYER and the LADO asserted to OfSTED that “there were no serious concerns”. That would be our old friend ‘reputational management’ strutting its stuff again. It will not play well with parents whose concerns are deep and enduring.

Yet, lo and behold, we now know that OfSTED has been into CCW and Headteacher Keith PRYTHERCH has had to fly home poste haste from Austria (where he was accompanying a group of children on a term-time skiing holiday).

Theories abound. In my view, this one tells the most plausible story:

Nothing to see here, folks. Move along. Keep shopping.

Here we are, Thursday afternoon, and Golden Boy is winging his way back to Austria to make up the numbers for the homeward leg of the school trip. What could this lightning visit possibly have accomplished? If his school cannot cope without him, why was he sloping off skiing in the first place?

Let us review the time-line of these ostensibly unconnected events: 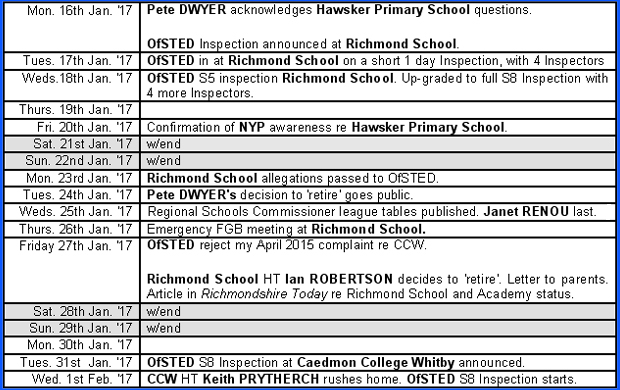 Both have acquired a reputation as autocratic, go-getter empire-builders. Both have been eyeing Academy opportunities that would place them at the apex of corporate schooling provision for a large segment of North Yorkshire. In fact, many pundits hold the view that they have been looking to carve out neighbouring domains covering the better part of the northern sector of North Yorkshire – and perhaps Redcar & Cleveland into the bargain – and that negotiations are well advanced.

Then, within a matter of weeks – and within a matter of ten days of Pete DWYER choosing to ‘retire’, Ian ROBERTSON has also bugged out for the dug-out – and, like DWYER, he leaves with anticipated future triumphs almost in grasp. And Keith PRYTHERCH flew home mid-schnitzel to romance the Inspectors. Hmmm.

Speculation, as we know, buttereth no parsnips.

But in the prelude to this flurry of intense activity, ripples were already spreading through agencies beyond the North Yorkshire hot-house.

Of course, the person tasked with maintaining a vigilant watch over these developments is Janet RENOU, Regional Schools Commissioner (RSC) for the North of England. Ms RENOU has the distinction of coming last of all in the recently published performance league table of RSCs.

Professor Nick FROST has admitted that the North Yorkshire Children’s Safeguarding Board, of which he is Independent Chair, has no statutory powers to investigate parents complaints.

Fortunately, there are two other bodies, each located beyond the realm of influence of the North Yorkshire cartel, who can be persuaded to investigate bona fide Safeguarding allegations with proper diligence; the Department for Education (DfE) and the National College of Teaching & Leadership (NCTL).

I expect to be reporting on the progress being made by these bodies in the coming days and weeks.

To re-cap: I have raised four bold type questions in this article:

I have also raised these questions with Pete DWYER. We can but hope for a prompt and transparent response.

I may be wrong, but I think la merde is about to frappe le ventilateur.

For more background on the North Yorkshire Safeguarding failures, readers are referred to the following articles: