Following yesterday’s exclusive report in the North Yorks Enquirer to the effect that NYCC’s much-beleaguered Corporate Director: Children & Young Peoples’ Services (CYPS) Pete DWYER has chosen to ‘retire’ from his position (giving six months notice to allow for the recruitment of a replacement) after less than four years in the position, the talk in the staff rooms of almost every school in the County has centred on one key question:

In fact, Pete DWYER (b. February 1958) had already attained potential retirement age (55) at the time of his 2013 appointment at NYCC.

At a time when virtually every school in North Yorkshire is evaluating and actively soliciting Academy partners, reputational management – an area in which Pete DWYER excelled during his time at City of York Council – has percolated to the very top of the agenda.

It is in this area the Pete DWYER has most had his work cut out – and where he has not, in my view, proved equal to the task.

In fairness, he inherited a mess when he stepped up from being the head honcho for schools at City of York Council, where his reputation was excellent, both as an administrator and on a purely human level: smart, committed and personable in the extreme – an all-round good guy.

He must have appeared the perfect candidate to replace his predecessor at NYCC, Cynthia WELBOURNE, whose hapless design for the roll-out of the Extended Schools “Me Too!” School Voucher Scheme, which allowed much of a £1.5M grant from central government (10%-matched by another £150K from County) to be siphoned off by an army of opportunist service-providers (including SBC), is widely believed to have cost her her position.

Some of these service providers were given the inside nod about how best to exploit a system that was later described as “a licence to print money”. 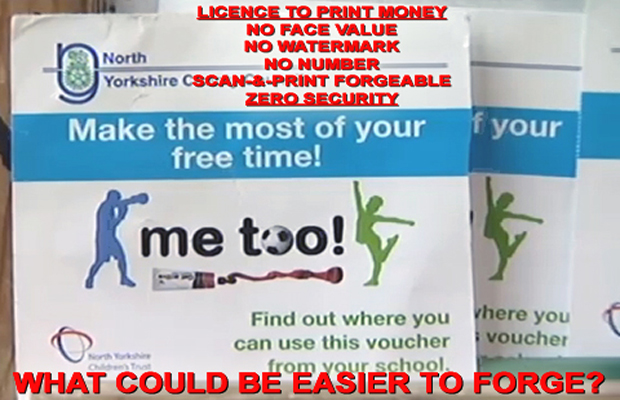 Like every other local authority cock-up, the “Me Too!” fiasco was swiftly and safely covered up and forgotten – though not, perhaps,  by County Councillor Joe PLANT [Con.], whose election majority is far from secure.

But unfortunately for Mr DWYER, his arrival at County Hall coincided with the very moment when child sexual abuse (CSA) was on the front pages of the newspapers. Jimmy SAVILE and Peter JACONELLI were certainly the most high-profile abusers in the North Yorkshire area but, before long, virtually everyone in a position of trust with children and young people came under the most intense scrutiny.

This scrutiny concentrated not only on the abusers themselves, but on the management systems that had allowed predatory paedophiles to infiltrate our schools, care homes and hospitals.

On this count alone, Pete DWYER’s lot may not have been an enviable one. But the Conservative government’s drive towards the direct funding of Academies certainly has added greatly to his burden. It must be remembered that not only does NYCC, in its Local Education Authority incarnation, provide the funding to state schools, it also recoups money from them, too, in the form of fees for services – such as building and grounds maintenance, HR facilities, legal services and so on.

Readers will no doubt retain clear memories of Pete DWYER’s drive to close Eskdale School in Whitby, with a view to recouping for County something in the order of £15M from the sale of the site for housing development.

But battles like the Eskdale School stand-off are meat-and-potatoes to Pete DWYER and his colleagues; of far more concern are the many Safeguarding issues that have arisen in the wake of the CSA scandals. Many parents have looked more closely at the stories their children have brought home from school, and many have tried (frequently in vain) to enlist the help of CYPS in their Safeguarding concerns. (Again, regular readers will know that my own efforts to address Safeguarding issues have been stone-walled at every turn).

What is not so commonly known is the extent to which CSA is prevalent in schools today. The sad truth is that both CYPS and Human Resources (HR) have performed disastrously when it comes to all aspects of Safeguarding. Nevertheless, a diligent application of ‘reputational management’ has mostly kept the lid on a catalogue of horrendous failures. This ‘reputational management’ frequently relies on the tried-and-tested technique of dragging out investigations, sometimes over a period of years, and moving suspects sideways to other parts of the country – so that if the ordure eventually does hit the fan, it does so only in far-flung out-of-area local/regional newspapers, seldom here in North Yorkshire.

Let me offer some examples:

Music teacher Simon BALL, formerly of Giggleswick Senior School in Settle, North Yorkshire, was ‘outed’ and prosecuted (in November 2016) only after moving to a school near Huntingdon – conveniently minimising the ‘reputational damage’ to NYCC.

Yet his conduct was widely known in the school and the local community. How could NYCC have missed it? Obviously, they did not.

And there are more such incidents:

“A spokesman from the local education authority, North Yorkshire County Council, has refused to comment on the nature of the allegation leading to the suspension.”

“North Yorkshire County Council can confirm that a teacher has been suspended from Whitby Community College and that an investigation is currently under way.”

Of course, these particular examples precede Pete DWYER’s period of tenure. But let us remember that he was hired to clean up the detritus left by his predecessor. He is now walking away from some detritus of his own.

County Councillor Stuart Parsons told the NE: “If a multi-agency team were working on having the picture removed or the account suspended, parents should have been told so they didn’t have to find out through other parents.

“The team has been investigating it but it seems odd the parents weren’t told.”

Parents of children past and present at Hawsker C of E Primary School may not find it odd at all, being by now veterans of NYCC’s “mushroom” policy – “keep ’em in the dark and feed ’em sh*t!”

Sadly, the truth is that it is a commonplace for NYCC to learn nothing about Safeguarding incidents because senior management figures in schools routinely avoid logging anything that they hope they can be swiftly punted into the long grass. In many cases, they do not even inform their own Governing Bodies!

And in some cases, senior management appears to have to have actually colluded in the protection of abusers. I refer, by way of example, to my own article of 5th September 2016, covering decades-long abuses at Ampleforth College, entitled “Savile/Jaconelli – Far From The MADDEN* Crowd?”, first revealed by Andrew NORFOLK of The Times newspaper.

I am not suggesting that Peter DWYER bears the burden for this lamentable state of affairs – only that he has signally failed to rectify it.

Equally disturbing are the cases in which NYCC’s over-zealous determination to be seen to be doing well have resulted in long drawn-out ordeals for innocent teaching staff:

“Prosecutor Simon Kealey said it had been a ‘substantial and complex’ investigation by North Yorkshire Police. He said there had been problems with officers in the child abuse investigation team, at Northallerton [NYCC], either being on long-term sick or on ‘restricted’ duties”

and, from an NYCC spokesperson

“A full review of the investigation will be undertaken to assess any lessons learned and until this review is completed it would be inappropriate to comment further.”

One would doubt that the falsely accused teacher in that case, Neil FRANCIS, draws much consolation from that pitiful old disclaimer about “lessons learned”.

One of those “lessons learned” during the DWYER years has been to keep CYPS/HR failures out of the newspapers. Indeed, a number of catastrophic errors of judgement have been kept out of the press completely, including a recent case in my own area (very similar to the last of those cited above), that I have refrained from reporting for very obvious reasons.

I am also being kept abreast of a diabolical cover-up by a Headteacher (with no small help from the LEA) of a case involving rape and self-harming in a well-renowned school in the north-western part of the County. Indeed, it was this case that led me to ask Pete DWYER whether or not the Hawsker Primary School suspension had been reported to the National College of Teaching & Leadership (NCTL), OfSTED and the North Yorkshire Police. The recent OfSTED inspection will, I am sure, trigger huge upheavals – behind closed doors, we may be sure.

What is very clear is that when all of the material that I hold on file is reviewed by out-of-area inspectors, NYCC will have no option but to revise and refine its patently inadequate management of Safeguarding issues.

In summary, and apropos the “did he jump or was he pushed” conundrum, let us remember that Pete DWYER has taken circa half a million pounds in salary out of the North Yorkshire coffers in the last (nearly) four years and, given an average life expectancy, may well take out another half million pounds through his pension plan. And for what?

In my relatively well-informed opinion, for a million pounds worth of failure.

That is what we get in the way of “value for money” NYCC-style? Can they really do no better?