Readers who recall my articles:

will already be aware of serious concerns regarding a wide range of Safeguarding issues in North Yorkshire generally, and at Caedmon College Whitby, in particular.

On Wednesday 13th April 2016, on the twentieth day after submitting a Freedom of Information request to Caedmon College Whitby, I received the following response from the Principal, Mr Keith PRYTHERCH, in person:

Further to your request, I can provide the following information.

1) The names and credentials of each individual member of the so-called ‘shadow’ Governing Body assembled to undertake the transition to The Whitby School, pursuant to the amalgamation of Caedmon College Whitby and Eskdale School.

2) The number of recorded Safeguarding issues in each of the following School years:

3) The number of unrecorded Safeguarding issues in each of the following School years:

4) The salaries of each individual member of the present Caedmon College Whitby Senior Management Team, together with their names and ‘official’ position titles.

My first observation concerns Keith PRYTHERCH’s response to the first of my questions.

Keith PRYTHERCH asserts that the identities of the members of the joint governors’ steering group “have been made public by a third party”.

Unfortunately, Mr PRYTHERCH must be aware that the identities of the members was provided – possibly in error – to a member of the public by Mrs Jackie HUNTER – Caedmon College Whitby’s Business Manager and Clerk to the Governing Body.

To be clear, in the case of my Freedom of Information request, I am the first party.

There is no third party in this constellation other than the member of the public to whom Mrs Jackie HUNTER (perhaps inadvertently) sent the unredacted Minutes, thereby disclosing the identities of the members of the joint governors’ steering group into the public domain. It has been mooted to me that perhaps Mrs Jackie HUNTER disclosed the identities “accidentally on purpose”. Who knows?

So Mr Keith PRYTHERCH has begun his response with a falsehood.

I am surprised that Mr Keith PRYTHERCH felt free to dissemble in this way because I published Mrs Jackie HUNTER’s unfortunate ‘error’ on 7th April 2016 in my article Eskdale: At Last – The UNREDACTED JSG Minutes 17/03/16, and he has admitted that he is aware of that.

It does not end there.

My request was lodged on 24th March 2016. The identities were disclosed to a third party two weeks later, on 7th April 2016. This has no bearing on CCW’s statutory duty to provide the requested information directly to me within the twenty working-day time-period. The fact that by 7th April 2016, I already held the requested information in no way negates CCW’s statutory duty to provide it.

And Mr PRYTHERCH has also fudged the issues in regard to providing the credentials of the members of the joint governors’ steering group. He has provided their positions, not their credentials.

‘Credentials’, in its ordinary and natural meaning, denotes:

This is the information I requested. Quite clearly, Mr Keith PRYTHERCH has not provided it.

In fact, Mr PRYTHERCH has withheld the identities of the members and withheld their credentials.

Apparently, he believes that the public has no business knowing who is making the decisions or whether or not they have any aptitude, experience or suitability to do so.

Mr Keith PRYTHERCH’s, in his FOIA response to me, asserts that there were 29 Safeguarding issues recorded during the school year Sept. ’14 to July ’15, and that, in the two completed terms Sept. ’15 to march ’16 there have already been 48 recorded incidents. Pro rata, this would suggest that a full school year total might be 72 incidents – two-and-a-half times the previous year’s total.

This, in itself, as a shocking revelation.

But the government definition of Safeguarding clearly includes such concerns as:

So how is it that on the same day as Mr Keith PRYTHERCH signed off my FOIA response, he also signed off an FOIA response to another member of the public who had requested the number of incidents of “bullying and negative treatment of children by both fellow pupils and/or staff” showing even more alarming figures:

But bullying represents only a part of the Safeguarding  – so how can these figures exceed the total recorded Safeguarding incidents?

Clearly, there is a huge disparity here – though both sets of figures have been signed off by Mr Keith PRYTHERCH.

Mr Keith PRYTHERCH asserts that all incidents are recorded. I ask again; how is it that the bullying figures alone vastly exceed the full spectrum Safeguarding figures? What is established here – at the very least – is that Mr Keith PRYTHERCH may not be qualified to teach simple arithmetic.

I have lodged an Appeal for Internal Review of Mr Keith PRYTHERCH’s response to my request. He appears to hold the view that, though the salary of the Director of Childrens’ & Young Peoples’ Services, Mr Pete DWYER is in the public domain (£129,600 p.a., last time I looked), lesser mortals need not account to the public for their handsome salaries.

A good contact of mine further up the food-chain has estimated that the Caedmon Principal must be in the £85-£95K p.a. band (plus bonuses of up to 10%), and the Assistant Principals in the £60K-£65K band. Together, they could be attracting the batter part of half-a-million pounds a year. Plus pension contributions. For that kind of money, one might reasonably expect them to record the Safeguarding figures more professionally than on the back of a fag packet.

Meanwhile, there have been other developments.

Firstly, information regarding how things are to proceed at Eskdale School from September 2016: 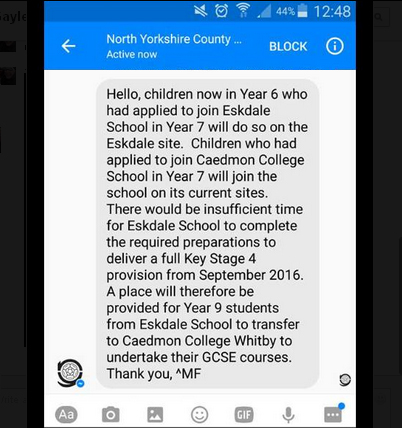 Secondly, correspondence today from OfSTED indicates that the Safeguarding issues are to be independently assessed. This is very welcome news indeed. I will be reporting on it in detail when it is appropriate to do so.

Finally, Eskdale Headteacher Sue WHELAN has, at long last, stated her position in a Consultation Response (pages 123/4) that Mr Keith PRYTHERCH is unlikely to have greeted with overt delight:

Neverthess, the battle is far from over. It will be interesting to see, when all is revealed, which careers are left behind on the battlefield. 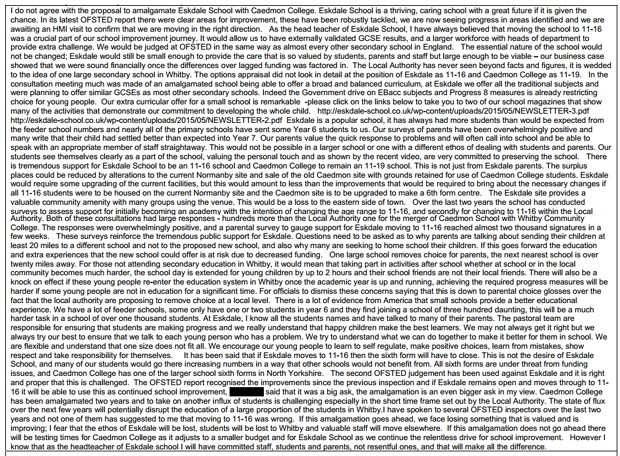