The received wisdom is that local Councils pursue a democratic approach to decision-making; electors elect representatives – Councillors – and these elected Councillors collectively conduct the affairs of the Council, in the public interest. They do so by attending meetings of Full Council (and its Committees) where they vote in favour of, or against, proposals to undertake actions intended to further the strategic aims of the Council, again in the public interest.

Many members of the public (and more than a few Councillors) have asked me to explain the mechanism through which these proposals come before the Council. Who dreams them up?

Whose idea was it to undertake the many unpopular and seemingly ill-considered proposals that have proved, over time, to be disastrous in terms of the overall well-being of the Borough – while the good ideas often come to nothing?

Which democratically elected Councillor(s), for example, proposed plans to:

These questions are fundamental when it comes to assessing just how democratic the decision-making process at Scarborough Borough Council (SBC) really is.

It is encouraging, therefore, to discover that one SBC Councillor has begun the process of eliciting answers to the burning question – who is calling the tune at SBC?

Thanks to the civic-mindedness of somebody at the Town Hall, the Enquirer has been made privy to an exchange of emails (from one Councillor to all other Councillors – via an SBC Officer – and a single response, from a single Councillor) that indicates that the question has now been asked – though specific answers (as we have come to expect) have yet to be forthcoming.

What is clear, though, is that an élite group of paid public servants (i.e. Officers, with no democratic mandate, led by CEO Jim DILLON) holds regular meetings to originate and detail ambitious plans for  proposals to set before Council – without any formal Agendas, and with Minutes made available exclusively to Councillors only 6-8 weeks after the event, and often not until after Councillors have already voted on Officers’ recommendations.

Generally, only the Leadership and selected members of the Cabinet are privy to the rationale behind new proposals. The majority of Councillors are voting ‘blind’ on proposals devised without their foreknowledge.

Small wonder, then, that the Town Hall is known throughout the Borough as ‘The House of Secrets’.

As one Councillor describes it, what we have at SBC is an oligarchy.

Oligarchy is not democracy; it is perilously close to dictatorship.

Here is that ’round-robin’ email exchange; readers may wish to draw their own conclusions.

I have redacted names to protect the innocent: 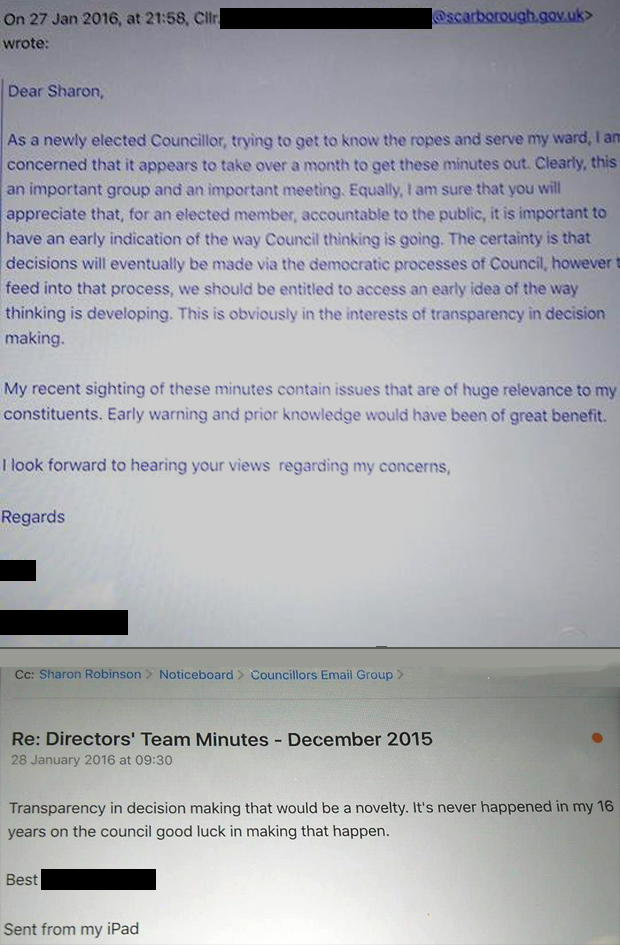 Consider that line again – a line not from me or one of my (alleged) ‘trouble-maker’ colleagues, but from a very experienced Borough Councillor:

And slowly, but very surely, more and more Councillors are reading the Enquirer – to find out what is really going on in their own Council.