Much has been made of Secretary of State Nicky MORGAN, Department for Education, having peformed the latest in a long line of Tory U-turns regarding the government’s controversial decision to force all LEA school’s in England to convert to Academies by 2020 (or 2022, in some reports).

Some observers credit this particular U-turn with the ‘blame’ for raising the spectre of a revival of the widely dreaded Caedmon/Eskdale amalgamation – just when many parents and children were tentatively celebrating the ruination of Children & Young Peoples’ Services (CYPS) best laid plans.

But readers who smirked over the Enquirer’s recent “What Did I Tell You?” photoon (see below) on the subject of the Caedmon/Eskdale schools amalgamation will be less than surprised by news reported on the Yorkshire Coast Radio website (10th May 2016) that the ‘suspension’ of the merger may itself have been U-turned, firmly placing amalgamation back on the agenda – business as usual. 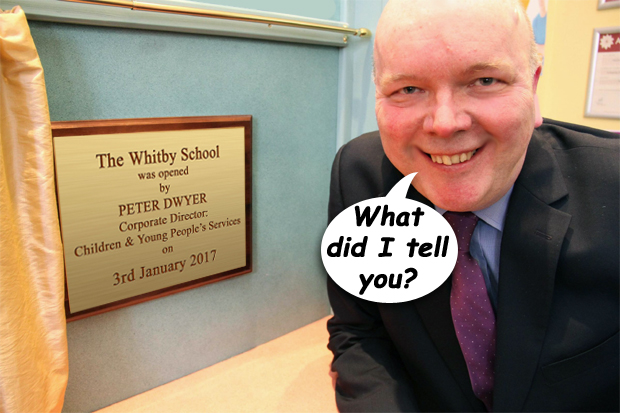 “I would want to see the detail of what is proposed before commenting further, but I welcome the fact that the Secretary of State has listened to our concerns and seems prepared to recognise that good or outstanding schools, at least in North Yorkshire, should be able to make decisions for themselves whether they become academies or remain with the local authority.”

I doubt that regular readers will have missed Arthur’s neatly occluded caveat – “good or outstanding schools . . . should be able to make decisions for themselves”.

This caveat raises some interesting questions, not least because Caedmon College Whitby (CCW) has yet to receive an OfSTED rating, having thus far escaped the attentions of the OfSTED inspectors. As matters stand, it cannot be said that CCW falls within the category “good or outstanding”.

What we do know is that, prior to the amalgamation of Whitby Community College and Caedmon School, the most recent OfSTED ratings for the two schools were Good and Requires Improvement, respectively.

By any reasonable reckoning, that must surely add up to ‘Something Less than Good’.

It is difficult to see how Caedmon College Whitby (CCW), comprising two now-defunct schools whose mean rating already falls below Arthur BARKER’s (or Nicky MORGAN’s) “good or outstanding” threshold, could possibly achieve that threshold when it is amalgamated with Eskdale School, whose most recent OfSTED rating was Requires Improvement – ‘Something Less than Good’ plus ‘Requires Improvement’ cannot conceivably amount to “good or outstanding”.

And this ad hoc calculation fails to take into account the likelihood that, given the grave Safeguarding concerns now darkening the CCW horizon, even a new ‘ahead-of-schedule’ OfSTED inspection of CCW will be hard-pressed to exceed a ‘Requires Improvement’ rating.

OfSTED ratings, of course, cannot be relied upon to provide an objective assessment of a school’s performance. Most education sector professionals regard OfSTED ratings as being susceptible to a considerable degree of inaccuracy – not least because, even with only two or three days notice of the coming of the inspectors, steps can be taken to ’tilt the playing field’.

At the end of January 2014, a week or so after OfSTED’s inspection of the now defunct Caedmon School, but well before the Report was concluded and published, information came to light that the inspection may have been compromised by a rather devious substitution of teaching staff. Word had apparently leaked out from Caedmon School that one or two of the less impressive teachers had been given leave of absence over the period of inspection, and surreptitiously replaced by ‘star performer’ teachers from another Whitby School, with a view to obtaining a better OfSTED rating for caedmon School than was actually merited. Even with the assistance of this alleged subterfuge, Caedmon School still only rated Requires Improvement. Without those ‘star performers’, an ‘Inadequate’ rating might all-too-easily have been handed down.

The parents of one Caedmon School student, clearly finding the leaked information entirely credible, wrote to OfSTED to inform the inspectors of the apparent skulduggery.

I have now been made privy to a copy of that letter, a scan of which I reproduce here, redacted to protect the, erm, innocent: 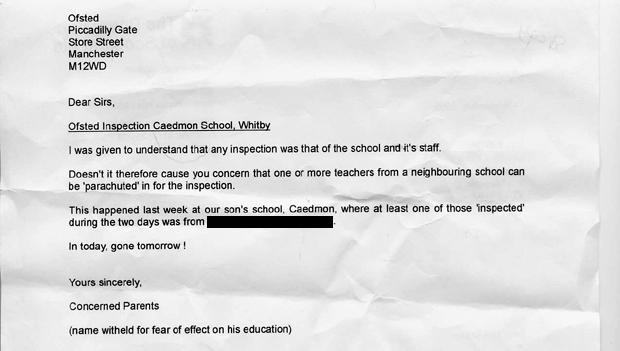 On 20th April 2016, I offered the Chair of Governors of the school whose name I have redacted a ‘right of reply’ opportunity to comment on the content of the letter:

The Chair of Governors has ignored my offer.

On 20th April 2016, I also lodged a Freedom of Information request with OfSTED, seeking to confirm that they had indeed received the letter.

As I anticipated, OfSTED has evaded disclosing that information, stating:

This is nothing less than comical for two reasons.

Firstly, confirmation of receipt of the letter cannot in any way be prejudicial to inspection activity at Caedmon School because there can be no further inspections at a school which no longer exists.

And secondly, I have now learned that copies of the letter were posted to three other recipients at the same time as the letter to OfSTED for control purposes (see above) – all of which arrived the following day. There is no reason to believe that OfSTED’s copy went astray.

‘Transparency’, it would seem, is a label with no referent.

And speaking of ‘transparency’, I am reminded of an interview with a Whitby teacher, whose identity I have no immediate intention of disclosing.

Is that not a case of me being less than transparent? I think not; I would not like to put any transparent public servant’s job at risk. Here is the relevant section:

Teacher: Anyhow, I’ll be surprised if you get anything out of [name redacted] … he’s, er, … he come in shouting “Open traffic” – I told you, didn’t I? “Management that’s open and transparent”?

(And if called upon to validate that transcript in a court of law, I will be happy to provide conclusive evidence).

Readers will not be slow to arrive at the obvious conclusion: the integrity of the administration of schooling in Whitby is very far from being beyond challenge.

This is the backdrop against which the decision-making is playing out. Skullduggery and duplicity. Business as usual. 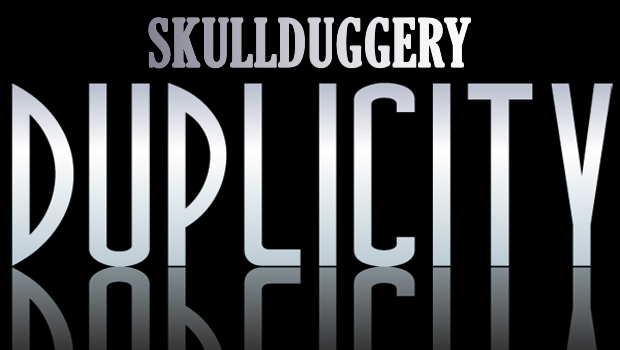