When the topic of Safeguarding in schools arises, one’s first thoughts turn to children as victims of one or another form of abuse. But increasingly, in recent times, teaching staff have also found themselves victims of verbal and physical abuse.

Few, in or out of the education sector, will forget the shocking news, on 28th April 2014 that Ann MAGUIRE, a highly regarded teacher of Spanish of some forty years experience, had been stabbed to death in the classroom by one of her own pupils, William “Will” CORNICK, at a Roman Catholic school in Leeds.

As the Yorkshire Post article points out, it is almost invariably the case that when a murder has taken place, a Coroner’s inquest is opened and then suspended, pending Police investigation, prosecution and conviction. Will CORNICK was found guilty of the murder and received a sentence of twenty years imprisonment.

Following conviction, it is most unusual for such an inquest to be re-opened, on the basis that all salient facts have received a public hearing in open court.

However, exceptional circumstances occasionally necessitate a further examination of the circumstances surrounding the death. This was such a case.

The Leeds Safeguarding Children Board (LSCB) conducted a Learning Lessons Review (LLR) into the circumstances surrounding the murder of Ann MAGUIRE and Lead Reviewer Nick PAGE – Chief Executive Officer of Solihull Metropolitan Borough Council (and formerly of Knowsley Council, Merseyside) – duly published his Report. Mr Don MAGUIRE, widower of the victim, was far from alone in the belief that much had been omitted from the Report.

The Mail Online, in an article entitled “Family’s fury at ‘gagging order’ after teacher is killed at school: Claims ‘wall of secrecy’ has hidden full details of murder of Ann Maguire”, Mr MAGUIRE is quoted as stating:

‘We have had some information through the police on a continuous basis but it’s incomplete and our understanding of the situation is incomplete, but official bodies such as Leeds City Council, the school, the church have not given us a full version of what has happened.’

With those words – “not given us a full version” – regular readers will now discern that we are about to encounter the territory of a familiar ‘hobby horse’ of mine – reputational management.

The following excerpt from a Guardian article of 8th November 2016, entitled “Ann Maguire murder could not have been foreseen, review finds” highlights good grounds for the MAGUIRE family’s concerns:

That second paragraph beggars belief. Everybody with whom I have spoken asserts that the threats were widely discussed at the school, but Nick PAGE asserts that “no warning signs had been known to staff or other agencies at the time”. Perhaps they were all playing golf at the time.

In his defence, Nick PAGE (pictured below) was only appointed as Lead Reviewer on 13th October 2015, much of the groundwork having been laid out, from the inception of the Review in March 2015, by his predecessor in that position. 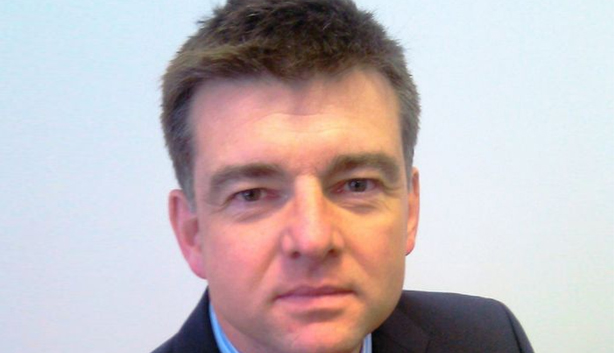 All of the foregoing has been widely reported in the national press. However, one element of the case has escaped media attention – the name of the original Lead Reviewer, who walked away from the task in August 2015 and from whom Nick PAGE inherited the material and general ethos of the Review.

This information came to me through the following FOIA response on the WhatDoTheyKnow.com website, where the response can be read in full (follow the URL-link).

The passage of particular interest to North Yorkshire readers is shown below: 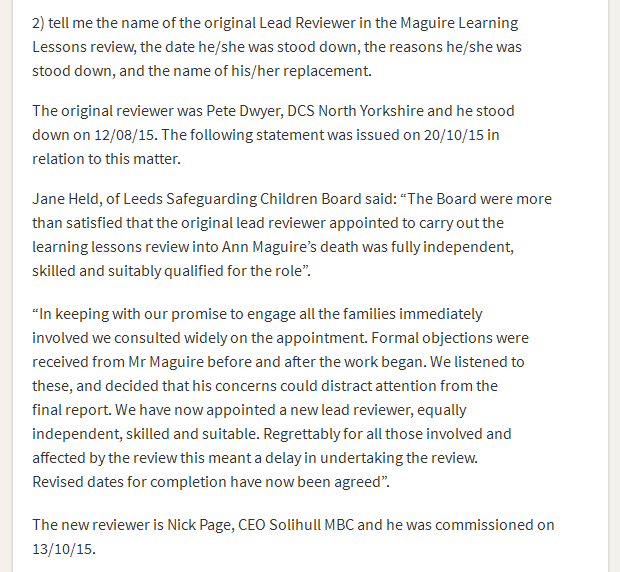 Nick PAGE’s predecessor was none other than North Yorkshire’s very own Pete DWYER.

The announcement that the Coroner’s Inquest is to be re-opened, with a jury empanelled, will encourage speculation that the anticipated judicial criticism of the Learning Lessons Review may have provided the prime motivation for the unexpected ‘retirement’ (reported on the Enquirer here) of NYCC Corporate Director: Children & Young People’s Services Pete DWYER, at the very zenith of his career.

The Witness Box is no place for spin-bowling.

Remembering that whatever Lead Reviewer Nick PAGE found had first passed through the hands of his predecessor, it would seem to be the case that Pete DWYER either sanitised the paper-trail, or concluded that Safeguarding procedures were wholly inadequate – and acted accordingly. The latter, of course, would be an unthinkable admission and therefore prime material for a campaign of reputational management.

DWYER had been appointed in response to Mr MAGUIRE’s request for the appointment of a Leading Reviewer from a remote authority with no personal allegiances to any of the parties/agencies connected with the murder. However, in an article published in the York Press on 11th January 2013, clear grounds for DWYER being a hopelessly unsuitable appointment became apparent:

DWYER was subsequently stood down when it became known that the (then) Secretary of State for Education Nicky MORGAN had expressed concerns.

However, it is my information that DWYER was removed from the position on 12th August 2015 (as confirmed in the LCC FOIA response, above) though Nicky MORGAN was first involved in late September 2015, a couple of weeks before Nick PAGE was appointed to DWYER’s position – vacant since 12th August 2015. Oh, what a tangled web we weave . . .

Right-thinking members of the public may wonder why any paid public servant would be willing to compromise her/his integrity (or what is passed off as integrity) to deprive a widower of a fair investigation into the brutal murder of his wife.

Certainly, there would be an element of natural justice should it turn out that Pete DWYER, the doyen of reputational management, has ended up the victim of a large-bore back-fire of his own making. 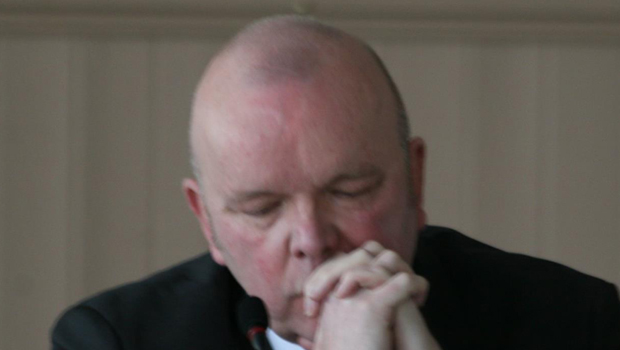 The name ‘Pete DWYER‘ does not appear in the Learning Lessons Review for which he was the original Lead Reviewer: