Regular readers of the NYE will know that we have been covering the investigation into the allegations of paedophilism against Sir Edward Heath, which are being investigated by a number of police forces led by Wiltshire Police.

Our interest in this investigation arises from the publication of a photoon on January the 3rd 2015, showing Sir Edward Heath meeting local paedophile Peter Jaconelli in Scarborough (see above). When the news that Sir Edward Heath was being investigated broke, this led to comment in the Daily Mail on the 6th of August 2015. I commented on this in a Letter to the Editor in August 2015, making the point that so far as I was aware, there was no evidence of any offending by Mr Heath in Scarborough.

Subsequently, on the 28th of January 2017, the Sunday Mail published an article entitled “The Hounding of Ted Heath”, which complained about the cost of the investigation code named Operation Conifer and poured scorn on its conduct. It failed to mention that a full investigation into the allegations is in the best interests of Mr Heath’s reputation, because if as the article implies there is no truth in the allegations, Operation Conifer will exonerate Mr Heath.

The media criticism prompted an unprecedented response from Chief Constable Mike Veale of Wiltshire Police in which he emphasised his determination not to buckle to “unacceptable” media pressure and to conduct an impartial investigation:

Full statement and NYE comment on the implications of this case for police media relations here.

I had hoped this would be the end of media speculation and that Wiltshire Police would be able to conduct the investigation without interference by the press.  However: 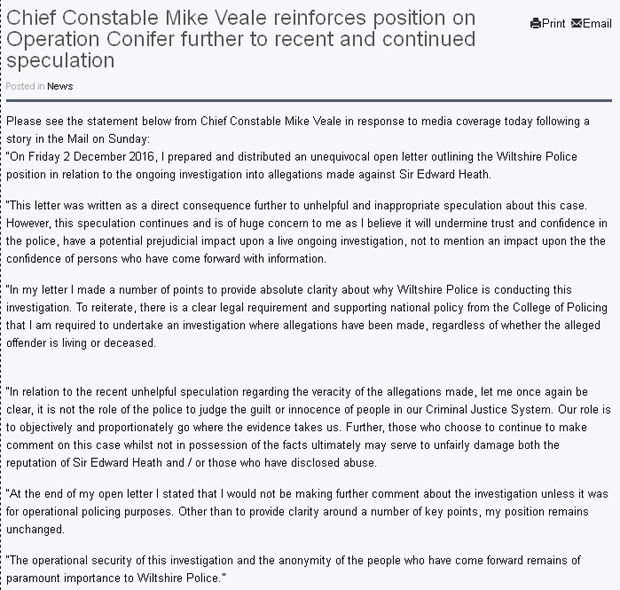 In his statement (which refers specifically to the Mail on Sunday article), Chief Constable Mike Veale emphasises that the on-going speculation about Operation Conifer is continuing and causes him concern because he believes it will “undermine trust and confidence in the police, have a potential prejudicial impact upon a live ongoing investigation, not to mention an impact upon the confidence of persons who have come forward with information”. Further, those who choose to continue to make comment on this case whilst not in possession of the facts ultimately may serve to unfairly damage both the reputation of Sir Edward Heath and / or those who have disclosed abuse. “The operational security of this investigation and the anonymity of the people who have come forward remains of paramount importance to Wiltshire Police.” 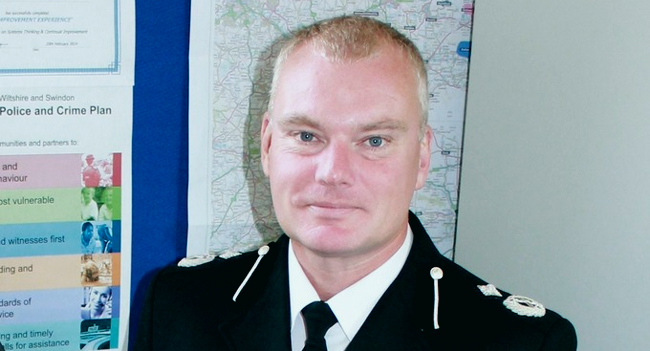 During the course of Operation Conifer, I received a request from Wiltshire Police to assist in their investigation into Sir Edward Heath in my capacity as North Yorks Enquirer Crime and Parliamentary Affairs Reporter. I was interviewed at Swindon Police Station about various aspects of Sir Edward Heath’s life and the meeting with Peter Jaconelli referred to above. Obviously being a journalist I was anxious to get any information I could from the officers that interviewed me on the progress of the investigation. I listened very carefully and started by asking a few innocent questions after a while to try and get them to open up. However, they played their cards close to their chests and didn’t give anything away. They emphasised that it was a confidential and sensitive investigation essentially reflecting the views of the Chief Constable above. It was very frustrating.

I was therefore very surprised that the Mail on Sunday was able to obtain access to multiple informants in Wiltshire Police, who apparently operate at such a senior level in the police service that they can comment authoritatively on what the Chief Constable’s view about the operation is, before the investigation has even been completed.

In my last article:  The Ted Heath furore:  The Police and the Media I stated that the NYE will continue to monitor Operation Conifer and keep our readers informed of progress, but in a responsible way, as our readership would expect.  My view remains that Operation Conifer reveals a key conflict between the media and the police.

On the one hand, the media has to hold public bodies including the police to account, for instance concerning large amounts of public money spent on historical investigations. But there is also an overwhelming requirement to do nothing that will prejudice an on-going police investigation, or cause distress to victims of crime. This is particularly true in sensitive historical investigations into child abuse, when the police are appealing for victims of sexual abuse to come forward to them, so the perpetrators can be brought to book.

In this case, the Mail on Sunday has published an article based on un named sources, which has led to additional comment by other national papers based solely on the Mail on Sunday article. This follows on from another Mail on Sunday article in which it questioned if there was any basis for the investigation to continue and alleged that some allegations were fantasy. Obviously the possibility of being the subject of press criticism will deter victims from coming forward. The time for these questions is once the investigation has been completed.

If, like Operation Midland, Operation Conifer transpires to have no basis at all, then there may be a case to criticize the handling of the investigation. This will only emerge once the final report is issued and the Chief Constable feels able to make a full statement.