On the evening of Tuesday 7th March 2017, Whitby Town Council (WTC) convened the most recent of its regular monthly meetings.

Many Councillors sought to excuse this entirely inappropriate remark on the grounds that poor Noreen has anger management issues. Not ‘alf.

It is with great sadness that I must now report that the Mayor of Whitby, Councillor Noreen WILSON [Lab.], appears to have lost her battle with what I refer to (if only to myself) as “gavel rage” – that well known symptom of sociopathy, prevalent amongst those whose perception of ‘power’ contains no sense of public service; rather, an unshakeable belief in personal omnipotence.

Readers may more readily recall the name of Ron WILKEY, whose eloquent explication of the case for a No Confidence vote must surely have been a factor in the deliberations of both WTC on 7th February 2017 and Filey Town Council (FTC), on 13th February 2017.

Ron WILKEY attended WTC last night to express his thanks to the Council for their Vote of No Confidence in the Leader at SBC, Councillor Derek BASTIMAN [Con] and his Cabinet of seven Portfolio Holders, and to express his views on the letters sent by Councillor BASTIMAN [Con.] and CEO Jim DILLON. These letters are reproduced at the foot of this page.

Ron WILKEY has provided a statement regarding what took place last night and I can confirm that everything Ron states has been corroborated by other witnesses, including a Scarborough Borough Councillor.

Thanks for meeting me tonight after the Whitby Town Council farce.

I arrived a few minutes late and mouthed my apologies, as the meeting started at 6.45pm not 7pm as I had thought.

They were on Item 3 on the Agenda;

and then went on to Borough Council reports from Cllrs Barnett and Dennet respectively. This led to a couple of questions on those reports.

I was 3rd to speak. I introduced myself and again proffered apologies for being late, then thanking Councillors for the hospitality shown when I attended the Full Council meeting on 7th Feb 2017.

I thanked them for the votes of No Confidence then, but said that the letter received in response from the CEO and the Leader of SBC was;

a) a thinly veiled threat, and also

b) was in a form of words identical to the letter sent to Filey Town Council, whose motion to vote included in The Leader, The Cabinet and the Chief Executive Officer of Scarborough Borough Council.

I said I thought that the reply was ill-conceived as a general reply which could be sent to any Town or Parish council and was, as usual, ignorant.

I then asked a question directed to Cllr Trumper as to why he did not declare and interest, being a Borough Councillor, and step away from the vote. The Mayor then instructed him that he didn’t have to answer. Which he didn’t. I said my thanks and sat down.

The meeting continued as per the Agenda until Item 7;

b) Letter from the Chief Executive and Leader of the Council.

It was at this point that The Mayor asked the Council what, if any, or how, should they reply. A lively debate ensued with a lot of sighs and put-downs in the direction of Cllr Havelock. I felt strongly that he was wasn’t being understood or treated with respect, and especially when Cllr Jennison said about an earlier remark and that this was exactly why they have No Confidence. Cllr Havelock agreed that that had formed part of his motion to vote on the 7th February. Another Cllr said it wasn’t, but Cllr Havelock insisted it was.

The Mayor said they would debate it no longer, under the 6-month rule. It was then that I had to say something, as a point of order in defence of the wording of the motion, as they were all discussing a response to Scarborough Borough Council – the entire institution – when, in fact, the motion specified No Confidence only in the Leader and the Cabinet. Most Councillors seemed unable to grasp this fundamental distinction.

I know I shouldn’t have spoken out while Standing Orders were in effect, but I said what I said in the public interest. The public cannot be well represented by the Council fumbling about in the dark. I also offered that, if I was asked to leave, then I would do so. I tried to continue but was then bellowed at by The Mayor to “Shut up!”. The Mayor then slammed her hands on the table with a loud report and walked out, saying she was suspending the meeting.

There was no need, as I had made clear that I would have left the meeting if the Council so wished.

The Clerk came over to me and I asked her not to speak to me as if I was a naughty school-child and that I was 68 and she should show me some respect.

She said I abused the Mayor, which I did not.

As members were getting their coats on and leaving, I was reminding those around me that they had the wrong end of the stick and didn’t understand the vote was NOT about Scarborough Borough Council in its entirety as many of then believed.

I flippantly said, “Well, you’ve got a early night”. A few said that they were disappointed the meeting was suspended as there were still some important things to debate.

It was then that The Mayor approached me and told me to “Go home. You’re a knob”. I asked her to repeat her remark and again she called me a “Knob”. I called to Cllrs Havelock, Barnett and Dennett to be witness to The Mayor using rude expletives.

I left the Council Chamber saying no wonder the Borough has no regard for Whitby Town Council if this is the way Democracy works in Whitby.

It is worthy of note that Whitby Town Council video-records its meetings – although long-standing readers of the Enquirer may recall that the Whitby Town Clerk, Mrs Pam DOBSON, has been known to ‘mislay’ recordings, as she did when she was Clerk to Marlborough Town Council, where her successor (following her humilating departure), Mr Liam COSTELLO, had this to say:

“Mrs Dobson’s actions, as several councillors have suggested, could have been passed to the police for investigation, as a mis-use of public office and a possible offence under the Fraud Act”.

In the ensuing court action, Judge SIMPSON, who led the Tribunal, said:

“She was at times evasive in her answers, and overall, we were unanimous in having concerns as to her credibility.”

Complaints against Councillor Noreen WILSON [Lab.], both to the Council and to the Labour Party, over the “Shove your camera up your arse” incident were not upheld.

It is eminently possible that complaints both to the Council and to the Labour Party in respect of Noreen’s latest eruption will be brushed under the carpet, too.

In my view, it is high time a Councillor of Ian HAVELOCK’s calibre, perhaps with the support of Councillor Terry JENNISON (who was the Seconder of Councillor HAVELOCK’s ‘No Confidence’ motion last month) prepared a form of words for a motion of NO CONFIDENCE in Mayor Noreen WILSON to spare the Council any further descent into disrepute. There are rumours, too, the Clerk Pam DOBSON has spoken of imminent retirement. One hopes that she will not apply for the vacancy at Fiely Town Council, where the Town Clerk, the exemplary Mrs Gina ROBINSON, has already announced her retirement.

It would appear that the more we strive for transparency in local governance, the clearer is the picture we obtain of dishonourable conduct, arrogance, ignorance, rank stupidity and kindergarten farce.

The following textually identical letters from SBC CEO ‘Silent’ Jim DILLON and Leader Councillor Derek BASTIMAN [Con.] to, respectively, Filey Town Council and Whitby Town Council are not only arrogant to the point of insolence, the latter is entirely inappropriate – since the WTC motion of No Confidence made no reference to the CEO who, on this occasion, had no business appending his name to a document that was none of his concern.

Letter from SBC CEO and Leader to Filey Town Council 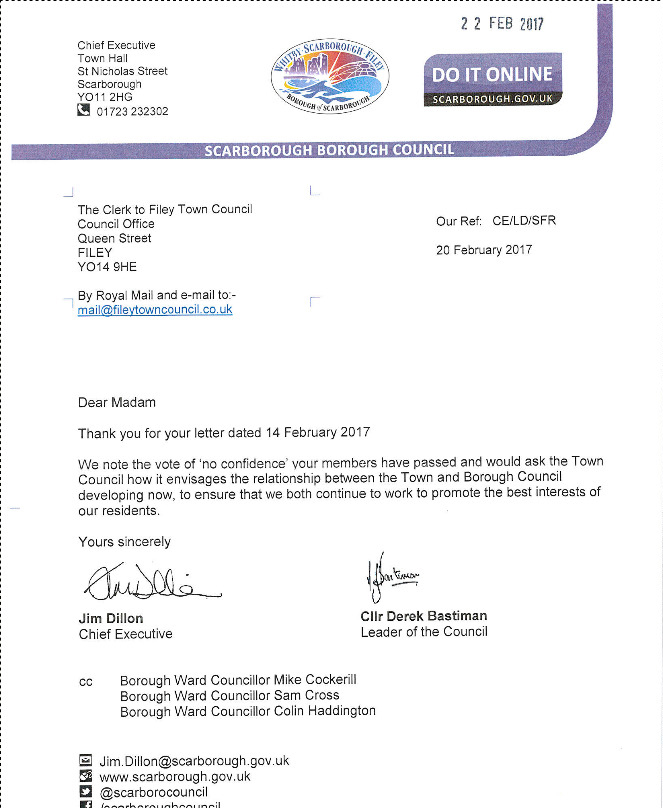 I expect members of Filey Town Council to have no difficulty in formulating a response to the CEO and the Leader, along the following lines:

The Town Council envisages the relationship between the Town and Borough Councils developing in a way that ensures that both continue to work to promote the best interests of our residents through the good graces of those Officers and elected members in whom the Town Council does have confidence.

Letter from SBC CEO and Leader to Whitby Town Council 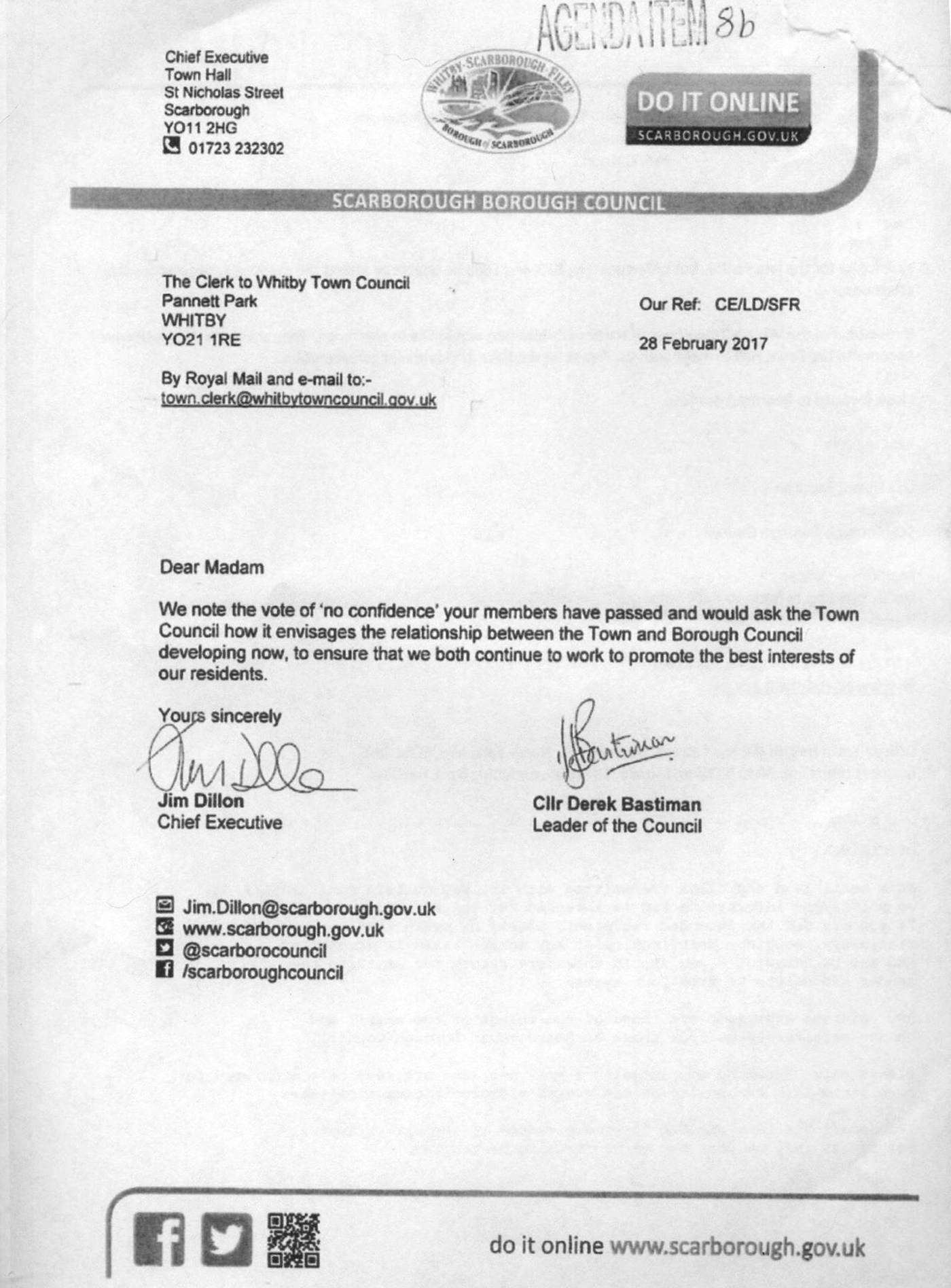 Last night, members of Whitby Town Council proved themselves incapable of understanding their own motion, much less of formulating a response, which must surely take the following form:

The Town Council envisages the relationship between the Town and Borough Councils developing in a way that ensures that both continue to work to promote the best interests of our residents through the good graces of those elected members in whom the Town Council does have confidence.

It is unclear why, after twelve years of silence, the Chief Executive has chosen to insert himself in a matter in which he plays no significant role.

Of course, a less burdensome response – from both Town Councils – would be simply to refer the Chief Executive and/or the Leader to Arkell -v- Pressdram. 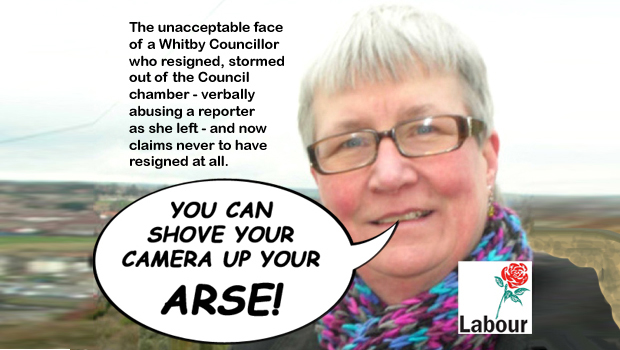