A number of former Councillors and retired Police Officers have expressed to me the opinion that, in the fullness of time, the infamy of Peter JACONELLI’s predatory abuse of youngsters in and around Scarborough would gradually be diluted and the former ‘pillar of society’ would regain his ‘rightful’ position as a respected contributor to the life and wellbeing of the Borough.

I confess to having found this prediction far beyond the limits of credibility.

On 21st November 2015, I published an article here on the Enquirer reporting on the extraordinary remarks passed in the Members’ Room at the Town Hall by Councillor John NOCK [Con.], (recently appointed to the Cabinet Portfolio for Strategic Transport, Transport Services and ICT).

Readers may remember that Councillor John NOCK escaped any form of sanction through a semantic device dreamed up by SBC Monitoring Officer Mrs Lisa DIXON, who informed the Standards Committee that whilst SAVILE clearly was a “paedophile”, JACONELLI was ‘merely’ a “hebephile” (one whose sexual predilections are constrained to the 11-14 age group) – in other words, according to Mrs DIXON’s form of pedantry, Councillor NOCK was, in some bizarre sense, strictly correct in the distinction he made between SAVILE and JACONELLI. Quite how Mrs DIXON could be so certain that none of JACONELLI’s victims was under the age of eleven is a matter for conjecture . . . perhaps she asked a retired Scarborough Police Officer and personal friend?

In fact, this was the second occasion on which a Scarborough Borough Councillor had spoken out in defence of JACONELLI – the first occasion being when Councillor Bill CHATT [Ind.] vigorously defended JACONELLI in Full Council when he voted against the otherwise unanimous decision to strip JACONELLI of all official recognition of his former positions as Mayor and Alderman of Scarborough. (Councillor CHATT is presently the Portfolio Holder for Public Health and Housing).

Nevertheless, Peter JACONELLI was stripped of his civic honours:

Councillor Tom FOX: “We don’t describe him as the former Mayor of the Borough”.

The Resolution stripping JACONELLI of his civic honours, Proposed by Councillor Tom FOX [Con.] and seconded by Councillor Derek BASTIMAN [Con.], was passed in Full Council on 12th May 2015 – and was absolutely unequivocal: 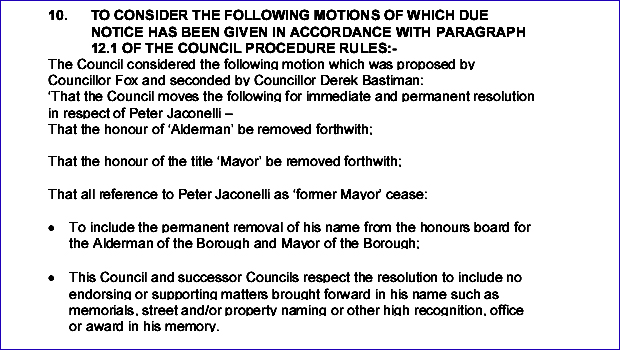 “That the honour of the title ‘Mayor’ be removed forthwith . . .”

The image below shows the Scarborough Borough Council honours board listing past Mayors. As can be seen, following the above Resolution the entry ‘1971-1972 PETER JACONELLI’ was duly erased from the list  – leaving an ominous gap between ‘1970-1971 GEORGE FREDERICK HODGSON‘ and ‘1972-1973 IDA CARTWRIGHT SLARKE B.A.’. 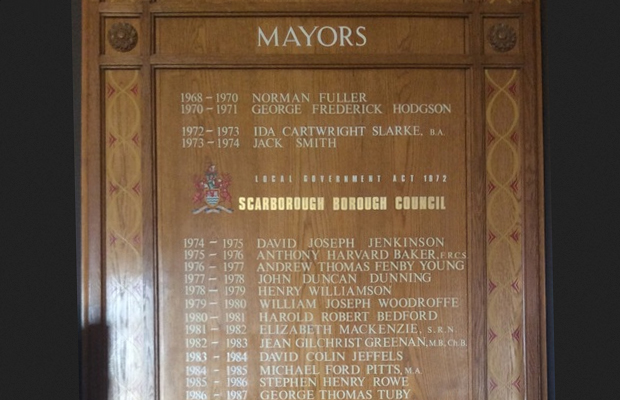 However, unlike NYCC Leader County Councillor Carl LES [Con.] and NYP Assistant Chief Constable Paul KENNEDY, successive SBC Leaders Councillors Derek BASTIMAN [Con.] and Tom FOX [Con.] have steadfastly declined repeated requests for an apology on behalf of the Council to the victims/survivors of Peter JACONELLI in respect of the Council’s patent failure in its Duty of Care.

There would appear to be an extremely unwholesome tolerance on the subject of predatory paedophile Peter JACONELLI amongst certain elements in the Cabinet.

Could there really be any truth in the suggestion that the rehabilitation of the memory of Peter JACONELLI is already under way?

Up until a few days ago, when I was provided with this ‘live’ URL-link for the Scarborough Borough Council website, I could never have believed that this most emphatic decision could conceivably be subject to dilution or disregard. But there can be no doubt about it – Peter JACONELLI is back on the list of Past Mayors on the SBC web-site (see the featured image at top of this page).

Will we, in the fullness of time, see ‘1971-1972 PETER JACONELLI’ reappear in gold leaf lettering on the honours board?

Or is this just another classic example (as will no doubt be the ‘excuse’ – lame as it is) of the monumental incompetence and crass insensitivity for which SBC has become a by-word?

Perhaps some of our Councillors would like to ask the Portfolio Holder for ICT – paedo-apologist Councillor John NOCK [Con.] – how it can be that the name PETER JACONELLI now appears on the SBC web-site. I am sure he can be relied upon to get to the truth – just as he did when overviewing the Ben MARRIOT fraud and corruption allegations.

[Note to Lisa: Sarcasm does not fall under any statutory prohibition].