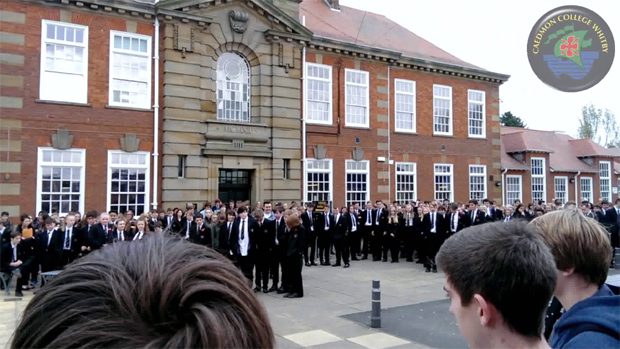 A Letter to the Editor from an ex-pat from North Yorkshire, Win SMITH, crystal-ball gazing on the subject of Caedmon College Whitby, where OfSTED has recently conducted an Inspection.

Over the past several years, CCW have not reached their own internal targets and consistently flat-lined at around 60% on average.

This means year-on-year approx 40% of students leave without A to C in English and Maths!

When you look at the performance tables for North Yorks, CCW is in the bottom 30% and the DfE 2016 information shows the school to be average in all measures.

So how, you may ask, can the Head suggest to staff after the latest inspection (last week) that they would all have a smile on their faces when the report is published in a couple of weeks time? Presumably that means at least ‘Good’? At present, CCW has not been inspected since the amalgamation of Caedmon School (who, as you may remember, were close to special measures a couple of years ago) with WCC, who were deemed to be ‘Good’. But some of the circumstances, such as getting in specialist teachers and suggesting some pupils did not attend, whilst known by the community obviously were unknown to OFSTED and were perhaps not standard practice but GAMING.

When OFSTED announced their visit last week, the Headteacher was away on the school ski trip. He flew home (who paid?) but more alarmingly, this was not an educational trip and it was in term time! As the Head apparently did not return to the trip post inspection, it can only be assumed that he just went there to ski and twitter. CCW has a policy that states an absence such as this kind of trip would be deemed to be unauthorised absence for students. Seems a bit hypocritical, then, for the Head, who must have been given permission by the Governors, to go on this trip.

Generally speaking, a Section 5 full OFSTED lasts 2 days and verbal feedback is given to senior leaders. In order to help them make decisions, input is given by a variety of people including the Head and parents/carers. I am told that 30%+ of parents/carers said they would not recommend CCW to others. That’s quite a lot!

Clearly, the Head knows all the wrinkles in order to GAME the outcome – otherwise why did he come back with such haste? This has obviously paid off. At this point, I think it is only fair to congratulate teaching and support staff for doing their bit. However, they won’t get any glory – just more cuts & P45s in the years to come.

This does fit into the wider picture for North Yorkshire, particularly the coastal area. As readers will be aware, Peter Dwyer is retiring early. However, he will have a large pension paid for by the taxpayer. The results on the east coast are shocking. Hence, I suspect, his decision. In many other jobs he would have been sacked. I am sure he will surface again in another highly paid educational capacity paid for by you and me. I am sure he did some good stuff – but not in education and not on the east coast.

The Regional Schools Commissioner Janet Renou – bottom of the league of 8 RSC’s (schoolsweek) – is also in the mix. She earns at least £120k but I suspect you have neither heard of her or know what she does. (I am not sure, either!) What I do know is that she is responsible for helping schools to join with other ‘Good to Outstanding’ schools to form Multi Academy Trusts (MATS). Eskdale wanted to do that with Rodillian MAT, who have a great track record, but somehow it does not seem to be happening properly. I wonder why? As NYCC has not provided any worthwhile input to help Eskdale out of RFI, Rodillian seem a much safer bet.

Now let me do a little crystal ball gazing:

Very neat and cost saving, but not good for students and the community.

However, if this happens you need to ask yourself a couple of things such as:

Where does the money go? CCW is very top heavy. Head of CCW, RSC and Dwyer (or his replacement) averaging £100k each between them. All have well paid deputies. Money for what, you may ask?

What is certain is that the student achievement is NOT important, no matter how they care to dress it up.

What is also clear is ‘Good’ is not ‘Outstanding’; that, I am afraid, will forever elude the current Head of CCW.

But never mind. All these people need poorly educated students in low skilled jobs to serve them tea and fish and chips.

I hope I am wrong but all the malarkey that has gone in Whitby for many years suggests otherwise.

This community deserves better. Will it get it? Up to you now!