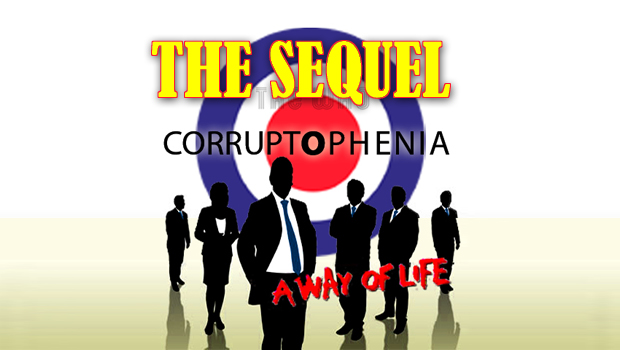 Over two-and-a-half years ago, on 14th July 2013, I published an article under the title: “Corruptophenia” – a Three-Act Ploy.

The article was presented in the form of a ‘treatment’ (or outline) for a prospective movie about systematic corruption in a strictly fictional local authority.

To avoid any suggestion that I was covertly referring to real people or real events (heaven forbid!), I deployed the following dramatis personæ: 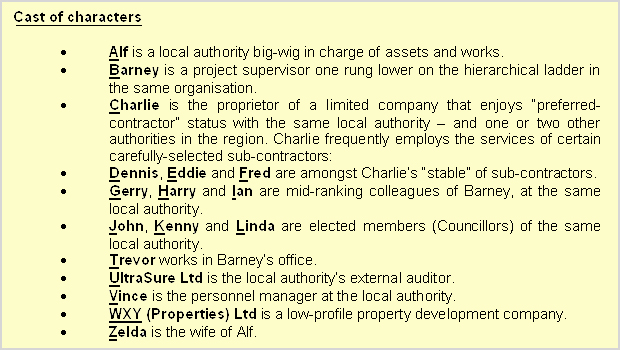 I have underlined the initial letters of each of the ‘players’ to provide a simple alphabetical reference to the ‘Who’s Who’ of my purely fictional narrative.

By an extraordinary quirk of circumstance, I can now reveal that my work of fiction has been running in close parallel with true-life events at Scarborough Borough Council (SBC). Astonishing!

My present information is sufficiently detailed to enable me to substitute the real names and positions of a number of the main ‘players’ – some of whom have already been identified by an internal investigation at SBC, with addional insights from Veritau Ltd, yet no public announcement has been made regarding long-running corruption amongst staff in the Technical Services department in collusion with a number of local contractors.

Some of the main ‘players’ have already ceased their involvement with SBC – voluntarily or otherwise, permanently or otherwise, but apparently without their corrupt activities being reported to the Police.

All in all, it is beginning to appear as though SBC has taken three years to pick the bones out of a burgeoning scandal that was handed to them on a plate – such is their reluctance ever to admit that anything could be less than wholesome in Europe’s most enterprising town (2009).

I have been attempting to “blow the whistle” on wrong-doing at SBC for some years now. My attempts (and successes) have always been unwelcome at the Town Hall, where the exposure of the “Me Too!” scam, the ‘double-dipping’ scandal and (most of all) the Peter JACONELLI paedophilia cover-up has caused acute consternation and some high-profile departures.

It is almost as though the mandarins would infinitely prefer the wrong-doing to proceed, unhindered by meddlesome members of the public, so that  no word of wrong-doing ‘leaks’ into the public domain, for that would confirm that corruption is a fact of life at SBC – and the Enquirer was right all along.

An explanation is long overdue as to why attempts to “blow the whistle” on wrong-doing at SBC invariably and inevitably result only in hostility towards those “whistle-blowers” who report clear suspicion of fraud and theft of Council materials, man/hours and plant. The SBC key policy is clearly one of “shoot the messenger”.

And now an internal SBC “whistle-blower” has been forced to resign, bullied out of his job for reporting the truth behind my “Corruptophenia” article.

However, the “whistle-blower” has declined a buy-off and is resolutely determined to take counter action through the courts.

There is no way on earth that SBC can prevent the whole tawdry story featuring in the national press. Unsurprisingly, there are senior Officers and Councillors who are exceedingly anxious to suppress the matter. Why?

As one long-term employee of the Council put it:

“From their perspective, as long as the public remains in the dark about the truth, who cares what nonsense they peddle, eh? And who gives a flying flock about the bachelor pad under the hill? Do the Bartman – just like Michael Jackson!”

No doubt SBC Director of Legal & Democratic Services Mrs Lisa DIXON will be in no doubt as to the meaning of these very cryptic remarks . . .

SBC’s  determined hostility to “whistle-blowing” – either by members of the public or employees of the Council – engenders the compelling suspicion that the corruption must extend into the higher reaches of the organisation. Why else would they be so determined to shoot the messenger and “terminate” reliable sources of accurate information?

I have seen the future and it is expensive. Readers (and Officers and Councillors of SBC) may find the following news report instructive: http://www.bbc.co.uk/news/uk-england-northamptonshire-31698003

“According to legal papers, Mr Redfern [Corby Borough Council’s Head of Property] reported concerns about a number of “unethical” land deals to the council in August 2011 and then to the Audit Commission two months later.

Northamptonshire Police has since launched an investigation into the council’s financial dealings.

Mr Redfern said he was “bullied” after raising his concerns, with council officers talking “about putting nails in my coffin”.

He was signed off work on 12 November 2012 with “depression and anxiety”, having had suicidal thoughts.

In a BBC interview, Mr Redfern said whistle-blowing was a “sure way to terminate your career”.

It may not be coincidental, of course, that we encounter that word “terminate” once more in a Council’s vocabulary – after all, many of them share a common purpose.

Hitherto, I have always associated the word “terminate” with the silencing techniques employed by organised crime, otherwise known as the Mafia – or ‘the Mob’. It makes one wonder what Councillor Tom FOX had in mind when he spoke of “threats or retaliation”.

Hopefully, Scarborough Borough Council will now bow to the transparency imperative and issue a public statement to the effect that grave suspicion of wrong-doing has been detected (with a little help from the Enquirer) in the Technical Services department and that those involved have now been reported to the North Yorkshire Police.

But the Enquirer’s  Tim THORNE tells me that he has thrice asked North Yorkshire Police to confirm (or deny) that such a referral from the Council has indeed taken place – only to be referred back to SBC by the NYP Press Officer Greig TINDALL. 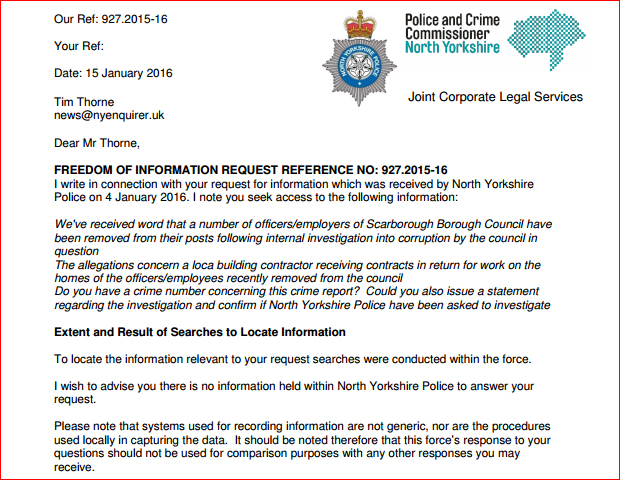 When paid public servants are strongly suspected of having acted corruptly or having in any way breached the public trust, is the public not permitted to hear of it? Is this not a matter of conspicuous public interest?

Is criminality on the part of paid and elected public servants a legitimate subject of secrecy?

Clearly, Scarborough Borough Council – or the handful of Officers and Councillors who control the Council – entertains a peculiar view of transparency. One of the primary tasks of the the free press is to convey to the wider public a true picture of the conduct of our ‘authorities’ – our all-too-secretive ‘authorities’ – our paid public servants.

I hope that readers are by now sufficiently curious about why Director of Legal & Democratic Servise Mrs Lisa DIXON attempted to “terminate” the Real Whitby Magazine   (in an attempt to silence me, Tim HICKS and Tim THORNE), then denied having done so, to begin contemplating what else ‘the Council’ may have lied about. (I will be disclosing new information about the abortive Lisa DIXON attempt in the very near future).

Some lies are lies of omission.

Some secrets are open secrets.

To see where the future lies on this particular occasion, allow me to direct readers to the outcome of this closely analogous case in Cardiff:

Mark my words; on top of the direct cost of the abuse of Council man/hours, materials and machinery, the Council Tax payers of the Borough will bear the cost of the compensation paid out to the bullied “whistle-blower”, as well as the Council’s own (and the “whistle-blower’s”) legal costs.

My guess would be that the Council’s intransigence will end up costing tax-payers in the Borough of Scarborough somewhere between £250-£500K for those legal costs. Not to mention the fact that the salaries, pension contributions, expenses and allowances paid out to these people are costing us all circa £1M per year. Every year. Best value for money?