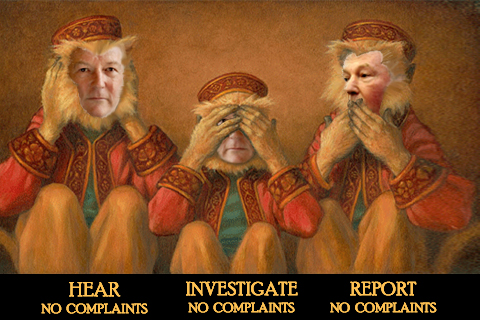 Were the context not so deadly serious, readers of Real Whitby could be permitted a wry smile at the extraordinary machinations of Scarborough Borough Council and its Leader, Councillor Tom FOX.

Having twice now succumbed to relentless pressure from Real Whitby to do the honourable thing by the victims of Jimmy SAVILE and Peter JACONELLI by striking those names from the honours list, Councillor Tom FOX continues to pursue a policy of ‘least said, soonest mended’.

Following widespread acknowledgement of Jimmy SAVILE’s horrendous paedophilia in the run-up to Christmas 2012, on 23rd February 2013 Scarborough Borough Council moved relatively swiftly to revoke the Freeman of the Borough status conferred upon SAVILE less than a decade earlier, in 2005. 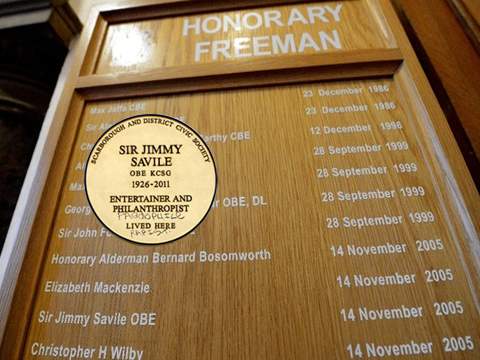 Cllr Fox said since the revelations came out, he had been subjected to “continued abuse, insinuation and false allegations” with regards to Savile.

He said: “Reference has repeatedly been made to my role as a police officer working in the borough of Scarborough that I must have known that Jimmy Savile was a paedophile.

Cllr Fox apologised to the mayor for raising his voice during the statement, saying he was had “a lot of anger and frustration about this”, adding there had been a “tissue of lies” on the subject.

He added: “When I found out about it I was abhorred. I was very quick to try and bring about this motion.”

Councillor Tom FOX’s loss of composure appears to have been an oblique response to the question I first put to him four months earlier in October 2012:

So did he know or did he not?

I raised that question many times – always without response. Reviewing Councillor Tom FOX’s indignant outburst in Full Council, I find it hard to imagine why he did not simply issue a measured denial at the first time of asking – that may have put the matter to rest.

The SN also reported that a £100,000 statue to SAVILE had been in the pipe-line. Councillor David JEFFELS was quoted, as follows:

Cllr Jeffels said: “People were very enthusiastic about it. No one had any indication or knowledge of his background.”

William Chatt, an independent councillor, argues that the name should remain and the statue should still be erected.

“Jimmy Savile has done a lot for Scarborough,” he says. “These allegations do not detract from the good work he did when he was here, raising so much money.”

As we shall see, Councillor Bill CHATT (Barrowcliff ward) would seem to be unable to grasp the simple fact that “the good work” attributable to SAVILE can never in any way ameliorate, much less eradicate, his horrendous five decades of criminal sexual abuse and rape of minors.

On 13th February 2013, just over a week before the revocation of SAVILE’s Freeman of the Borough status, allegations against SAVILE’s long-time close friend and associate Peter JACONELLI emerged – and were duly reported by the Scarborough New: “Ex mayor was a sex pest”. 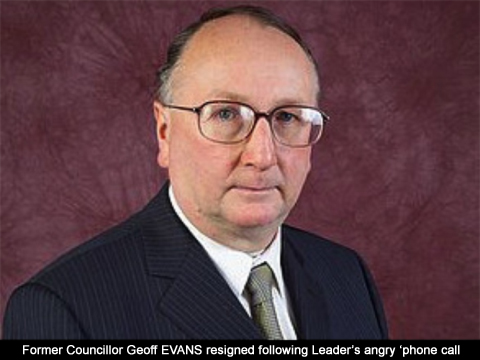 But on 18th February 2103, five days before the Scarborough News covered then-Councillor Geoff EVANS’ public denunciation of Peter JACONELLI, I had written to Councillor Tom FOX posing the following question:

Real Whitby readers will know (and be unsurprised) that I have never received a response. Again, I find it hard to imagine why Councillor Tom FOX did not simply issue a statement at the first time of asking. Why would he wish to keep his options open?

Councillor Tom FOX has clearly been determined not to respond to legitimate questions – and , indeed, seems always to take them personally. Why might that be?

Inexplicably, the revocation of Peter JACONELLI’s civic honours as Alderman and Mayor of Scarborough has taken over a year to materialise – three times as long as the SAVILE expulsion.

As reported in my recent Open Letter to Chief Constable Dave JONES, both the BBC i-Player coverage and that of the Scarborough News website has, for reasons unknown, been removed from their respective web-sites. The North Yorkshire Police have conceded that without the BBC “Inside Out” examination of the Real Whitby evidence, previous decisions not to investigate the JACONELLI allegations would have probably have never been reversed. The entire JACONELLI scandal has been kept as low-key as possible. Why? At whose behest?

Neither of those reports mentioned the fact the Councillor Bill CHATT, himself a former Mayor of Scarborough, had once again expressed the opinion that civic honours accorded to a criminal paedophile should not be revoked. His remarks in Full Council included the following:

This latest reference to money changing hands is far from unique. Several of the victims interviewed by Real Whitby investigators have referred to sizeable pay-offs changing hands in exchange for complaints being withdrawn and charges being dropped. A Barrowcliff man (Councillor Bill CHATT’s ward) asserts that a number of his contemporaries engaged in sexual activity of one sort or another with Peter JACONELLI quite voluntarily, on a regular basis – purely for the ‘easy’ money. Some boys allegedly went further than others, for commensurately larger payments. As Councillor CHATT has indicated, Peter JACONELLI was a generous man. Many of his victims have confirmed that he was opportunistic in his pursuit of sexual gratification.

A letter to the editor of the Scarborough News, published on 22nd May 2014, contains the following admission:

“Indeed, he once gave me a lift and put his hand on my knee, but when I made it patently clear to him that I was not interested, he dropped me off, and I profited to the tune of ten bob, which was a lot of money in those days.”

The writer seems to suggest that the fact that JACONELLI was prepared to pay for sexual services somehow de-criminalises his conduct. This is sheer nonsense. Peter JACONELLI turned innocent lads into male prostitutes. Councillor Bill CHATT knows this, yet still supports JACONELLI.

Councillor Tom FOX, in his Motion to Full Council, made no reference to the widely-held belief that as Chief Inspector in charge of the Scarborough Police, he must have been aware of JACONELLI’s modus operandi. If he was not aware, what prevented him from knowing what every other Officer in his command knew and had known for years?

In my view, Tom FOX needs to tell the public whether or not, as a ranking Police Officer in Scarborough, he knew, for example, about Police cars being requisitioned by Peter JACONELLI to chauffeur him over to County Hall in Northallerton, then on to Leeds for ‘rent boy’ nights out or sessions with SAVILE, before returning him safely to the marital home in the early hours of the morning.  If he was oblivious to these allegedly common occurrences, his competence as a Police Office stands open to question. 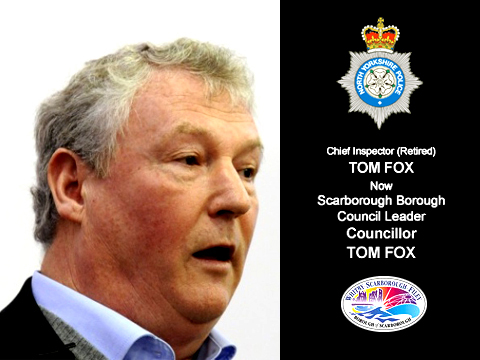 In stark contrast to his SAVILE statement, he wisely made no reference in his JACONELLI speech to any “continued abuse, insinuation and false allegations” or “tissue of lies” regarding his own knowledge of events. I invite him to do so; let us have a transparent account, please.

In his SAVILE statement last year, remember, Councillor Tom FOX was explicit in his categorical denial:

But unfortunately for Councillor Tom FOX,  BBC “Insider Out” viewers have heard and seen how one victim (and there have been more), accompanied by his father, did take a complaint to the Scarborough Police, though nothing came of it. Councillor Tom FOX has not denied it.

In his very low-key JACONELLI speech, there were no florid denials this time around.

And answer me this: why, when there are literally scores of photos (and plenty of film footage) of SAVILE and JACONELLI together, is Scarborough Borough Council pretending there was no connection between these two revocations of civic honours?

Which brings us to the latest turn of events.

In my Open Letter to Dave JONES of 18th May 2014, I made the following point:

But if the Police will do nothing, what of the Council?

Just as he ignored my legitimate questions in the past, regarding the revocation of the civic honours of Jimmy SAVILE and Peter JACONELLI respectively, Councillor Tom FOX has offered no response to my latest question.

I believe I know why.

Councillor Tom FOX already knows that yet another batch of serious allegations of sexual abuse, including rape, has been made against another Mayor of Scarborough in respect of multiple historical offences dating to the autumn of 1983 – though it is not suggested that the alleged perpetrator was Mayor at the time of the alleged offences.

I am certain that Councillor Tom FOX knows about this, because I have raised the matter with SBC’s Director of Legal & Democratic Services Lisa DIXON, who must surely have informed her Leader. How could she not?

Real Whitby sources have confirmed that video-statements by some of the purported victims (whose anonymity is protected by law) have already been recorded by the North Yorkshire Police, who have declined to comment on the matter.

This is standard procedure when an investigation is in progress.

One witness has stated that, when first reporting her allegations to a (named) Police Officer at the Scarborough Police Station, she was told that, given the identity of her alleged assailant, she would be “opening a jar of worms” and that she might want to reconsider the wisdom of filing a complaint at all.

This appears to be a carbon-copy of the treatment received by the BBC “Inside Out” victim, mentioned above.

Is this standard procedure, too?

However repugnant these recurring allegations of sex crimes having been committed by leading Scarborough dignitaries may be to Scarborough Borough Council (and it clearly is extremely abhorrent to Councillor Tom FOX in particular), this continuing policy of  ‘cover it up and play it down’ is totally unacceptable to the public – to whom the Council is ultimately accountable. Or should be. Hopefully will be.

So now is the time for the Council to ‘come clean’ about these new allegations. Can we have a statement, Councillor FOX, please, in response to my very reasonable public interest question?

That small gesture of transparency would start the process of rehabilitating our deeply discredited Council.

And, in the public interest and the interests of transparency, will the Council please name the former Mayor – if only to lift the burden of suspicion from all of the innocent former Mayors of Scarborough  – or is that, too, to be left to Real Whitby?