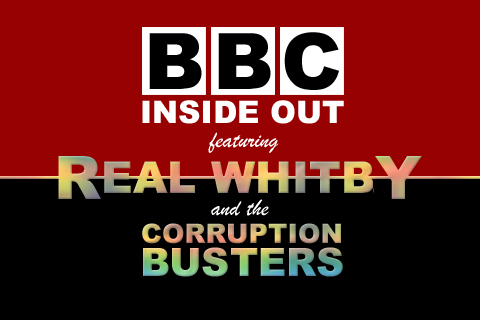 Following a nine-month long in-depth BBC ‘legal eagle’ scrutiny of our numerous reports on Real Whitby regarding evidence of corruption in North Yorkshire, on Monday 10th February 2014 BBC North East & Cumbria broadcast an episode of their award-winning investigative documentary series ‘Inside Out’, presented by award-winning Chris JACKSON. A segment of the program was also aired on BBC Yorkshire & Lincolnshire. It has not escaped many people’s attention that viewers in Scarborough, the nexus of several of the segments, were only able to view the short version. No doubt many of them will, over time, get around to watching it here. Glad to be of service.

In fact, only a representative handful of the issues that Real Whitby has highlighted over the past couple of years lent themselves to the necessarily brief screen-time available (total: 21 minutes). Only these were presented to viewers because some of the more complex investigations would have needed far too long to explain in the necessary detail.

For those who missed the broadcast, the program is available on the BBC i-Player for a short period, after which, it will no doubt be widely proliferated throughout the social video network, starting here on YouTube.

Disappointing, but unsurprising perhaps, was the fact that the BBC could persuade none of the authorities who have sought to smear Real Whitby as “libellers” and “anarchists” to step up to the plate and face the interrogations that we faced. But our paid public servants – forgetting perhaps that we represent (and indeed belong to) the public whom they serve and who have the right and social duty to hold public servants to account – offered only written responses (carefully structured, of course, by their timorous legal departments). They owed it to the public to face the cameras. So did we. But we delivered.

The program should rightly be left to speak for itself. However, one statement provided by Scarborough Borough Council is worthy of special mention since it consists in a blatant lie, astutely spotted and highlighted by presenter Chris JACKSON. Pay special attention to that. It is unremarkable in the fact that it typifies the disingenuous nature of the SBC Legal & Democratic Services department headed by Lisa DIXON, but it is salutary to see it exposed on screen by such a respected and even-handed reporter. Keep it to hand. It will serve as a useful reminder.

Meanwhile, please give Chris JACKSON your best attention. Comment below, by all means – but it would carry a deal more weight if you would comment under your real names – as we do.