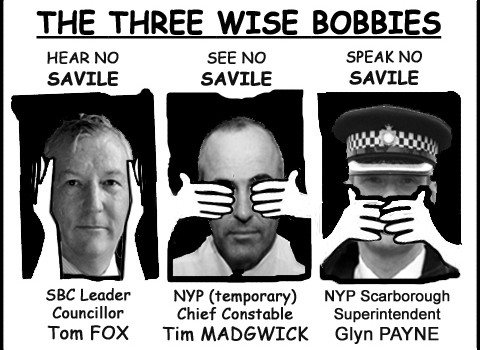 Real Whitby regulars will know that for some time Real Whitby journalists and readers have been making grave allegations that the former Conservative Councillor, Alderman, Mayor of Scarborough (and close associate of fellow paedophile Jimmy Savile) Peter Jaconelli (deceased) was a paedophile who was protected from prosecution for many years because he was a highly influential Conservative politician, prominent businessman, with close connections to the Police and Jimmy Savile.

Jaconelli is a key figure. He established at the Ippon Judo Club in 1955 and started offending, long before Savile came to live in Scarborough. His close association with Savile ensured he was left alone by the Police. We know Savile rewarded Jaconelli with Television appearances on two or three occasions, that Jaconelli provided Savile with access to his icecream parlours where sexual abuse is known to have taken place, and that Savile visited Raincliffe School. It must surely now be a grave concern that Jaconelli abused his position as Governor to reward Savile with access to local school children.

New information has emerged since my last article concerning the influence both Savile and Jaconelli have with Scarborough Borough Council even today.

Savile, Jaconelli and Real Whitby:  The Key Questions and one possible answer

If – as solicitor and Head of Legal and Democratic Services Mrs Lisa Dixon has alleged – Real Whitby’s articles are malicious, untrue and defamatory:

Could it be that some as yet unidentified individual Councillor(s) with influence within the Council is/are trying to silence Real Whitby to continue the cover up over Jaconelli and Savile?

Well, if this is the case, three other questions have to be asked:

I consider this is excessive and unreasonable. After all, SBC were able to produce their press release falsely denying they had attempted to terminate Real Whitby at short notice, and in time for the Whitby Town Council meeting, when it suited them.

Our publishing timetable requires that we need to get another article out before the Whitby Goth Weekend coverage takes over. Having given SBC a day to produce a press response, I had no choice but to publish according to our timetable, although I would have liked to include a comment from SBC.

If any reader has information they wish to pass on to the Metropolitan Police investigation into the activities of Savile and his associates they should contact:

Further to my e mail to Mrs Lisa Dixon below dated 11 April 2013, which has been ignored, please can I have a response Freedom of Information request dated 18 February 2013 concerning the former Conservative Councillor, Mayor and Alderman Mr Peter Jaconelli (Deceased).

Please can you also ensure that Mr Trevor Harrington also receives a response to his complaint about Mr Jaconelli, which is also being ignored.

Please can I have a response to my Freedom of Information Request concerning Peter Jaconelli.

I assert the reason my request is being unlawfully ignored is because Scarborough Borough Council does not want to admit that the allegations of Councillor Evans and others that Jaconelli was a paedophile and the police and council protected him because he was the mayor and a prominent Conservative are substantially correct.

I look forward to hearing from you or from someone in Scarborough Borough Council in due course.

Thank you for your written communication of 18 February 2012.  The information that you require is not included within the Council’s formal publication scheme and a referral has been made to the responsible officer to collate a response.

You may expect to receive a response to your request by 18 March 2013, that is within twenty working days of its receipt by the Council.

In some circumstances a fee may be payable and if that is the case, we will let you know. A fees notice will be issued to you, and you will be required to pay before we will proceed to deal with your request.

Please ensure that any further communication in relation to this matter is sent by you to the Freedom of Information Officer at the above address quoting the reference in the subject line of this communication.