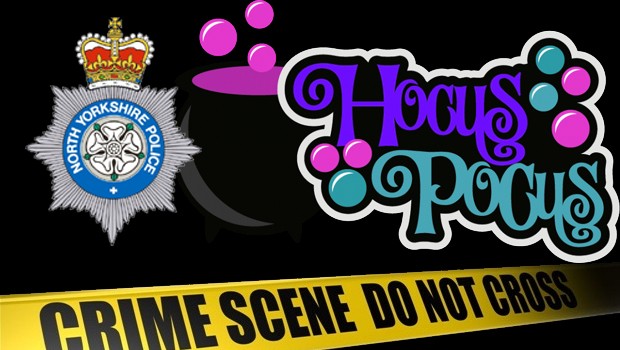 A very good article in the Daily Mail caught my eye recently, it summarises all of the ongoing historic child abuse investigations currently being conducted by the British Police service. Taking this and other sources, they are as follows:

Operation Yewtree into Jimmy Savile and his associates

NYE investigation into Savile and a Westminster paedophile ring here.

Operation Fairbank an investigation into a powerful paedophile network linked to Parliament.

Operation Daybreak and Operation Xeres into abuse at children’s homes.

Operation Tweed an investigation into allegations of abuse at Underley Hall, and Witherslack Hall School.

Operation Dunhilll and Operation Perry into allegations of child abuse by members of the clergy.

Five separate investigations, including one at St Stephen’s Church in Kirkstall, Leeds.

Nine investigations, including one at Terra Nova prep school.

Four investigations. One at Manor Court Children’s Home in Nuneaton.

Investigations at schools at Great Finborough, Stowmarket and Kesgrave.

Two investigations at schools in Chepstow.

One investigation into former House of Commons Speaker Viscount Tonypandy.

Investigation into a Bristol care home.

Sir Peter Fahy called on to step down

Investigation into the Kincora Boys Home which is also alleged to implicate MI5.

But wait a minute.  North Yorkshire Police Not Mentioned?

WHAT? Why is that? The major failures to arrest Savile and wind up the Westminster and Scarborough paedophile-rings all occurred in North Yorkshire:

North Yorkshire Police knew all about the Scarborough ring – yet did nothing and kept what it knew to itself.

So why is it that North Yorkshire Police are not mentioned in the above article and have fallen off the radar?

Operation Hibiscus was led by Detective Superintendent Steve Smith, Director of the Force Intelligence Bureau, the Department under investigation for the Operation Spade fiasco. 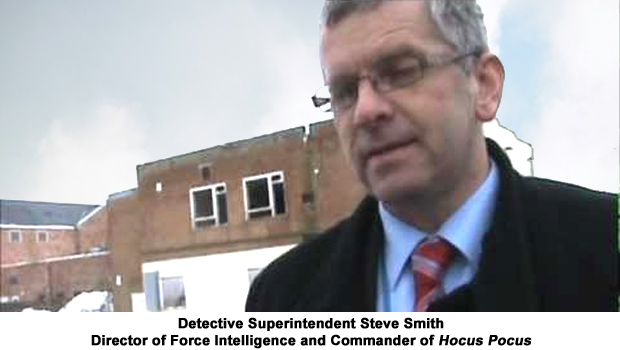 It essentially admitted (after four previous investigations that were cover-ups) that there had been a major paedophile-ring operating in Scarborough which NYP knew about and failed to act upon – as consistently alleged by the North Yorks Enquirer. The investigation was started solely due to media pressure from the NYE team and Real Whitby following a BBC ‘Inside Out’ investigation BBC investigation 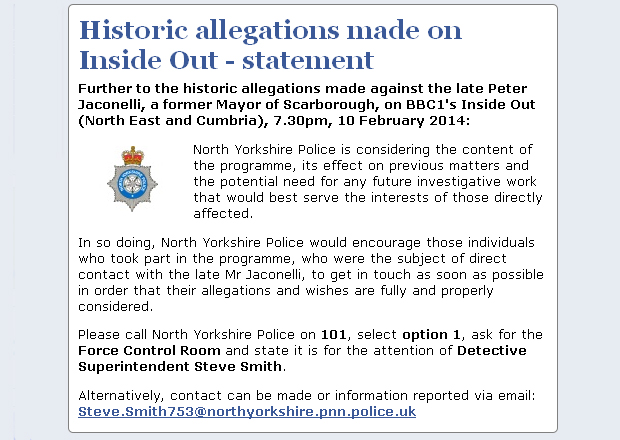 In his statement above, ACC Kennedy refused to comment further on why his force failed to arrest Savile and Jaconelli. Operation Hibiscus was then closed. It has become known locally as Operation Hocus Pocus because nothing has been said about the following aspects of the case, which have all been conveniently ignored and kicked into the long grass:

This represents a major success for North Yorkshire Police, which has obviously never wanted a full and rigorous enquiry. It has effectively weathered the storm of media criticism.

Acting in the public interest, the North Yorks Enquirer is continuing to press for an impartial investigation into the Scarborough ring and the protection it received from North Yorkshire Police. We are forwarding additional evidence to the Home Office Enquiry by Her Honour Justice Goddard as it becomes available, so that there is some possibility of getting to the truth. It will not emerge while the IPCC and North Yorkshire Police conduct the investigation.