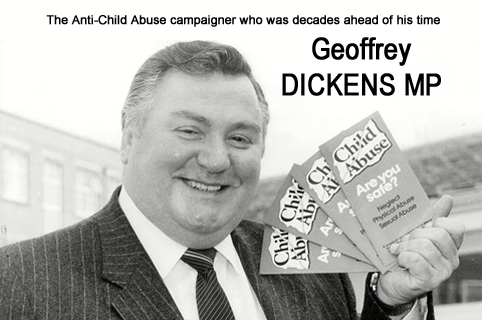 A lot has happened since my last article on the Peter Jaconelli scandal was published on the 7th of July 2014: Former Whitby MP interviewed by police

The Church of England is braced for more sex abuse claims:  http://www.bbc.com/news/uk-politics-28283480

His Holiness Pope Francis has been quoted as saying that 2% of Catholic clergy may be paedophiles and he is determined to root them out: http://www.bbc.com/news/world-europe-28282050

The Home Office has announced an investigation by Mr Peer Wanless chief executive of the NSPCC which will cover how police and prosecutors handled intelligence given to them and concerns allegations that the Home Office failed to act on allegations of child sex abuse contained in a dossier handed over to the Home Secretary in the 1980s by the late Geoffrey Dickens MP.  A Hillsborough-style inquiry will also be held staffed with independent experts on child protection. 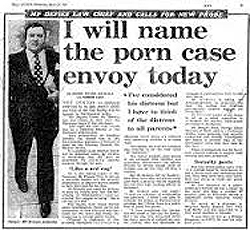 Mr Cameron told the Commons it may well be time” to change the law to enforce mandatory reporting of child abuse.  Mr Wanless is reported as having urged prosecution for people who cover up such crimes.

Another independent inquiry, looking at historical sexual abuse and institutions’ protection of children has been initiated.  This was to be led by the eminent and impressive retired senior Judge Baroness Elizabeth Butler-Sloss, but she has resigned following public criticism of her appointment because of concerns about conflicts of interest. The article also mentions the major enquiry by North Yorkshire Police code-named Operation Hibiscus into its failure to arrest Jaconelli, which has involved a team of detectives with a Detective Superintendent overseeing it, and so far has not arrested anyone – although one journalist (yours truly)  has been threatened with arrest for providing North Yorkshire Police with evidence indicating misconduct by Police Officers, which it did not want to hear. The Chief Constable and Police & Crime Commissioner are both fully supporting the Deputy Chief Constable over his decision to threaten me with arrest for criticising North Yorkshire Police regarding its failure to arrest Peter Jaconelli and Jimmy Savile.  The Officer commanding Operation Hibiscus – Detective Superintendent Steve Smith – refuses to respond to correspondence on allegations of misconduct by other members of his force that affect his investigation.

Again this has resulted in allegations of misconduct by senior Officers

The book “In Plain Sight – the Life and Lies of Jimmy Savile” by Dan Davies, to which the North Yorks Enquirer has contributed, has been published today, Monday the 14th of July. 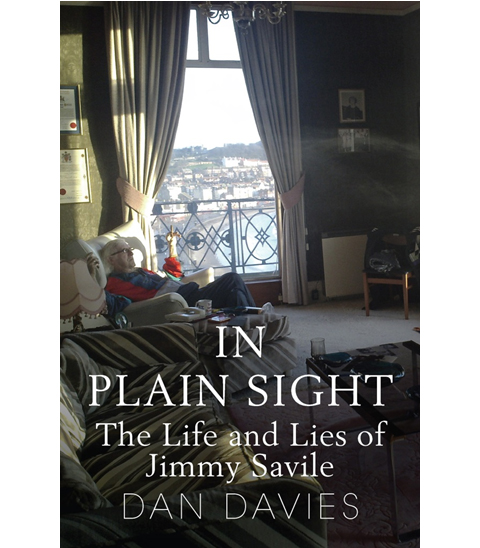 It will go down as the definitive account of Jimmy Savile.  It is Reviewed here and also mentions inappropriate conduct by Officers of North Yorkshire Police with Savile. 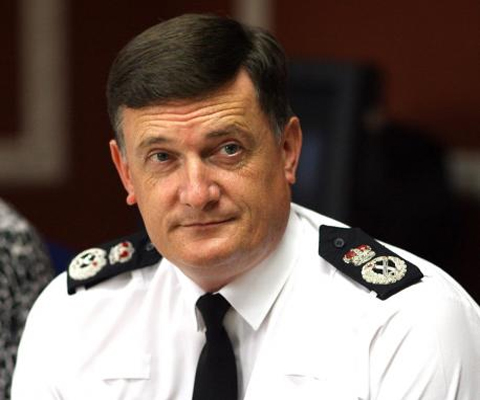 Chief Constable Maxwell (pictured above) provided Savile with a Police car to transport him around and shared a platform with Savile at an event organised by North Yorkshire Police for young people, where he was held out as a role model even though is force knew he was being investigated for serious sexual offences by Surrey and Sussex police at the time.

However, it is the Home Office review and the Private Eye coverage that I want to focus on.

The impact of these national developments on North Yorkshire.

For new readers to the North Yorks Enquirer, Peter Jaconelli was a Scarborough Borough Councillor, a North Yorkshire County Councillor, Mayor of Scarborough, Alderman and a wealthy businessman.  He has now been stripped of the titles of Honorary Alderman and Mayor over his paedophile offending.  Jaconelli  is alleged locally to have abused children whom he employed, at his Ippon Judo Club, from schools where he was the Governor (where he introduced Savile) and to have enticed children into prostitution.  Witnesses have come forward to the North Yorks Enquirer and a local charity (H.O.P.E.) making credible allegations of rape by Jaconelli.  It has been repeatedly alleged that North Yorkshire Police were completely aware of Savile and Jaconelli’s offending in Scarborough and Whitby but protected them because of Jaconelli’s position and influence as Mayor and leader of Scarborough Council.  These allegations of corruption in North Yorkshire Police have been repeated in the national media.

On this basis, North Yorkshire Police were excluded from the HMIC, Home Office and IPCC investigations into Savile, although in fact he was well known by North Yorkshire Police to have extensive “local connections” and complaints had been made to Scarborough Police about him.  North Yorkshire Police could have arrested Jaconelli and Savile in the 1970’s, but this was not mentioned in the statement by the Home Secretary on the failure of the British Police Service to arrest Savile to Parliament on the 12th of March 2013:

“In particular, I asked that the review establish clearly which forces received reports or allegations in respect of Savile and related individuals prior to the launch of Operation Yewtree on 5 October 2012. For each of those forces, I asked HMIC to review the extent to which the allegations were robustly investigated and whether there were any police failings in doing so. HMIC have concluded their review and today published their report. A copy will be placed in the House Library.  HMIC conducted enquiries in all 43 police forces in England and Wales, and liaised with HMIC Scotland and the States of Jersey Police. Their review finds that, as far as police records disclose, five allegations of child sexual assault were made against Savile to the police between 1958 and 2009. In addition to these recorded allegations, the Metropolitan Police Service (MPS) has traced two historical intelligence entries relating to Savile.”

North Yorkshire Police have now admitted that Jaconelli was a paedophile and that he was offending in Scarborough and Whitby.  It has also admitted that Savile was known to them at least ten years ago.  Our information is that in fact it was aware of Savile’s offending in the 1970’s and of Jaconelli’s in the 1950’s, but this was excluded from the Home Secretary’s statement, the IPCC investigation and the HMIC investigation.

Mr Wanless’s inquiry is into allegations that the Home Office failed to act on allegations of child sex abuse raised by contained in a dossier handed over in the 1980s by the anti-child abuse campaigner, the late Mr Geoffrey Dickens MP to The Right Honourable The Lord Brittan of Spennithorne QC PC DL when he was Home Secretary, about powerful and famous figures, including politicians who were involved in sexually abusing children.  Peter Jaconelli was a Conservative Scarborough Borough Councillor and a leading member of Scarborough & Whitby Conservatives while Lord Brittan was the prospective Parliamentary candidate and in due course the MP for Whitby.

I understand that Mr Jaconelli was known personally to Lord Brittan at that time.  He was also known to the Cleveland MEP Sir Peter Vanneck, whose PA I understand was the young Jane Kenyon.  It was common knowledge in Scarborough and Whitby that Jaconeli was a paedophile and this has been confirmed by multiple witnesses.  It has also been confirmed that it was common knowledge in Whitby that Jaconelli and Savile would travel to Whitby in Savile’s Rolls Royce and pick up young people of both sexes from the Wimpy Bar opposite Whitby Police Station, take them away in Savile’s car, abuse them and then pay them off. Dickens was nobody’s fool. His attitude towards and vehement opposition of sexual abuse of children were decades ahead of his time. His investigation into Paedophile Information Exchange member Sir Peter Hayman who is thought at one time to have been the Deputy Director of MI6, whom he revealed as a paedophile and a security risk, was skilful, and supported by evidence and entirely accurate.  He suffered a backlash as a result of the principled stance that he took.  On the 29th of  November 1985, Dickens said in a speech to the Commons that:

“The noose around my neck grew tighter after I named a former high-flying British diplomat on the Floor of the House. Honourable Members will understand that where big money is involved and as important names came into my possession so the threats began. First, I received threatening telephone calls followed by two burglaries at my London home. Then, more seriously, my name appeared on a multi-killer’s hit list”.

Dickens’ son later said that about the time when the dossier was given to the Home Secretary, the MP’s London flat and constituency home were both broken into but nothing was taken, presumably in a search for documents.

Mr Dickens was closely associated with Yorkshire and would have known of Peter Jaconelli through his close connections to Yorkshire Conservatives generally, via his membership of Conservative Party regional grouping the Yorkshire and Humberside Conservative Association, and from Jaconelli’s activities and reputation locally as a leading Yorkshire Conservative and North Yorkshire County Councillor.  So common was knowledge of Jaconelli’s  offending that it is inconceivable that he would not have known of these allegations.  It is entirely credible that Jaconelli was one of the prominent persons mentioned in the dossier that Mr Dickens passed to the Home Office.  I suspect that Savile may have been another.  Copies of the dossier may still exist and may yet surface, so we shall see. What does the future hold?

We do not know.  However, NYE will continue to cover this issue as it develops.

North Yorkshire Police was responsible for the four most important failures to arrest Savile and the rest of the ring:

Clearl,y this would have been very embarrassing to North Yorkshire Police had it come into the public domain – hence NYP’s evident determination to evade any responsibility for its failure to arrest Savile or Jaconelli and the extreme measures it has gone to, to prevent exposure of this aspect of the Savile investigation.

The increased scrutiny of North Yorkshire Police as a result of these developments and the new proposals to make it an offence not to report sexual offences must be getting a lot of serving and retired police officers very uncomfortable.  Worse still is the knowledge that new legislation does not have to be passed to ensure the arrest of police officers over their failure to arrest Jaconelli and Savile.  Legislation exists currently which could still result in them being the subject of a criminal prosecution for misconduct in public office, over the policy that existed of protecting senior conservative politicians and public figures from prosecution.  This is particularly relevant, given that this policy continues to this day.

Chief Inspector Tom Fox (retired), now Councillor Tom Fox, Leader of Scarborough Borough Council is failing to respond to correspondence and complaints about Councillor Jane Kenyon-Miller, thereby protecting her from any censure over her conduct on this matter or her failure to properly and openly declare her interest in Belvedere Computers Inc in her register of interests – a criminal offence under the Localism Act 2011.  Full story on the Belvedere Computers Inc cover up here.

The conclusion is inescapable that Councillor Kenyon-Miller is being protected in exactly the same way that North Yorkshire Police protected Jaconelli. Witness the threats by North Yorkshire Police to arrest me over my investigation into Councillor Jane Kenyon-Miller’s Belvedere Computers Inc tax fraud and the demands that I take down my articles from the internet covering this scandal.