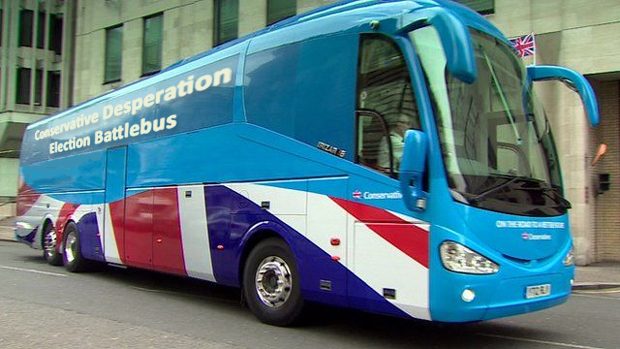 With the North Yorkshire County Council elections seven weeks away, the Scarborough & Whitby Conservative Association, painfully aware of the absence of all credibility in the party locally (contingent upon the tsunami of NO CONFIDENCE in SBC Leader Councillor Derek BASTIMAN [Con.] and his bottom-of-the-barrel Cabinet), has rolled out one of its relatively new kids on the block to front the salvage job necessary to keep the Tory trotters in the North Yorkshire trough – Cabinet Portfolio Holder for Strategic Transport, Transport Services and ICT, Councillor John NOCK [Con.].

Whitby Tory SBC Councillors David “Slim or No” CHANCE [Con.] and Joe “Frank & Honest” PLANT [Con.], having earlier rolled out NYCC Leader Councillor Carl LES [Con.] for a Gazette photo-opportunity to beat the Whitby Piers drum (just as in 2015, when MP Robert “Air Fares” GOODWILL [Con.] did the honours) may wish they had handled the task themselves. Neither is good for much, true, but they would have found it difficult to do worse than Councillor NOCK’s blatantly biased mud-slinging.

One cannot help but wonder what County Councillor Carl LES [Con.], the only North Yorkshire Tory to have apologised to the victims/survivors of predatory paedophile Peter JACONELLI, really thinks about sharing a platform with a JACONELLI apologist . . . other, perhaps, than “needs must when the Devil drives“. 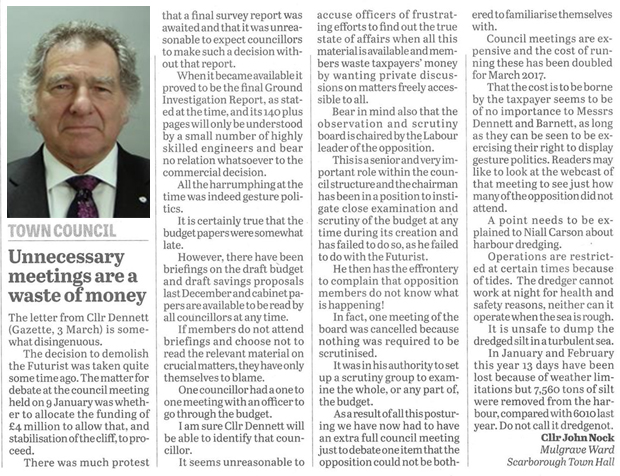 It does not stand up to examination.

Firstly, the decision to demolish the Futurist was not taken “some time ago”, as the Tories keep pretending.

In fact, the decision to REGENERATE the Futurist site was taken “some time ago” – in January 2016 – without any specific reference to demolition.

As the vote on 9th January 2017 (22:21) clearly showed, had demolition ever been specifically spelt out, there would have been vociferous objections back then, instead of support for a regeneration proposal in which “demolition” was carefully concealed. Councillor NOCK may genuinely have forgotten that the Opposition was sand-bagged; the public has not. County & Borough Councillor Janet JEFFERSON [Ind.] made this abundantly clear in her letter to the Scarborough News.

Such is the weasel-worded vocabulary of Councillor NOCK – who, lest we forget – wriggled out of any substantive sanction for his shameless defence of Peter JACONELLI on the grounds that JACONELLI (unlike Jimmy SAVILE) was not a paedophile but merely a “hebephile” (one whose sexual preference is for 11-14 year-olds). Astonishingly, Councillor John NOCK [Con.] even attempted to offset his guilt by claiming that it was Councillor BARNETT [Lab.] and Councillor DODDS [Ukip] who had brought the Council into disrepute – by reporting NOCK’s remarks to the Monitoring Officer.

I believe Councillor NOCK has a son. Presumably, Councillor NOCK would have had no objection to Peter JACONELLI messing with NOCK Junior when he was 11-14 years old? Bizarre, isn’t it? Ludicrous.

Councillor John NOCK [Con.] goes on to describe the caution evinced by many – including some Tories (not least, Leader-in-Waiting Councillor Andy BACKHOUSE [Con.]) – regarding the Futurist Ground Investigation Report (GIR)as “gesture politics”. Then again, Councillor NOCK may genuinely have forgotten that the Opposition was sand-bagged over the GIR, just as it was about the “demolition”; the public has not.

The truth of the matter is that the stability of the escarpment behind the Futurist is of vital importance – not least to residents whose homes may be at risk.

And it is interesting to note that when Councillor NOCK reproaches Councillor DENNETT with another coat of his “gesture politics” varnish, he gratuitously throws in Councillor BARNETT, who played no part in the letter to the Gazette from Councillor DENNETT, to which Councillor was purporting to respond. Is this the spiteful expression of a mean-spirited grudge I see before me? (“You told tales on me; I’ll get you back!” – Kindergarten politics).

Next, Councillor NOCK, whilst conceding that the budget paperwork was indeed provided to Councillors only at the eleventh hour, seeks to blame them for not attending briefing meetings – at which the material was not all available anyway. He then goes on to blame “one Councillor” (identity withheld) for wasting Officer-time in a futile attempt to get to the bottom of the mystery budget – and wasting public money on an entirely necessary Extraordinary Meeting to ratify a budget delayed by Officer incompetence and Cabinet feet-dragging.

Of course, unnecessary Standards Complaints are a waste of money, too, when the outcome is as pathetic as a perfunctory mini-bollocking from the Chair of one’s own party.

And within this culture of secrecy, Councillor NOCK proceeds to heap scorn on the Opposition Leader, Councillor Steve SIDDONS [Lab.], for failing to scrutinise that which should, by rights, be openly available in the first place but, in reality, is carefully kept from view.

And an open and honest man would have included an explanation for why the previous year’s accounts have still not be signed off by Auditors MAZARS – whose “independent investigation” into the Ben MARRIOTT allegations of fraud and corruption within the Council is now long overdue – and doubtless another waste of money. Perhaps Councillor NOCK would like to raise that with the Chair of the Scrutiny Board – Councillor Steve SIDDONS [Lab.]?

Councillor John NOCK [Con.] is also disingenuous on the matter of the dredger – known around the harbour as ‘HMS DREDGENOUGHT’.

In fact, the dredger really has been dredging – and that will be the subject of a future article exposing SBC’s apparent disregard for the legal requirements of another expensive (for the Council) out of court settlement, studiously omitted from SBC’s Press Releases.

Presumably, the Gazette will afford Labour Councillors BARNETT, DENNETT and SIDDONS their ‘right of reply’.

But the sad truth is that all too many Gazette readers will likely take NOCK’s knocks at face value – and return him and his fellow failures to office.

Best keep an eye on the North Yorks Enquirer Bullshitometer . . . this letter from Councillor John NOCK has sent it way into the red. Of course, anyone can spout bullshit and this mealy-mouthed Tory minnow has finally found an opportunity to excel.